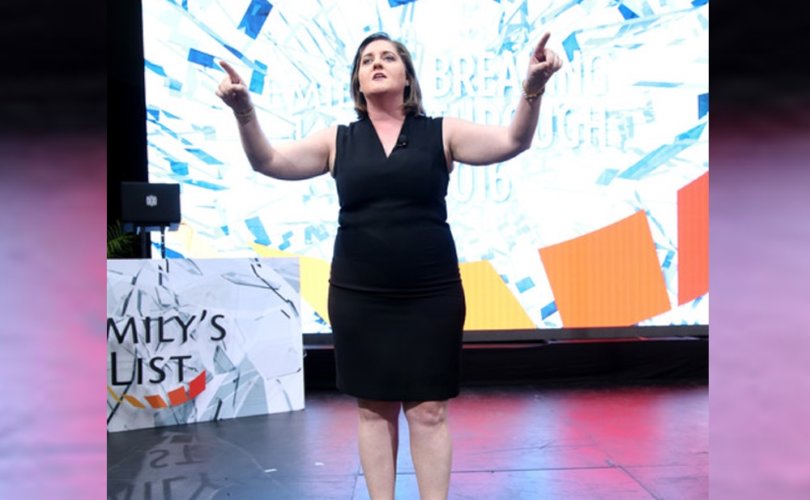 Democratic National Committee (DNC) chairman Tom Perez announced that his party will be led by Jess O'Connell, a 43-year-old abortion activist who is an open “married” lesbian. O'Connell most recently led EMILY'S List, a national pro-abortion organization devoted exclusively to electing female abortion activists into positions of influence in government.

A party representative noted with a touch of pride that O'Connell will be “the first openly gay staffer leading the DNC.”

O'Connell, known as a big-dollar fundraiser for female pro-abortion politicians, takes the DNC reins to oversee political strategy. She will also hire and coordinate key DNC staff, and lead day-to-day operations for the party.

Additionally, O'Connell will assist Hillary Clinton's “Resist” movement in opposing the Trump presidency, including a new training program for anti-Trump activists in the “Resistance” movement.

Critics say that after last year’s losses, the Democrats are self-destructively digging their heels deeper into the causes that led to their upset.

“The hiring of O’Connell may pull the DNC further Left on issues like abortion and put them…further away from resolving the crises plaguing the Democratic Party,” NeedToKnowNetwork reported.

Pro-life-and-family organizations see the new hire as proof that the DNC is simply continuing its long-established course as the party of abortion, homosexuality, and transgenderism.

Marjorie Dannenfelser, president of the Susan B. Anthony List, said Democrats moving further Left is indirectly helping the prolife cause.

“As they push their party more and more to the extreme on abortion, the GOP benefits at the polls,” she said. “Never has it been so clear: on abortion, there is no room for dissent or exceptions among Democrats, only support for the party’s radical platform which calls for abortion-on-demand up until the moment of birth, paid for by taxpayer dollars.”

Tony Perkins of the Family Research Council agrees, stating that “the choke-hold of groups like Planned Parenthood and NARAL (the National Abortion Rights Action League) is even stronger now” with O'Connell as CEO.  He characterizes the Democrats as “the party that talks about diversity but never practices it.”

Perkins critiqued the O'Connell hiring as only taking the Democratic Party further away from the average voter. “By almost everyone's estimation, the Left's extremism on issues like abortion and transgender bathrooms cost them the White House,” he said.

“That's why Donald Trump is president of the United States — the evangelicals and the Catholics, anti-marriage equality, anti-choice. That's how he got to be president,” she told the Washington Post.

Earlier this year, Perez issued a statement declaring support for abortion is “non-negotiable” in his party.

“Every Democrat, like every American, should support a woman’s right to make her own choices about her body and her health. That is not negotiable and should not change city by city or state by state,” he said.

In her first words as CEO, O'Connell vowed to make the Democratic Party “more inclusive,” a common euphemism for promoting the normalization and acceptance of homosexual behavior.

“I’m ready to jump in and help make this organization more inclusive, effective, and influential,” she said.

O'Connell is “married” to her “wife” Holly, a librarian for the Montgomery County schools in Maryland.

The party selected O'Connell with the hope of gradually rebuilding the party after a disastrous election year. The top priority on the Democrats' agenda is trying to restore overwhelmingly lost public trust.

“Jess knows that…we need to organize in every zip code and better communicate our message of inclusion and opportunity,” Perez said.

O'Connell was the National Director of Operations for Hillary Clinton's failed presidential primary in 2007.  After that, she was Chief of Staff and a Senior Vice President for the Center for American Progress, an ultra-liberal think tank dubbed by Time magazine as singularly holding “sway” over the Obama Administration.

The Center for American Progress drew national attention during the 2016 presidential election for ridiculing both Evangelicals and Roman Catholics in private emails exposed by WikiLeaks.

Some grassroots members of the DNC’s own party have taken to social media to express criticism of the O'Connell hire.

“I have not given a dime to the DNC since last May when the emails came out,” Chris McCoy commented on Facebook, “and I will not be giving another dime or volunteering, until there is a concrete plan in place to guarantee the DNC is a fair and open arbiter of the voters' will, and not just a front for backroom deals.”

“The DNC [is] wasting more money on another Clintonite,” John Kennedy responded. “The DNC clearly is unwilling to change or take any of the power away from the corporate donors,” he added.