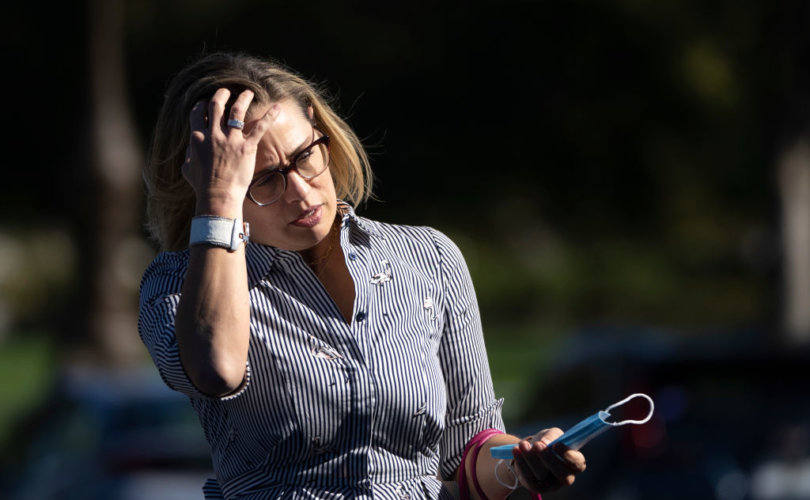 “Electing Democratic pro-[abortion] women is not possible without free and fair elections,” said Laphonza Butler, president of EMILY’s list, in a press release. “Protecting [abortion] is not possible without access to the ballot box. So, we want to make it clear: if Sen. Sinema cannot support a path forward for the passage of this legislation, we believe she undermines the foundations of our democracy, her own path to victory and also the mission of EMILY’s List, and we will be unable to endorse her moving forward.”

The “path forward” described by Butler is the abolition of the Senate filibuster rule. Removal of the filibuster is part of the Biden administration’s and Democrat party’s strategy to advance abortion without limitation in the U.S. However, Sinema and Sen. Joe Manchin (D-WV) still stand in the way of this initiative by opposing the filibuster’s removal.

The rule is currently responsible for blocking Democrat plans to make it easier to enact so-called voter’s rights legislation. This legislation, however, has little to do with voter’s rights and everything to do with cementing Democrat-driven fraud into the election system. This, in turn, would make it easier to elect and potentially near impossible to remove pro-abortion politicians.

The pressure placed on Sinema, who has a 100% pro-abortion rating by Planned Parenthood, in a formal announcement by EMILY’s List leaves no doubt about this strategy.

“Right now, Sen. Sinema’s decision to reject the voices of allies, partners and constituents who believe the importance of voting rights outweighs that of an arcane process means she will find herself standing alone in the next election,” Butler explained.

“EMILY’s List is laser-focused on the 2022 elections–holding the House and Senate, electing governors and state legislators. Understanding that access to the ballot box and confidence in election results are critical to our work and our country, we have joined with many others to impress upon Sen. Sinema the importance of the pending voting rights legislation in the Senate. So far those concerns have not been addressed.”

“We are at an inflection point in the fight for voting rights and reproductive freedom, and Democrats must stand together to protect those critical rights,” concluded Butler.  “EMILY’s List is proud to stand with Democratic pro-[abortion] women doing that work, today and every day.”