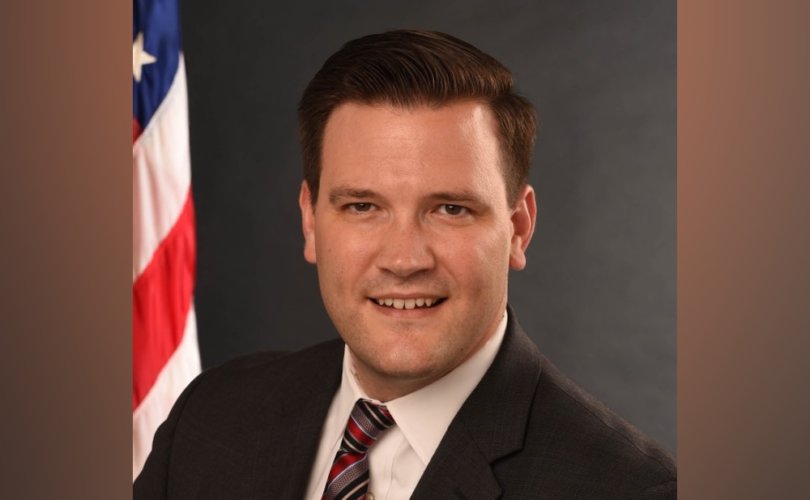 WASHINGTON, D.C., August 24, 2018 (LifeSiteNews) – Scott Lloyd, the director of the Office of Refugee Resettlement (ORR) in the Trump administration’s Department of Health and Human Services (HHS), became the latest target of pro-abortion ire this week following Mother Jones’ publication of excerpts from a pro-life essay he wrote in law school.

A father of six who formerly worked for the Knights of Columbus and has written articles for the National Catholic Register and Ethika Politika, Lloyd is one of the Trump administration officials who has played a direct role in the fight to save preborn babies from abortion. He has combatted abortions for illegal immigrant minors in federal custody.

One such case made national headlines last year, in which the left-wing American Civil Liberties Union (ACLU) successfully facilitated a 17-year-old “Jane Doe’s” abortion following a court battle. That fight already established Lloyd on the abortion lobby’s enemies list, and this week’s revelations have reignited the attacks.

In 2004, as a law student at Catholic University, Lloyd wrote a six-page essay for a course on Catholic social teaching. Written for an assigned class discussion, the piece made a deep impression on his classmates for both his intense condemnations of abortion and his candid account of reluctantly agreeing to pay for an abortion.

Since then “I’ve realized that absolutely every single reason to support an abortion is a distortion of the truth,” Lloyd wrote. “Two steps beyond all of them is a proper investigation of the matter, and two steps back reveals the fear and selfishness behind them.” Lloyd concluded he could not “support abortion for any reason” including in “cases of rape, incest, and danger to women.”

The essay covers a wide-ranging exploration of the issue, from the “careless[ness]” of “hav[ing] sex when [one is] not ready to be pregnant,” to his contention that it was insulting to assume “any of the female deans or professors at our school” needed abortion to be successful, to the fact that pregnancy involves not just a woman’s rights, but “a fetus’s right to life, and […] a father’s right to be a father.”

In the passage that arguably provoked the strongest reaction, Lloyd argued that abortion was the “exact same thing” the Nazis did in the Holocaust.

“The Jews who died in the Holocaust had a chance to laugh, play, sing, dance, learn, and love each other. The victims of abortion do not, simply because people have decided this is the way it should be, not through any proper discernment of their humanity,” he maintained. “Neither type of murder is more or less tragic, but don’t fool yourself into thinking that they are not both tragedies, and they are not both murder.”

Without explicitly confirming the essay’s authenticity, a HHS spokesperson told The Hill that Lloyd “has testified publicly to his personal and religious beliefs regarding abortion, and explained he does not let his religion guide his job as ORR director.”

The essay has provoked a torrent of hostile commentary from pro-abortion groups and publications.

Jezebel’s headline claims it was “so extreme that a classmate kept a copy for 14 years,” The Mary Sue blogger Vivian Kane quipped that it reads “like a mediocre villain origin story,” and the so-called Center for Reproductive Rights demanded his “immediate removal” from office. “To call Lloyd’s beliefs fringe would be an understatement,” The New Republic’s Sarah Jones claims.

“When a woman Scott Lloyd slept with got pregnant, he took her to get an abortion,” the Planned Parenthood Action Fund tweeted. “This is the same Scott Lloyd who abused his power to block access to safe, legal abortion.” Headlines at The Cut (reprinted by Yahoo), The Pool, The Daily Kos, and Vice Broadly highlighted the same detail, framing it as evidence of hypocrisy rather than a conversion story.

“Comparing systematic genocide to our constitutional right to make our own private healthcare decisions is absolutely appalling,” NARAL declared, without addressing the established biological fact that abortion ends human lives.

Pro-lifers, meanwhile, contend that Scott Lloyd is a hero.

The ORR chief “should be praised for courageously offering real relief and protection to those in his care, rather than exploiting and politicizing them,” according to Tom McCluskey of the Family Research Council. “Serving as the temporary custodian of vulnerable minors—both sentient and preborn—is a responsibility Lloyd takes seriously,” Focus on the Family’s Bruce Hausknecht has written.

“Lloyd should be applauded for his work, and instead he’s being demonized and personally attacked,” the Susan B. Anthony List’s Billy Valentine and Charlotte Lozier Institute’s Chuck Donovan wrote last October. “The early end of the life of baby Doe is a blot on our nation and a mark against the claims of certain groups that they ‘welcome the stranger.’

“That is sad enough, but to turn this profound debate about the width of America’s golden door into a smear of someone like Lloyd is worse than a blot—it is a disgrace,” they lamented.