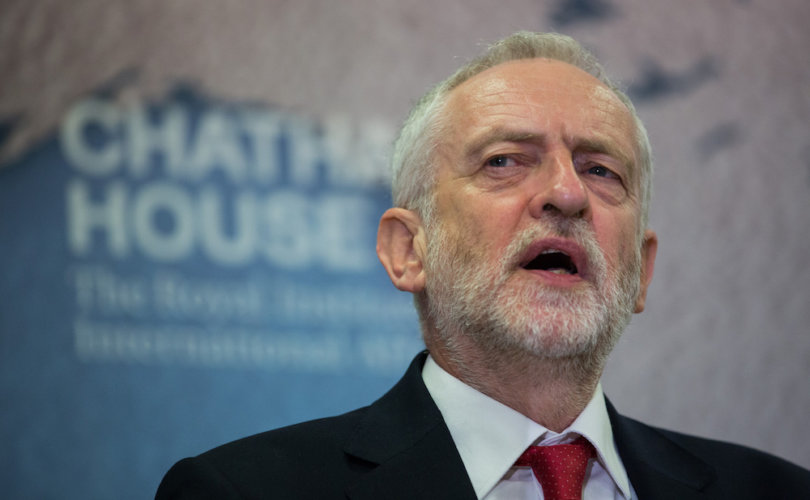 “Socialism may not be Jeremy Corbyn’s only religion,” the New Statesman reported, asking if Corbyn is a secret Catholic. According to the report, Corbyn received Holy Communion, which the Catholic Church teaches is the literal body, blood, soul, and divinity of Jesus Christ, during the funeral of fellow politician Mary Turner at Sacred Heart Church in north London.

A spokesperson for Corbyn then said he hasn't become Catholic.

Only baptized Catholics may receive Holy Communion, according to the laws of the Church.

“At the heart of the Eucharistic celebration are the bread and wine that, by the words of Christ and the invocation of the Holy Spirit, become Christ's Body and Blood,” the Catechism of the Catholic Church teaches (CCC 1333).

Dr. Joseph Shaw, an Oxford professor and the Chairman of the Latin Mass Society, said this incident shows priests need to properly explain the significance of the Eucharist and the Church's guidelines for receiving it.

“We should be charitable to Mr. Corbyn and assume that he didn't know any better, but his reception of Holy Communion at a Catholic funeral Mass underlines the need for priests to make clear that it is not just for anyone to go up for Communion,” Shaw told LifeSiteNews.

“Indeed, the practice of all Catholics going up without thinking twice about it can create a sense of exclusion for non-Catholics at events like weddings and funerals which would not have arisen in earlier times, when the need for careful preparation was taken more seriously by Catholics,” he continued. “The result can be events like this which turn out to be embarassing for everyone involved, as well as disrespectful to our Lord in the Sacrament.”

Before receiving Holy Communion, Catholics used to be required to fast starting at midnight. Pope Pius XII changed the required fasting time to three hours in 1957; Pope Paul VI reduced it to one hour in 1964.

Corbyn won't publicly say what his religious beliefs are, arguing that they are “private.”