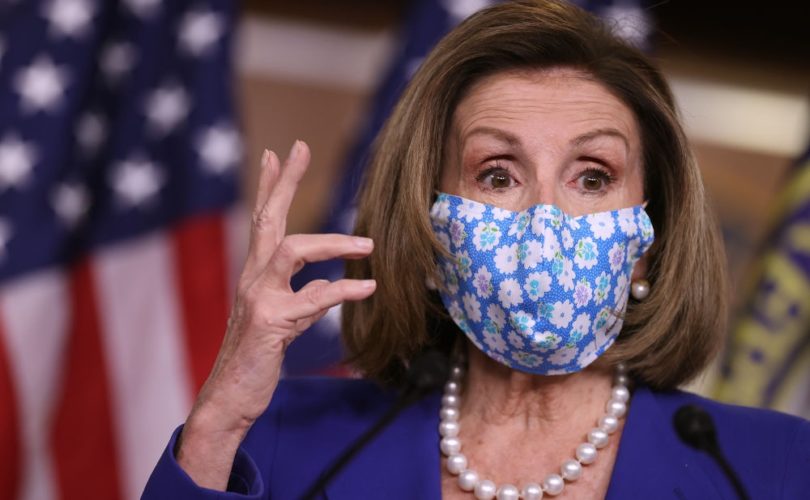 WASHINGTON, D.C., May 14, 2021 (LifeSiteNews) – Democrat House Speaker and pro-abortion “Catholic” Nancy Pelosi again defended her practice of taking Holy Communion despite flouting her church’s rules on the protection of human life this week, citing for support a recent letter by a Vatican official pushing back on American bishops’ efforts to confront the question.

“I think I can use my own judgment on that but I'm pleased with what the Vatican put out on that subject,” Pelosi said in response to a question just before ending her weekly press conference, Fox News reports. “Did you read that? It basically says don't be divisive on the subject. Thank you.”

The issue was brought to the foreground recently by the U.S. Conference of Catholic Bishops’ (USCCB’s) work on a document about Catholic politicians’ fitness to receive Communion if they defy Catholic teaching on abortion and other issues of human life.

On May 7, Cardinal Luis Ladaria of the Vatican’s Congregation for the Doctrine of the Faith (CDF) wrote to USCCB president Archbishop José Gomez claiming that doing so could “become a source of discord rather than unity within the episcopate and the larger church in the United States,” urging the statement to be “framed within the broad context of worthiness for the reception of Holy Communion on the part of all the faithful” instead of specifically about the problem of pro-abortion Catholic politicians, and insisting that abortion and euthanasia not be presented as the “only grave matters of Catholic moral and social teaching that demand the fullest accountability on the part of Catholics.” In a break from prior Vatican documents, the letter also adopted the sanitized “pro-choice” euphemism for abortion support.

Former Philadelphia Archbishop Charles Chaput has argued that it “give[s] scandal” for pro-abortion politicians to receive Communion by “creating the impression that the moral laws of the Church are optional […] Reception of Communion is not a right but a gift and privilege; and on the subject of ‘rights,’ the believing community has a priority right to the integrity of its belief and practice.”

Despite these longstanding principles, Communion for many pro-abortion politicians, such as Pelosi and President Joe Biden, has been allowed to continue in the United States. Most prominently, D.C. Archbishop Cardinal Wilton Gregory said he wouldn’t refuse Communion to Biden.

Throughout her career, Pelosi’s purported Catholic faith has never appeared to even soften her support for abortion-on-demand, from her efforts to increase federal funding for abortion groups to her opposition to protecting newborns after failed abortions.