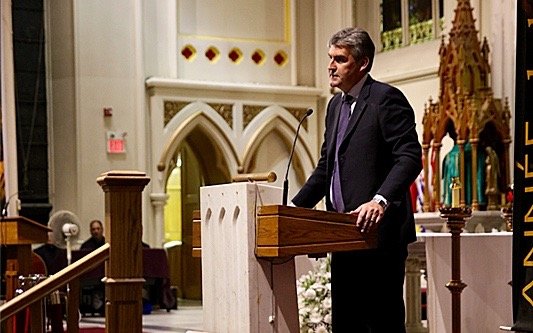 Nova Scotia Premier Stephen McNeil greeted from the pulpit the 600 or so women attending the convention, telling them that their “voice is important in our national conversations” on social justice issues. His comments as well as a photo of him addresses the women from the pulpit was captured by Salt and Light Media.

The mass was presided over by Archbishop Anthony Mancini of Halifax.

While McNeil was rated as a pro-life politician in the late 1990s, he has since “evolved” on the matter, according to Liberal insiders. During his September 2013 campaign that landed him in the premier’s office McNeil himself made it clear where he stands, tweeting: “I support a woman's right to choose. A Liberal government would continue to protect that right in our province.”

I support a woman's right to choose. A Liberal government would continue to protect that right in our province.

In 2014 McNeil tweeted support for the Halifax Pride Parade, saying he was looking forward to attending the event.

McNeil urged CWL members to “make sure we are focused on the issues we should be focussed on,” reported Salt and Light.

This is not the first time that the Halifax-Yarmouth Archdiocese has given a platform to McNeil, despite his anti-life-and-family positions. In 2014 the politician gave the keynote speech at the Archdiocese’s annual Archbishop’s Dinner where he ironically spoke to Catholics about the values of “faith and family.”

Ellen Chesal, executive director of Campaign Life Coalition Nova Scotia, called it “schizophrenic” for Catholic leaders to give a platform to a pro-abortion politician at a Catholic event held in a Catholic church.

“It’s appalling. It just blows my mind,” she told LifeSiteNews.

The Catholic Church holds that human life is sacred, calling abortion an “evil” that is “gravely contrary to the moral law.” The Church also holds that homosexual acts are “intrinsically disordered” and that “under no circumstances can they be approved.”

The CWL itself has been a mixed bag when it comes to abortion. In 2000, the organization was widely criticized by pro-lifers for lending its support to the “World March of Women 2000,” an event that, among other things, championed abortion as a “right” for women as well as pushed for the acceptance of homosexuality.

Chesal said that as a former member of CWL, she remembers encountering a number of women in leadership roles who were “sympathetic” to abortion.

“They weren’t frowning on abortion,” she said.

The CWL's official position states that “human life at all its stages deserves legal protection.”

LifeSiteNews contacted the CWL by email and phone, asking how it was that a pro-abortion politician was given a platform at an event of Catholic women who strive to live their lives according to the Catholic faith, but did not receive a response by press time.

LifeSiteNews also contacted the Archdiocese of Halifax-Yarmouth by phone for comment, but did not receive a response by press time.

The CWL’s 96th annual national convention was held at the Halifax World Trade and Convention Centre August 14-17. The theme for this year’s meeting was 'One Heart, One Voice, One Mission – Hospice and Palliative Care.'

Halifax archdiocese to host pro-abort Catholic premier for keynote on ‘faith and family’
Nova Scotia Liberal Premier: We tolerate pro-lifers in our party