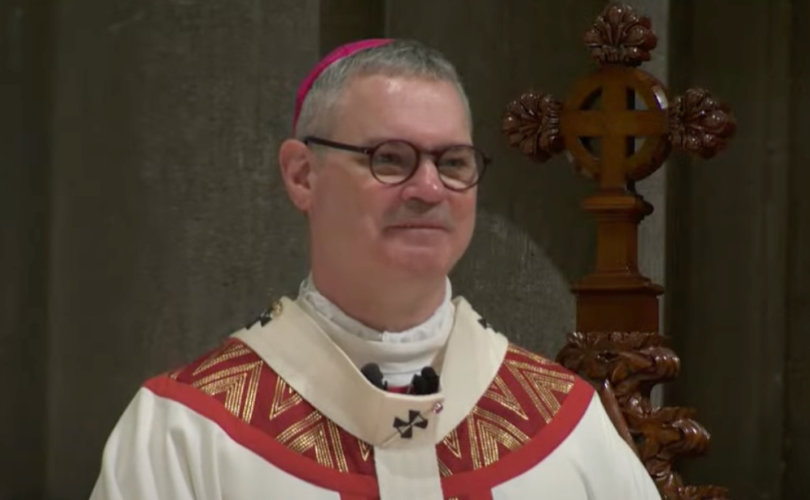 “What has become for us the Body and Blood of Our Lord is received by Catholics — those in communion with the Catholic Church — in Holy Communion,” announced Archbishop Comensoli before the distribution of Holy Communion. “So for those here present in the cathedral, who are Catholics and come forward in good faith to receive the Lord, I invite you to do so at four places.”

The archbishop took the time to highlight the cathedral’s “hand sanitizing stations [which are] available as you come forward for the sanitizing of your hands as you receive Holy Communion.”

Andrews was among the first of the 500 mourners to receive Holy Communion from Utri, as Archbishop Comensoli stood on the other side of the coffin also distributing Communion.

While Comensoli invited Catholics who deemed themselves “in good faith” to come forward to receive Holy Communion, Andrews has previously even rejected any claim to such a title, saying that he rarely attends church.

Catholic doctrine teaches that the grave sin of abortion is always wrong because it kills an innocent human being, thus violating the Church’s prohibition on murder, a teaching that “remains unchangeable.”

The Church’s Canon Law (can. 915) further stipulates that under no circumstances are those who persist in manifest grave sin to receive the Holy Eucharist: “Those who have been excommunicated or interdicted after the imposition or declaration of the penalty and others obstinately persevering in manifest grave sin are not to be admitted to holy communion.”

LifeSiteNews contacted the Archdiocese of Melbourne and St. Patrick’s Cathedral for comment but did not hear back at time of publishing.

Head of the Labor party in Victoria and premier there since 2014, Andrews has been described as “Australia’s most shameless Christophobe,” due to his promotion of laws and ideologies contrary to the teaching of the Catholic Church.

Under Andrews’ premiership, Victoria’s new Change or Suppression (Conversion) Practices Prohibition bill makes it illegal to try to change or suppress a person’s sexual orientation or gender identity in Victoria, including a prohibition on “harmful practices” such as prayers or “an exorcism.”

The Australian Christian Lobby (ACL) described the Change or Suppression bill as “the most draconian legislation of its kind in the entire world.”

ACL has compiled an extensive summary of Andrews’ policies which violate the Catholic Church’s teaching on life and the family, including pioneering the legalization of euthanasia and adoption of children by same-sex pairs.

His political career has been notably marked by consistent promotion of LGBT ideologies, having gained early notoriety by being the first premier in the country to attend a “pride” march in 2015, shortly after having been elected Premier.

ACL noted that Andrews voted against numerous amendments in the abortion up to birth bill, including those which would give pain relief to a baby who could feel pain while being dismembered during the abortion, and an amendment “banning partial birth abortion.”

Since the start of the COVID-era, Andrews has imposed some of the most radical restrictions of freedoms anywhere in the world, including daily curfews and mandatory mask wearing in public.

He recently presented two bills to Parliament which, if passed, would grant his government the authority to impose $90,000 fines on individuals and $455,000 for businesses who “intentionally and recklessly” violate public health orders. Additionally, law enforcement will be given the authority to imprison Australians who fail to comply with public health orders for up to two years.