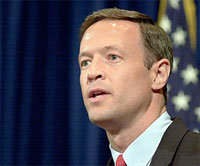 “In or out of the presidential campaign season, there is no good outcome to a Catholic institution providing a coveted campaign platform to a dissident Catholic who wants nothing more than to win an election,” Reilly said. “Loras College ought to be capable of providing a far better education for its students than a guest lecture by Martin O’Malley, with no effort to ensure that the truths of Catholic teaching are presented and defended.”

O’Malley, the former governor of Maryland who was raised Catholic but supports abortion and same-sex marriage, was specifically asked about his backing of Planned Parenthood by a member of the crowd, according to a report in the Telegraph Herald.

“You said that you grew up learning Catholic social teaching and support the dignity of every human person … How can you support Planned Parenthood when they’re the biggest abortion provider and murderers of numerous human children?” O’Malley was asked.

The presidential candidate reportedly responded that there are “very few public issues that I’ve wrestled with as much as this one given my beliefs and given my faith.” The Telegraph Herald said O’Malley went on to defend Planned Parenthood as a provider of preventative health, and called abortion a choice best left to the “individual conscience” of women.

During the event, O’Malley acknowledged “I’m mindful that I’m at a Catholic institution,” and said, “If there is a thread that runs through my public service, it is a thread that’s very firmly grounded in Catholic social teaching.”

A Loras College official told the Newman Society that O’Malley was invited to speak by the Loras College Democrats, an officially recognized student group on campus.

The Telegraph Herald quoted event attendee Sister Dorothy Schwendinger of the Sisters of St. Francis in Iowa as saying: “I think he’s thought through these questions very carefully … His major answer to that [abortion] question is Catholics can believe and act out of their faith, but we cannot impose our faith on other people.”

But O’Malley does not talk about personally believing in the teachings of the Church on abortion when speaking about imposing those teachings on others. In 2002 O’Malley confirmed that he is personally “pro-choice” and believes “abortions should be safe, legal and rare,” according to an aide. And when asked earlier this year by CNN’s Jake Tapper about his support for abortion as a Catholic, O’Malley again stated, “I am pro-choice.”

In April 2014, then-Governor O’Malley was honored by Planned Parenthood of Maryland at their annual spring gala with the “Betty Tyler Award” given to “trailblazers for women’s health and reproductive justice in Maryland.” During the event, O’Malley said his administration’s close partnership with Planned Parenthood of Maryland made it “the best state in America for women.” He also received a 100 percent rating as Maryland’s governor from the pro-abortion group NARAL Pro-Choice America.

In their 2004  document  Catholics in Political Life, the U.S. bishops made clear, “Failing to protect the lives of innocent and defenseless members of the human race is to sin against justice. Those who formulate law therefore have an obligation in conscience to work toward correcting morally defective laws, lest they be guilty of cooperating in evil and in sinning against the common good.”

The bishops continued: “Catholics who bring their moral convictions into public life do not threaten democracy or pluralism but enrich them and the nation. The separation of church and state does not require division between belief and public action, between moral principles and political choices, but protects the right of believers and religious groups to practice their faith and act on their values in public life.”

The same document also prohibits Catholic institutions from honoring those “who act in defiance of our fundamental moral principles” with “awards, honors or platforms which would suggest support for their actions.”

Additionally,  Ex corde Ecclesiae, the apostolic constitution governing Catholic universities issued by Saint Pope John Paull II, states that “Catholic teaching and discipline are to influence all university activities … Any official action or commitment of the University is to be in accord with its Catholic identity.”

In its official statement to the Newman Society, the College cited Ex corde Ecclesiae in its justification for allowing O’Malley to speak on campus.

“[W]e fully embrace and embody the tenents [sic] of Ex corde Ecclesiae. The college strives to be a community demonstrating the highest standards of the Catholic intellectual tradition and welcoming all people into a dialogue to promote core values of truth, respect, responsibility, excellence and service,” read the statement provided to the Newman Society by Sue Hafkemeyer, director of communications and marketing at Loras College.

We promote an open atmosphere of critical inquiry and academic conversation that includes varied voices, past and present, across Catholic and other traditions. The Catholic intellectual tradition upholds the impartial search for truth. We encourage the ongoing conversation between faith and reason based on the confident hope that there is in human life a truth founded on reality. We endorse academic freedom, which makes open discussion and inquiry about truth possible.

But in Ex corde Ecclesiae, academic freedom is defined to protect the work of professors “within the confines of the truth and the common good” — which does not include abortion. And despite the College’s claim, nowhere does the document call for a variety of campus speakers who may contradict moral truths without correction from Catholic faculty or college leaders.

The College said that during the political campaign season it is “standard practice” to “permit all major political candidates to appear on campus if they are invited by student organizations.”

“A candidate’s appearance in no way constitutes an endorsement by the College of that candidate or their views,” the College stated. “We clearly state our Catholic values and have clear guidelines which communicate we do not endorse any visiting candidate.”

The College went on to state: “To the extent that we afford our students access to thoughts beyond our values is the extent to which they are better prepared to do precisely what the church requests of all of us. Buffering them from the realities of the world fails in fully educating them and does not heed the very clear directives given by Popes John Paul II, Benedict XVI and Francis, in addition to those who led before them.”

The statement ended with another reference to Ex corde Ecclesiae, quoting paragraph 43 about Catholic universities being “ready to dialogue with and learn from any culture.”

In response to the College’s statement, the Newman Society asked if the explanation given to justify O’Malley’s address on campus would apply to all pro-abortion public speakers.

The College said that was not the case, and that the statement provided to the Newman Society exclusively dealt with political candidates running for office “based within the larger framework of our history, Ex corde Ecclesiae, first in the nation caucus status” and the College's motto Pro Deo et Patria (For God and Country).

The Newman Society also asked what public steps were taken to show that the College doesn’t approve of O’Malley’s views, such as a representative of the College publicly refuting O’Malley’s comments, as internal guidelines and positions may not be known to the public.

“These are student organization hosted events, therefore our students are the ones who spoke to and questioned the issues that arose, creating a real life learning opportunity for them,” the College responded.

“While any of our professional staff could have addressed the candidate, the true purpose of this event was a student forum for political education,” the statement continued. “The fact that they responded by addressing this candidate’s opposing views is a true testament to their ability to engage in civil discourse.”

The College added: “Catholic values permeate the college campus every day. As witnessed by all at the event, we are very proud that our students used this opportunity to share their deep Catholic values and their ability to use critical inquiry to address these issues.”

But the Newman Society’s Reilly found the College’s response lacking. “It’s the job of the administration, faculty and staff to uphold a college’s Catholic identity, not the students. If a Catholic college can’t stand firm in defense of human life and dignity, how can it honestly claim to embrace the ‘impartial search for truth’? The students who attended the O’Malley campaign event were given only falsehood.”