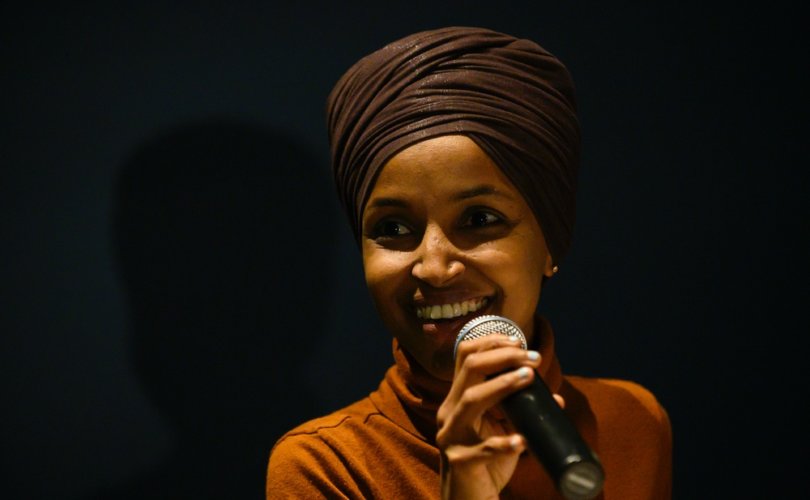 The video was from a “multi-faith” gathering in January 2019 that was organized by the U.S. House of Representatives.

In the video, pro-abortion, pro-LGBT Muslim Rep. Omar read a Muslim prayer as a priest, members of Congress, and others listened.

“There is a…prayer in Islam that says, ‘Allah, put courage into my heart, and take away all that might hinder me in serving you,’” she said. “‘Free my tongue to proclaim your goodness, that all [may] understand me.’”

Despite her Muslim faith, Rep. Omar has denounced pro-lifers as “religious fundamentalists” and supports same-sex “marriage” and the LGBT cause. She is part of a group of leftist Democrat females in Congress which has been dubbed “The Squad.”

She is known for being hyper-critical of President Donald Trump and mocking Americans for saying “Al Qaeda” in a fearful way. She has made anti-semitic remarks that were condemned by her party’s leadership. And at a Council on American-Islamic Relations (CAIR) event, Omar also famously said, “CAIR was founded after 9/11 because they recognized that some people did something and that all of us were starting to lose access to our civil liberties.”

At St. Peter’s on Capitol Hill, Omar continued, “Give me friends to advise and help me, that by working together our efforts may bear abundant fruit.”

She added: “And, above all, let me constantly remember that my actions are worthless unless they are guided by your hand.”

“Allah, may everything that I do start well and finish well. Sustain me with your power. And in your power, let me drive away [all falsehood, ensuring that truth may always triumph].”

Rep. Omar, who was born in Somalia, wrote in her Thanksgiving tweet, “Alhamdulillah [praise to Allah] for the opportunity to serve my constituents, to care for my children, and have a wonderful love in my life. This is a prayer a read [sic] on the start of Congress and feel grounded in its blessings.”

Alhamdullilah for the opportunity to serve my constituents, to care for my children and have a wonderful love in my life.

This is a prayer a read on the start of Congress and feel grounded in its blessings.

Thank you all for standing with me and for our progressive movement! pic.twitter.com/Npzemjz00Q

“Thank you all for standing with me and for our progressive movement!” she added.

Among the notable Democrats who participated in the event at St. Peter’s were House Speaker Rep. Nancy Pelosi and Rep. Donna Shalala, both of whom are nominally Catholic but support abortion on demand and homosexuality. The president of the Islamic Society of North America, Azhar Azeez, tweeted about his attendance at the event on January 4.

Parish was ‘happy to host this prayer service’

“St. Peter's is happy to host this prayer service where God’s blessing is beseeched for the important work of our Congress,” Patrick A. Devenney, business manager of St. Peter’s, told LifeSiteNews in an emailed statement. He said St. Peter’s is the “traditional” site of “the bi-annual prayer gathering” and acknowledged that Rep. Omar “delivered a prayer during the service”:

In January 2019, St. Peter’s Catholic Church on Capitol Hill in Washington, D.C. provided the venue for the opening prayer service for the House of Representatives of the 116th Congress.  As one of the larger sacred spaces on the Hill, and in such close proximity to the U.S. Capitol, St. Peter’s has been a traditional site for the bi-annual prayer gathering.  The Blessed Sacrament is relocated outside of the church during this interfaith prayer service, which is sponsored by the Chaplain’s Office of the House of Representatives, and all House Members, staffers and guests are welcome and encouraged to attend.  As a member of Congress, Rep. Ilhan Omar, along with other Members and clerics of other faiths, delivered a prayer during the service.  St. Peter's is happy to host this prayer service where God’s blessing is beseeched for the important work of our Congress.

Rev. Gary Studniewski is the pastor of St. Peter’s. Cardinal Donald Wuerl, whose resignation Pope Francis accepted in October 2018, was still the administrator of the Archdiocese of Washington at the time of the event. The archdiocese sent LifeSiteNews the same statement as Devenney did.

Encouraging ‘the error of religious indifference’

A prominent theologian who spoke to LifeSiteNews under the condition of anonymity said it is “never lawful to practice a false religion; so anything that can rightly be described as an ‘Islamic prayer,’ that is, a prayer intended to promote the teachings of the Koran and the vision of the relations between God and man included in that book, is never lawful.”

He noted that to do so in a church and in the presence of a priest and Catholics “makes it worse” because it “encourages them in the error of religious indifference, i.e. the view that all religions please God and lead to heaven. It is even worse when [done] by someone enjoying political power, since the examples of the powerful are always more efficacious.”

He noted Canon 1210 of the Catholic Church’s Code of Canon Law: “Only those things which serve the exercise or promotion of worship, piety, or religion are permitted in a sacred place; anything not consonant with the holiness of the place is forbidden.”

The theologian concluded: “So the bishop not only can but should forbid non-Catholic religions to be exercised in his church. Ultimately, this duty rests not on canon law, but on divine law, which this canon simply enshrines.”