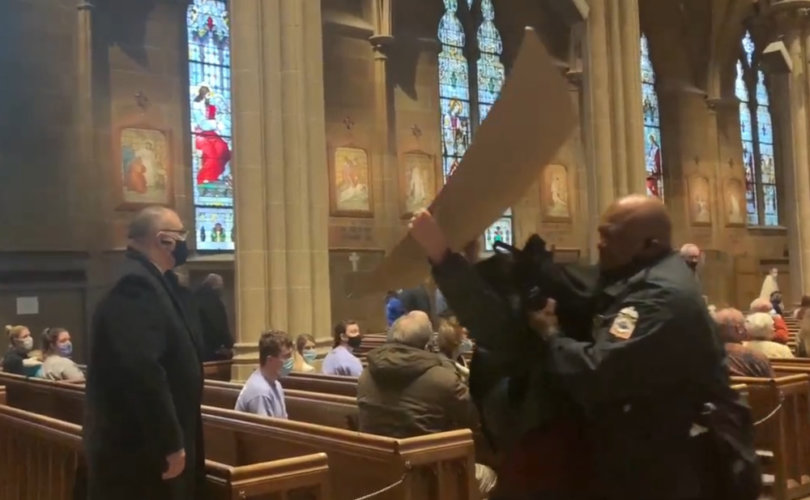 During the diocesan annual Respect Life Mass, held on the anniversary of Roe v. Wade and presided over by local ordinary Bishop Robert Brennan at St. Joseph Cathedral, eight activists interrupted the bishop’s homily as they rushed into the cathedral and then paraded around the pews before reaching the altar, displaying posters with messages that read: “Fund abortion, not cops,” and “Abortion on demand, end Hyde now.”

The mostly female group inside St. Joseph’s Cathedral chanted, “Two, four, six, eight, this Church teaches hate,” as they marched around the church before being confronted by police and diocesan staff members, who were trying to escort the protestors out. Even after the pro-abortion group had been successfully ushered outside the cathedral, some of the activists could still be heard inside screaming insults at the congregation, including “Jesus hates you,” and “If hell is real, you can burn in it.”

Some of the approximately 200 Mass-goers were visibly shaken and disturbed by the actions of the activists. A number of children were in attendance and some were seen crying. Hundreds of Catholic school students throughout the diocese were watching a livestream of the Mass when the protesters interrupted Brennan’s homily.

Although no arrests were made at the time, of the eight-member group, four had charges filed against them on February 18. Jordyn Close and Mason Hickman, both 24, along with Michelle Davis, 39, have been charged with criminal trespass and disorderly behavior. They will face pre-trial hearings in March and April. The fourth defendant, Anne Morrice, 35, also faces a more serious misdemeanour charge of criminal damage, in addition to the charges filed against her associates. Morrice is to be brought before the court on March 19.

Police complaints detail the defendants as “making unreasonable noise and … grossly abusive language” as well as failing to follow the commands of officers to leave the cathedral premises.

Meredith Tucker, a spokeswoman for the Columbus City Attorney's Office, remarked on the fact that charges had been filed against half of the group responsible for the demonstration. “As with every incident, evidence must be collected and reviewed for each defendant. After evaluating the available evidence, including surveillance videos, witness statements, and more — these were the four defendants we had sufficient evidence to move forward with charges,” a report in The Columbus Dispatch said.

Brennan subsequently released a statement thanking “the action by the Columbus City Attorney’s Office to cite those individuals who interrupted the Respect Life Mass,” noting the “rapid response” of the Columbus Police Department which launched an investigation into the events.

He also extended praise “for the proactive concern shown by our city’s leaders in supporting people of faith and their right to worship in peace and free of disruption.”

Mike Gonidakis, president of Ohio Right to Life, pointed out in a statement that “Even our pro-choice city attorney recognized that the rule of law must always apply, and our churches are sacred institutions.”

Continuing, he said, “Menacing others and yelling vulgarities at a church service at which young children were present is both unlawful and unconscionable … Such displays of irreverence towards women and children practicing their faith is tragic and uncalled for.”

Pro-abortion organizations have come to the defense of those charged, such as the Ohio Religious Coalition for Reproductive Choice (Ohio RCRC), which called the actions a “brief peaceful protest” and campaigned to have the diocese and the police department drop the charges. The Ohio RCRC purport to increase “the moral power of faith communities” in advocating for abortion, even offering a “Clergy for Choice” network for pro-abortion ministers to connect. A brief scan through their membership list reveals the vast majority belong to Christian churches.

At the time of the incident, Cleveland Bishop Edward Malesic, who was present at a pro-life rally outside the Ohio Statehouse, just a few blocks from the cathedral the same day, defended the basic biology of human life and the subsequent right to life that arises therefrom.