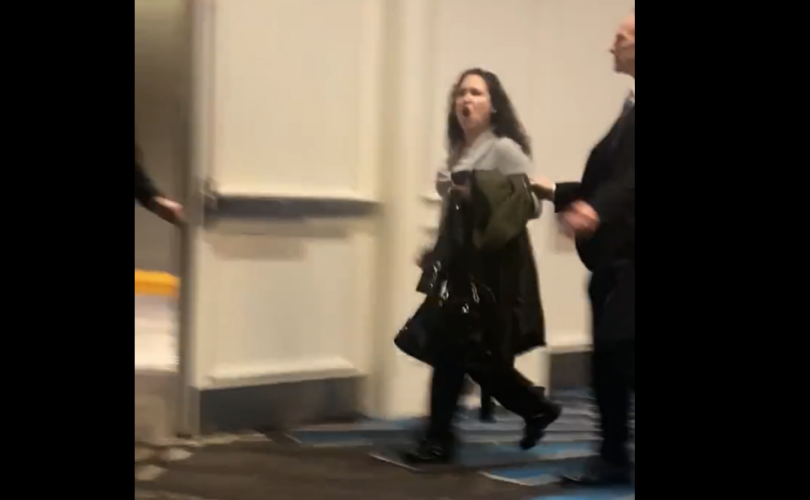 A protester is escorted out of the Capitol Hill Pregnancy Center's annual banquet in Washington, D.C.Twitter

(LifeSiteNews) — The annual banquet for a pro-life pregnancy center in Washington, D.C. was interrupted multiple times by pro-abortion protesters on Thursday night.

Capitol Hill Pregnancy Center hosted its annual banquet at the Crystal City Gateway Marriot on December 1, which was disrupted at least seven times by seven different protesters who attended the event and one by one stood up to shout four-letter words and condemnations during the executive director’s speech.

The first protester condemned pro-life legislation as denying women rightful “health care” by shouting, “that is all blood on your f***ing hands, every last mother f***ing one of you a**holes.”

As she is being escorted out of the event, the woman can be heard saying, “Jane says revenge mother f***er” and “blood on your hands.” The protester’s full message cannot entirely be made out due to someone else singing “God Bless America,” presumably to drown out her words.

Immediately after the initial disruption, a second woman stood from the same table and screamed that “women aren’t getting the health care they need. Abortion forever.” A third protester leapt from his chair before the second had exited the room and declared that “Capitol Hill Pregnancy Center is a fake clinic … who misleads [and] who lies.”

As he was promptly removed from the room, he shouted, “Shame on you.”

Another video of the incident shows two more women beginning to shout pro-abortion rhetoric, but their messages are quickly interrupted by police, who usher them out of the room. Soon after their exit, a sixth protester who was standing behind the tables of guests and appearing to be filming on his phone called out, “This clinic has blood on its hands, we know that you have blood on your hands.” While police pushed him out of the event, he added, “You don’t give a f*** about pregnant people.”

When the room finally settled, the last protester walked through the tables shouting, “You’re killing women, you’re killing children; you don’t give a s***.”

Meanwhile, outside the venue, additional protesters from the pro-abortion groups OurRightsDC and ShutDownDC chanted, “We won’t give up this fight, abortion is a human right” and “thank God for abortion.” Signs and light projections pictured various false messages, including “forced birth is fascism,” “respect existence or expect resistance” and “Beware! Toxic political poison.” One sign even claimed that “Jesus [loves, expressed with a heart image] abortions.”

LifeSite contacted Capitol Hill Pregnancy Center for comment but had not yet received a response.

Despite the loud presence of the protesters, pro-lifers condemned the antagonistic messages and praised the pregnancy resource center for its work.

“This is gross,” posted conservative think tank The Heritage Foundation. “The fact is crisis pregnancy centers help women and save lives. From 2016-2021, centers like the Capitol Hill Crisis Pregnancy Center served almost 2 million people and saved an estimated 828k lives.”

This is gross. The fact is crisis pregnancy centers help women and save lives.

Carolina Lumetta, a reporter for the Christian publication WORLD magazine, drew attention to the witness of a mother who had been helped by the pro-life clinic.

“The protesters shared a table with a young mom and her toddler,” Lumetta posted on Twitter. “After wiping some tears, the mom went to the podium and gave a testimony about how the pregnancy center helped her keep her baby.”

The protesters shared a table with a young mom and her toddler. After wiping some tears, the mom went to the podium and gave a testimony about how the pregnancy center helped her keep her baby.

Daily Signal reporter Mary Margaret Olohan also noted that the incident was “particularly wild since Capitol Hill Crisis Pregnancy Center is so darn close to SCOTUS (4 minutes driving) where protesting took place for months. You’d think authorities would take extra precautions in light of the scores of attacks on pro-life centers since the Roe leak.”

Particularly wild since Capitol Hill Crisis Pregnancy Center is so darn close to SCOTUS (4 min driving) where protesting took place for months. You’d think authorities would take extra precautions in light of the scores of attacks on pro-life centers since the Roe leak. pic.twitter.com/nNMaHQ7B6X

“Perhaps @DCPoliceDept should be looking more closely at @OurRightsDC and @ShutDownDC considering their obvious and stated animosity towards crisis pregnancy centers,” Olohan added.

Perhaps @DCPoliceDept should be looking more closely at @OurRightsDC and @ShutDown_DC considering their obvious and stated animosity towards crisis pregnancy centers and towards pro-life figures like Erin Hawley.

Last night was not the first time that Capitol Hill Pregnancy Center was targeted by abortion advocates. In early June, roughly one month after the leaked draft of the Supreme Court’s opinion regarding the Dobbs case, activists vandalized the clinic with red paint and the words “Jane Says Revenge.” Although unconfirmed in this incident, many similar attacks were claimed to be the work of pro-abortion extremist group Jane’s Revenge.

However, the FBI has not yet made any arrests in connection with the group’s attack or other acts of violence against pro-life pregnancy centers. A federal law enforcement investigation began in late June, after Roe v. Wade was historically overturned. In October, the FBI refused to disclose whether the agency had made any arrests despite the ongoing investigation.

House Republicans demand answers from Dept. Of Justice on FBI’s use of foce in Mark Houck arrest