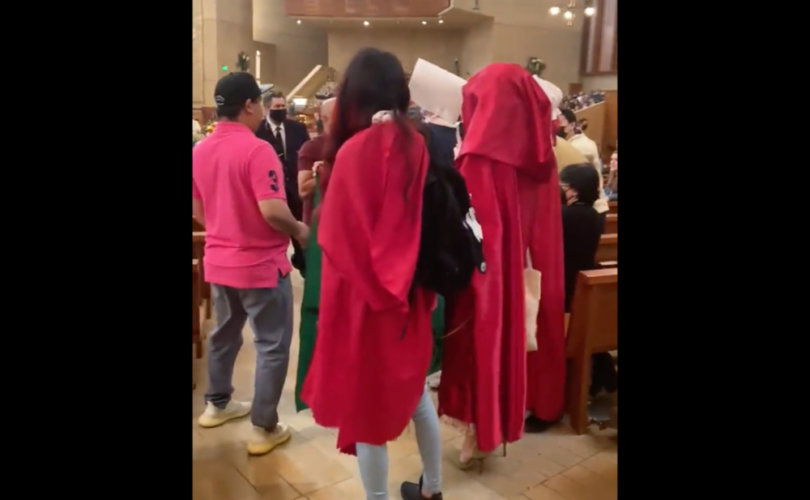 LOS ANGELES (LifeSiteNews) — Pro-abortion activists were escorted out of the Cathedral of Our Lady of the Angels in Los Angeles after they attempted to disrupt a Sunday Mass that was taking place in the cathedral.

The incident took place shortly before the distribution of Holy Communion during a 10 a.m. Mass at the L.A cathedral and is only days after a radical pro-abortion group known as Ruth Sent Us, encouraged people to storm Catholic parishes throughout the U.S. starting on Sunday, May 8 – which is Mother’s Day in the U.S.

Videos of the cathderal invasion emerged on Twitter showing a group of four women dressed in bonnets and red-hooded gowns.

As the women were making their way towards the altar, they were immediately confronted by parishioners and security staff, who, after a short verbal confrontation, managed to escort them outside of the cathedral.

Pro abortion activists disrupt a Mass at the Cathedral of Our Lady of the Angels in LA. pic.twitter.com/XGiTHT7co0

Marxists try to disrupt Mass at Cathedral of our Lady of the Angels. Security, ushers and parishioners said they were not having it.#cathedral #Catholic pic.twitter.com/HlN8yHxPKL

Though as of Monday, Ruth Sent Us has not taken responsibility for the Los Angeles protest, the costumes worn by the women in the video have also been worn by members of the pro-abortion group on previous occasions, including another Sunday Mass disruption at the Cathedral of St. Mary of the Assumption in San Francisco back in February.

Videos of that previous incident were recently posted on Twitter and Tik Tok by the abortionist group as a way to promote their May 8 protest.  The protests are anticipated to last all week, from May 8 through 14.

“Whether you’re a ‘Catholic for Choice’, ex-Catholic, of other or no faith, recognize that six extremist Catholics set out to overturn Roe,” the group tweeted. “Stand at or in a local Catholic Church Sunday May 8.”

A video accompanying the tweet showed the activists standing in front of the sanctuary, brandishing pro-abortion signs and shouting anti-Catholic slogans.

“For 2,000 years the Catholic Church has been an institution for the enslavement of women!” one of the women is heard shouting.

In another video of the protest, the activists are heard demanding “abortion on demand and without apology,” claiming that “without this basic right, women can’t be free.”

The costumes worn by the pro-abortion activists are from the TV series The Handmaid’s Tale, based on the 1985 dystopian novel of the same name by Margaret Atwood.

According to CNA, they are meant to “symbolize enslaved women who are raped and forced to give birth.”

Ruth Sent Us’ Twitter page is full of anti-life and anti-Catholic rhetoric, and the group regularly calls for actions against Catholic churches.

These calls include threats of sacrilegious acts such as the burning of the Eucharist.

“Stuff your rosaries and your weaponized prayer…we’ll be burning the Eucharist to show our disgust for the abuse Catholic churches have condoned for centuries,” reads one tweet featuring a blasphemous depiction of Christ.

Stuff your rosaries and your weaponized prayer.

We will remain outraged after this weekend, so keep praying.

We’ll be burning the Eucharist to show our disgust for the abuse Catholic Churches have condoned for centuries. pic.twitter.com/1UxAkyuXTg

“Burning symbols in effigy is still allowed in America. The flag, the Eucharist, your photo. Cry some more,” reads another tweet.

According to CNA, a number of dioceses across the U.S. announced they were taking “extra precautions” following the group’s threats, and police in Washington D.C, and New York were on high alert this past Sunday.

“MPD is aware of potential disruptions associated with First Amendment demonstrations, MPD will be monitoring, assessing, and planning accordingly with our local and federal partners,” the Metropolitan Police Department in Washington, D.C., announced in a statement to The Daily Wire.

“We have increased available resources, including the activation of our Civil Disturbance Units, in preparation for these activities.”

On Friday, a pro-life law firm, the Thomas More Society, sent a letter to “Ruth Sent Us” saying its lawyers were ready to take legal action to defend the rights of religious believers to the free exercise of their religion as guaranteed by the United States Constitution and federal law.

Though the Los Angeles protest appears to be one of very few Mass disturbances in direct connection to the group’s call to action so far, other acts of anger and violence have also taken place throughout the U.S. in reaction to the potential overturning of Roe v Wade.

On Tuesday last week, a violent and vulgar protest by pro-abortion activists in Los Angeles resulted in at least one police officer being injured and parts of the city being vandalized with obscene graffiti.

The following day, a Catholic church in Boulder, Colorado, was vandalized with pro-abortion graffiti.

Threats were also made against the lives of the supreme court justices involved in last week’s leaked draft opinion.

One of them came from a verified Twitter user in the U.K., who suggested killing pro-life Justices Clarence Thomas and Samuel Alito in two separate tweets before removing them.

The group is planning a “walk by” in front of the justices’ homes this coming Wednesday.

“Our 6-3 extremist Supreme Court routinely issues rulings that hurt women, racial minorities, LGBTQ+ and immigrant rights. We must rise up to force accountability using a diversity of tactics,” a statement posted on the group’s website reads.

A map previously displayed below the statement used to show the locations of the six justices’ homes around Washington, D.C., with an announcement for an upcoming “walk by” before Google Maps removed it for violation of its terms of service.