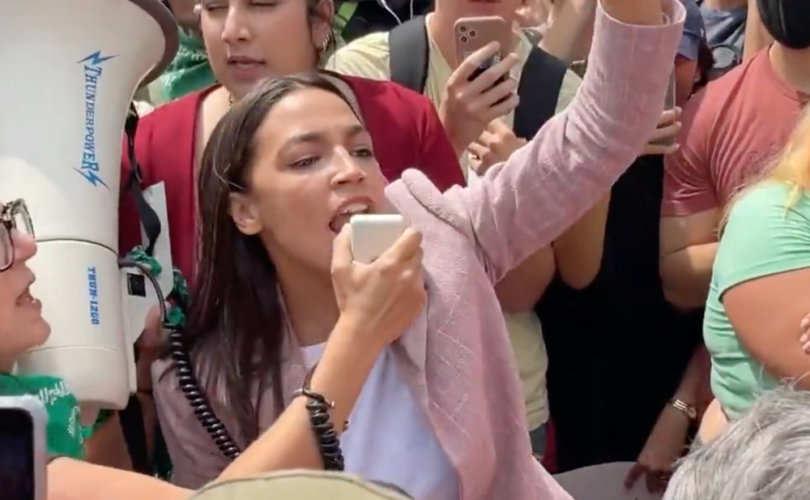 (LifeSiteNews) – Left-wing politicians and their supporters are expressing their outrage across America in response to the overturning of Roe v. Wade in the landmark Dobbs decision rendered on June 24.

MASHUP! Pro-abortionists take to TikTok to express outrage over the #RoeVWade decision with some even calling for mass protests pic.twitter.com/lRPT7yJ6zn

One dejected abortion protestor asked: “How have we not dismantled the government?”

Another woman who was crying and identified as LGBTQ said that “we’re next on the chopping block, and birth control.” In his concurring opinion, Justice Clarence Thomas intimated that prior rulings on contraception, same-sex unions, and sodomy ought to be revisited in light of the Dobbs decision. “For that reason, in future cases, we should reconsider all of this Court’s substantive due process precedents, including Griswold, Lawrence, and Obergefell,” Thomas wrote.

The prominently pro-abortion and pro-LGBT Congresswoman Alexandria Ocasio Cortez took to the streets in D.C., joining protestors in chanting that the decision was “illegitimate” and that people should get “into the streets.” She did not say if this was meant peacefully or not.

Meanwhile Congresswoman Maxine Waters said to a group of pro-abortion protestors, “to hell with the Supreme Court, we will defy them.” “Women are going to control their bodies no matter how they try and stop us,” she said.

🦀🦀🦀🦀🚨🚨🚨REP. MAXINE WATERS SAYS: “to hell with the Supreme Court, we will defy them!” pic.twitter.com/hRn4CPlW9s

Another group of pro-abortion supporters at the Supreme Court broke into a repeated chant of “we will aid and abet abortion.”

“Pro-abortion protesters chant “We will aid and abet abortion!” after Roe is overturned.” — via https://t.co/D6BCg1TV8Q pic.twitter.com/POYXqOtlLB

Yet another pro-abortionwoman, who was wearing a mask, rushed at Representative Marjorie Taylor Greene, and she had to be rushed away by her team as a result. The masked protestor was yelling “my body, my choice.”

Rep Marjorie Taylor Greene’s “team just had to rush her out of the protest. Press blocking the way, a woman screaming at her” — via https://t.co/2XxBzl3mLN pic.twitter.com/wOdyFX66cc