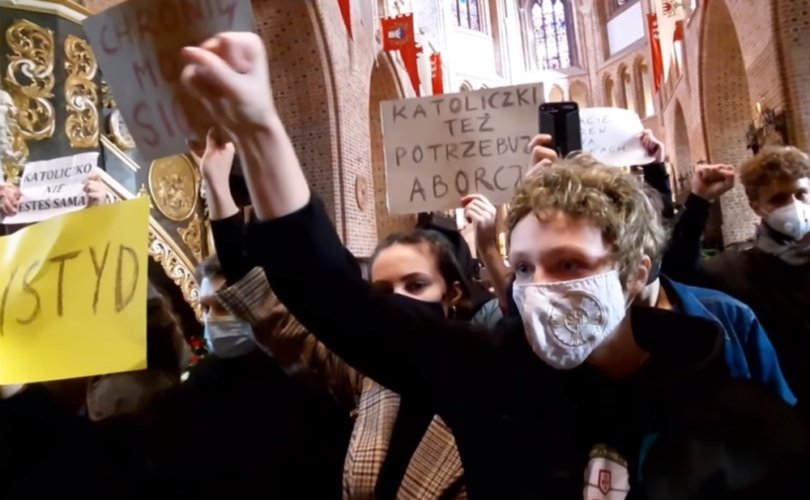 According to Polish political news website wPolityce, a priest in the northwestern town of Myślibórz was attacked earlier this week by a militant taking part in an illegal protest against last Thursday’s decision by the Polish court that eugenic abortion — the killing of unborn babies with disabilities — violates the nation’s constitution.

The crowd numbered about 150, whereas current coronavirus measures limit the size of groups outdoors to five.

The attack, which was recorded and then posted on Twitter yesterday, first involved the protestor hitting the pastor of St. John the Baptist church in the face and stomach. When both the pastor and other people in the crowd told the attacker he had been hitting a priest, the abortion supporter attacked him even more violently.

“But he’s a priest, calm down,” one of the onlookers says on the video.

“That he’s a priest makes it ideal,” said the attacker, who then chased the pastor into a gas station building and punched him repeatedly in the face and head.

Ewa Obarek of the local district prosecutor’s office in Szczecin told wPolityce that an investigation is taking place, and the news site indicated an arrest might soon take place.

On Tuesday, a young man was attacked by baton-wielding men in the town of Wołowin, about 12 miles east of Warsaw, after he attempted to protect a statue of Pope St. John Paul II.

According to Polish news website tvp.info, hundreds of pro-abortion demonstrators had gathered in the town center to shout anti-Catholic and anti-government slogans. Faithful Catholics, tipped off about the rally, created a human cordon around the statue so that it would not be destroyed.

According to the victim, who allowed photographs of his injuries to be published, but not his name, the Catholic defenders of the statue prayed the rosary while the pro-abortion demonstrators shouted obscene abuse at them. When the situation calmed, the men went to check and see if local church had been vandalized.

They went back to the statue, and then three men returned to the church, where they were attacked by masked people wearing black.

“A group of about five people ran up to us and shouted ‘defenders of the cross,’” the victim said. “They took out retractable batons and began to beat us.”

Two of the men were not injured, but the third was seriously wounded.

“I saw that blood was gushing horribly from my head, and I began to staunch it, and then I found myself in the ER,” the victim said.

When he was treated for injuries to his head and wrist, and subsequently released, he went to the police station to file a complaint, but discovering it was too late at night, he reported the crime at noon on Wednesday.

Other monuments to John Paul II have, in fact, been profaned. The hands of a statue of the Polish saint in the town of Kostancin-Jeziora, about 20 miles south of Warsaw, were painted red. In Poznań, protesters who failed to damage the historic cathedral settled for vandalizing the nearby monument to the sainted Pope instead.

Today, Krystian Kratiuk of Polonia Christiana told LifeSiteNews that the pro-abortion, anti-Catholic rallies are more concentrated in left-leaning towns and cities like Warsaw and Poznań. The rallies are explicitly militant in nature, featuring obscene chants and signs declaring, “This is war.”

The symbol of the pro-abortion protests is a lightning flash, something some of their critics have described as satanic. A large banner held by defenders of the Catholic cathedral in Białystock on Tuesday proclaimed, in Polish, “Jesus said to them, ‘I saw Satan falling from heaven like lightning.’”

Fr. Dariusz Oko of the Pope John Paul II University in Kraków has also commented on the connection.

Despite the coronavirus regulations, “official” pro-abortion “Women’s Strike” protests were permitted across Poland yesterday. In Krakow, female municipal employees were permitted by their employer to take part, and in Warsaw protestors gathered outside the offices of the pro-life Ordo Iuris Institute for Legal Culture.

Karolina Pawłowska of Ordo Iuris assured LifeSiteNews today via email that everyone there is “fine, although the situation is a little bit stressful.”

“But we hope it will soon be better,” she added.