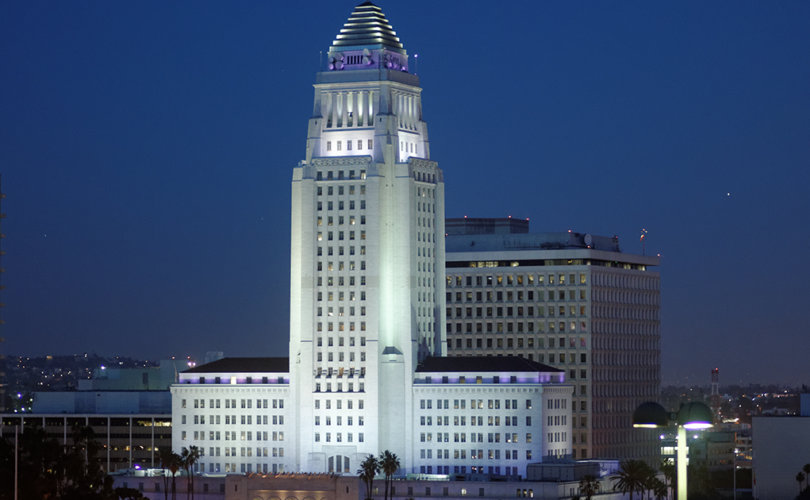 Be advised that some linked videos contain foul language.

LOS ANGELES (LifeSiteNews) — A violent and vulgar protest by pro-abortion activists on Tuesday in Los Angeles resulted in at least one police officer being injured. The protest came in the aftermath of the Monday U.S. Supreme Court Roe v. Wade draft opinion leak, which indicated the decades-old pro-abortion ruling will be overturned.

Video posted online shows scores of rabid pro-abortion activists, estimated to be well over 500 people, take to the streets after what began as a small protest of some 30 individuals, according to Fox News.

The protest began at the federal courthouse building. After a while, pro-abortion activists began to flood into the streets. This appears to have left both the Los Angeles Police Department (LAPD) and Department of Homeland Security Officers unprepared.

Shortly thereafter, as the protests moved from the courthouse to city streets, some activists began to throw projectiles at officers. This resulted in LAPD issuing a citywide tactical alert.

According to LAPD Chief Michel Moore, police “attempted to communicate, clear, and provide dispersal order to the group.”

Moore had posted on Twitter that they were trying to “facilitate” the group as they moved from the courthouse to city streets.

Moore in another tweet confirmed that one cop was injured after the crowd began to throw “rocks and bottles” at officers.

The protests had mostly died down before midnight, but not before some radicals vandalized city streets as well as the steps of Los Angeles City Hall with vulgar pro-abortion graffiti slogans.

It was also reported that some protesters tried to take over a city bus, and at times were surrounding police cars.

Video posted online shows some officers fighting back protesters with batons, and other videos show DHS officers trying to contain the situation.

On Twitter, Rick Stabile, who is a retired LAPD officer, wrote, “last night in LA antifa had some more ‘peaceful’ protest. I’m sure the media will cover the story this time.”

Tuesday’s pro-abortion protest in Los Angeles came about as a result of a leaked draft opinion from the U.S. Supreme Court that would use the Dobbs v. Jackson case regarding Mississippi’s restrictions on abortion at 15 weeks to reverse Roe v. Wade entirely.

On Tuesday, the U.S. Supreme Court confirmed the authenticity of the unprecedented leak but said it does not reflect the court’s final opinion.

Pro-lifers across the U.S. and indeed elsewhere have been rejoicing, albeit tentatively, the news that the court is looking to overturn Roe v. Wade.

However, the possible overturning of the pro-abortion ruling will no doubt fuel more protests, which will likely increase in the coming days and weeks.

Around the U.S. Supreme Court in Washington, D.C, large “non-scalable” fencing has been placed in anticipation of such protests.

On Monday, pro-abortion California Gov. Gavin Newsom said that he and his team are “proposing an amendment to enshrine the right to choose in the California constitution. We can’t trust SCOTUS to protect the right to abortion, so we’ll do it ourselves. Women will remain protected here.”