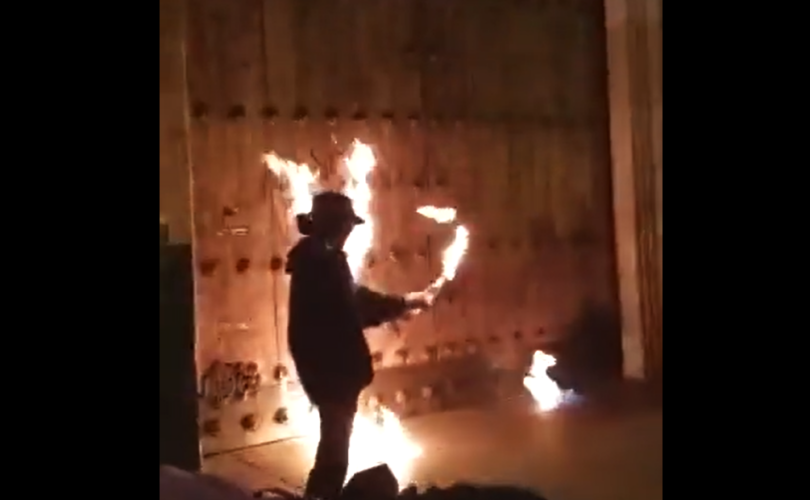 (LifeSiteNews) — Pro-abortion radicals in Colombia set the doors of the cathedral in Bogota on fire in a recent act of terrorism against pro-life values.

On the night of September 28, a group of masked pro-abortion radicals lit the doors of Bogota Cathedral ablaze. The act of terrorism against pro-lifers came as pro-abortion activists called for abortion to be made “safe and legal” in Colombia.

“We reject all forms of violence in actions and words,” the Archdiocese of Bogota said in a statement the next day. “We demand civility on the part of the promoters and participants of marches and protests, [and] we ask the authorities to guarantee the life, honor, and property of citizens.”

This act of terrorism, clearly seen in a video showing women pouring gasoline along the base of the cathedral doors before lighting them ablaze, came as a part of various demonstrations done for “International Safe Abortion Day.” Throughout the day, pro-abortion activists gave speeches where they demanded that the Colombian government make abortion “safe and legal” in Colombia.

The attack on the cathedral was carried out despite the fact that the Constitutional Court already legalized abortion up to 24 weeks of pregnancy in February, making Colombia the most “progressive” country in Latin American and the Caribbean in regard to abortion.

The attack also comes as pro-abortion violence against pro-lifers ramps up around the world, with churches and pro-life pregnancy centers finding themselves increasingly the victims of anti-pro-life violence.

The Catholic Solidarity Movement in Bogota called out the Mayor Claudia López and held her responsible for the lack of police presence during the incident. The Movement said the mayor “dismantled the reaction capacity of the police,” which in turn allowed the terrorists to freely attack the cathedral.

Lopez called out the incident on Twitter, blaming the police for not acting with greater speed to stop it from happening.

“This is vandalism,” she tweeted the next morning. “It has and deserves social and legal sanction. This video was sent to me by the commander of @PoliciaBogota Why, instead of recording, did they not apply the district protocol and the Law? I ask with respect, Do you have an order from your national command to let go and let go?”

Samuel Ángel, president of the Catholic Solidarity Movement, announced that the Movement will be filing a complaint against “these terrorists” in order that they might be held accountable “for the alleged crimes of damage to the property of others, rioting, damage to the public good, disrespect for beliefs, vandalism, terrorism, attempted murder, [and] conspiracy to commit a crime.”

Carlos Camargo Assis, the people’s ombudsman, has said that the attack on Bogota Cathedral is an attack on freedom of worship, a right that is guaranteed protection under the Constitution and Statuary Law 133.

“Freedom of expression or the right to peaceful public demonstration cannot be understood as letters of marque to attack the exercise of worship by citizens,” he said.

According to a statement by General Henry Sanabria, the director of the National Police, four women suspected of involvement in the incident have been taken into custody.