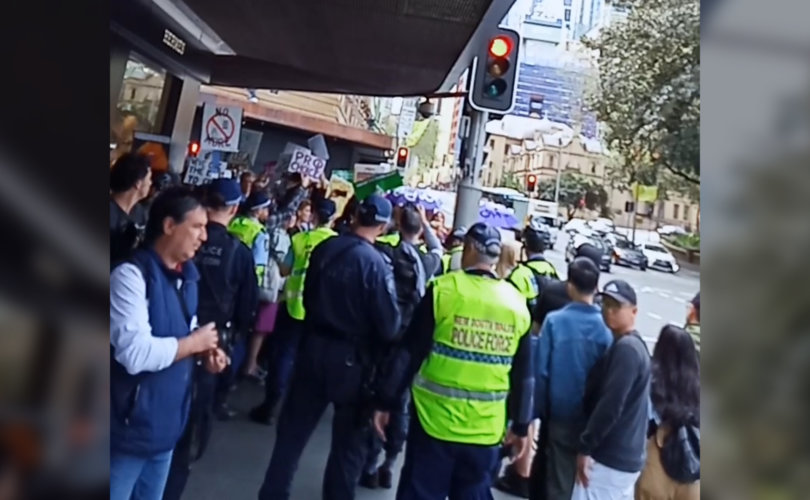 SYDNEY, Australia, September 20, 2019 (LifeSiteNews) – Abortion activists and allied media have denied and decried claims that supporters from a NSW (New South Wales) Pro-Choice Alliance rally in Sydney last Saturday have chanted “we will fight, we will win, throw the fetus in the bin.” LifeSiteNews has obtained original video files from the woman who filmed it and readers can decide for themselves what was chanted.

Sydney resident Roselyn Poole went into Sydney’s central business district on a whim that day and passed through Hyde Park where the pro-abortion rally was being held.  She told LifeSiteNews that taking some photos for herself she thought “Gee whiz.  They really do not have many people here. They’re always talking about how they are the majority.”  She added that the rally location is right in the city and very easy to get to on a Saturday.

Walking further, she spotted a couple of women she recognized from previous pro-life rallies and decided to join them as they moved to their counter-protest location across from Hyde Park, as designated by the police.

According to Poole, their troubles started when people leaving the pro-abortion rally up to an hour early abused them as they were walking past.  After the end of the rally, a much larger group came up and started arguing with them, followed by news cameras.

“They were clearly from the official rally” Poole said. “We have no doubt and the videos prove it.”

Supporters from both sides of the abortion debate have faced off in a loud and angry protest in the heart of the CBD. The confrontation sparked as pressure grows over the state's controversial abortion bill which returns to Parliament this week. @sarinanastasi #nswpol #7NEWS pic.twitter.com/eTuBvMXvCl

Poole’s reacted with shock to the chanting about putting fetuses in the bin.

“I was just like ‘oh my god’ that they would actually say that.  Who would say that?”  At the time she recorded video of it out of interest.

She added, “The irony of this is that we know they actually do that.  The abortionists put the fetuses in the bin.”

Australian media commentator Jane Caro also attacked reports of the pro-abortion protesters chanting to put the fetus in the bin.

Appalling misinformation & fake news around this incident. Why on earth would those of us who believe in a woman's right to choose chant such nasty nonsense? Most of us are mothers ourselves! Put bigots in the bin by all means, but fake news purveyors ought to join them there! https://t.co/lPcH2TJYlK

Poole commented: “Well she needs to be informed about that.  I used to like Jane.  I’d think “ah, she’s a nice person” even if I didn’t agree with the things she says.  She’s one of the people I like to listen to on the ABC radio and TV.  It’s a shame she’s so pro-abortion and vehemently defending it, plus the bill and the behavior of the pro-choicers.  I’m disappointed she’s been misinformed herself and needs to be properly informed if she is going to back these people up.”

In the eyes of Poole who was there in person and witnessed the event, whether the crowd chanted “fetus” or “bigot” doesn’t change the nature of their behavior.

For former Victorian MP and now CEO of Right to Life NSW Dr. Rachel Carling the behavior of the pro-abortion crowd was no surprise.  She told LifeSiteNews “In my time in the pro-life movement I have seen placards reading “the only good baby is a dead baby”, I have witnessed attacks during marches and I have been sent vicious hate mail – but I have never heard a crowd of pro-abortionists so proudly declare their true colors.”

A new bill proposes to decriminalize abortion in New South Wales. The bill proposes to legalize the killing of pre-born babies upon request up to 22 weeks gestation, while physicians would have to approve abortions at any time after that. The bill would remove abortion from the state’s Crimes Act and redefine it as a medical procedure that is regulated under other norms.

Former Australian premier Tony Abbott has denounced the bill as “infanticide on demand” and “animalistic.”