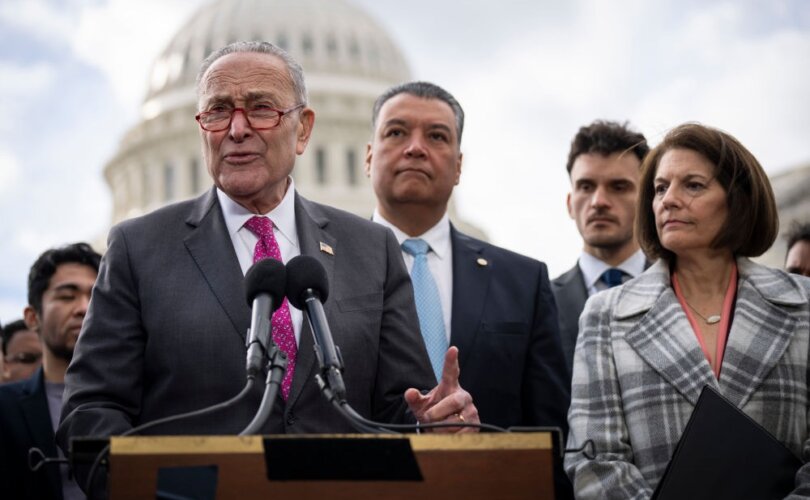 (LifeSiteNews) — Pro-abortion U.S. Senate Majority Leader Chuck Schumer, a Democrat, claimed mass immigration is vital for the survival of the U.S. because not enough Americans are having children. The remarks drew swift mockery from conservatives, who pointed out that Democrat policies on issues including abortion and same-sex “marriage” have been massive contributors to America’s declining birth rate.

“Now more than ever we’re short of workers, we have a population that is not reproducing on its own with the same level that it used to. The only way we’re going to have a great future in America is if we welcome and embrace immigrants,” Sen. Schumer said during a Wednesday press conference about the Delayed Action for Childhood Arrivals (DACA) program for people who were brought illegally to the U.S. as children.

He added that Democrat’s “ultimate goal” is to create “a path to citizenship for all 11 million or however many undocumented [illegal immigrants] there are here.”

BREAKING: Chuck Schumer calls for amnesty for all 11 million or more illegal immigrants in the US because we are short of workers and says the American population “is not reproducing on its own with the same level that it used to.” pic.twitter.com/TvKdNbr7TL

Conservative commentators were quick to point out that Schumer chose to focus on immigration while entirely skipping over the reasons why the American population’s birth rates have dropped off.

“They say that it’s empowering to stay single forever and never start a family, claim having kids destroys the environment, promote abortion as a moral good, and their solution when they realize people aren’t having enough kids is to import the third world to replace them,” tweeted Digital Strategist Greg Price.

In the opening monologue to his Thursday podcast, Catholic Daily Wire commentator Michael Knowles questioned whether “another solution to this problem, instead of importing millions of foreign nations each year in violation of the law and the will of the American people,” might “be perhaps instead to stop enforcing national policies that discourage Americans from having babies?”

“Schumer is saying that our nation, which just coincidentally subsidizes abortion, discourages marriage, celebrates sexual dysfunction, exalts contraception, forces women into the workplace, suppresses wages through mass migration, suppresses religion, and undermines the family, is apparently not having enough kids,” Knowles added. “Who’d have thunk it?”

Others noted that Schumer’s rhetoric appears to closely align with the so-called “great replacement theory” which leftist organizations and pundits have argued has been espoused by “racist” Republicans allegedly bent on excluding minorities from American life. Broadly, the theory suggests that Democrat politicians are intentionally encouraging widespread immigration to replace the existing American population.

Schumer’s comments have led some to opine that the “far-right” theory may actually be merely an observation of Democrats’ ongoing immigration policy.

On Thursday, the Daily Wire’s Ben Shapiro remarked that Schumer had “outlined the so-called ‘Great Replacement Theory’” in his statement, something that’s “fine when he says it” and “only wrong when you notice it.”

Chuck Schumer just outlined the so-called “Great Replacement Theory,” in which he advocated giving amnesty to 11 million immigrants to make up for America’s low birth rate. It’s fine when he says it. It’s only wrong when you notice it. pic.twitter.com/Z5rpTG9lbf

In addition to appearing to affirm the notion the “great replacement theory”, Schumer has opposed traditional marriage and family through legislation promoting unlimited abortion nationwide. He has also vocally supported transgenderism, promising to “stand with, fight for, and celebrate the transgender community.”

Most recently, Schumer voted in favor of the so-called “Respect for Marriage Act” to enshrine the controversial 2015 Obergefell v. Hodges Supreme Court decision radically redefining marriage. The legislation cleared the Senate in a vote of 62 to 37, with 12 Republicans signing their names to it.

Meanwhile, though the U.S. is not alone in experiencing a sharply declining birth rate, not all countries are seeing their growth dwindling. Late last year, Hungary recorded its highest birth rate in 27 years thanks in part to the pro-family priorities espoused by its conservative governance.