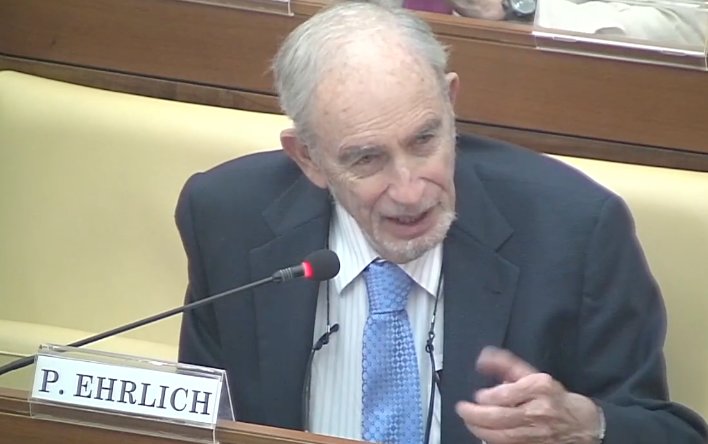 VATICAN, March 14, 2017 (LifeSiteNews) – The father of the population control movement, Paul Ehrlich, told a Vatican conference that he thinks Pope Francis is “the person in the world [who] has done more” than others to “initiate work” to fight climate change.

Ehrlich has made inflammatory statements about the hierarchy of the Catholic Church being a force of “evil.” He has compared human babies to garbage, called opposition to contraception a “dangerous trend” of religious “endarkenment,” and advocated for free contraception and abortions.

He has previously said Pope Francis is “dead wrong” for not promoting population control as a solution to environmental problems. Ehrlich also criticized Pope Francis' encyclical Laudato Si' for not endorsing population control. (A full list of the troubling things Ehrlich has said is available here. Other LifeSiteNews reporting on Ehrlich and his views can be read here and here.)

However, speaking at the Vatican on February 27, Ehrlich praised the current pontiff.

“I’m pleased to say that one of the best statements on the ethical issues [of environmentalism] came from Pope Francis. If I can quote from Laudato Si' … ‘Each year sees the disappearance of thousands of plant and animal species which we will never know, which our children will never see, because they have been lost forever. The great majority become extinct for reasons related to human activity. Because of us, thousands of species will no longer give glory to God by their very existence nor convey their message to us. We have no such right,’” said Ehrlich. “And I would say, ‘Amen.’”

Later in his talk, Ehrlich said, “We have been overusing the atmosphere as a sink for greenhouse gases. And there, I have to say, the person in the world has done more to initiate work to get it changed has been Pope Francis. It’s one of the biggest threats [that] humanity faces and I think his coming out on it was maybe the most important single thing that anybody has done so far to move in the right direction on climate change.”

The person who “has probably done more on the other side than any human being” is Rex Tillerson, America's new Secretary of State, Ehrlich said. This is because “when he was head of Exxon, he financed the entire program of lying about climate disruption that has been so successful in North America,” Ehrlich said.

“I think it is so incredibly important,” Ehrlich said of his “little commercial” plugging Pope Francis and criticizing Tillerson.

'We really need very fundamental changes in our attitudes, our ethics, our morals, how we run the world'

Ehrlich suggested that the planet's population growth needs to be stifled in order for it to thrive and in order for biodiversity to persist. He also suggested fundamentally changing “how we run the world” so that there can be more equity. Starting in middle school, children should be tasked with addressing these problems, he said.

“The biggest problem we face is continual expansion of the human enterprise,” he said. “I would love to see hundreds of trillions of human beings live over the next few million years rather than see if we can cram 11 billion in by … 2110, uh and then let the whole thing go down the drain. Sustainability is talked about a lot, but a lot of people talk about things like sustainable growth. Perpetual growth is the creed of the cancer cell, and we really have to look at the size of the human enterprise and think about why we’re doing these things.”

Because there “are parts of our natural capital that are not priced … individuals can get huge benefits without paying the social costs of what they’re doing,” Ehrlich said. The world's current “pricing system does not allow us to really properly consider – the way we run it at least – the externalities.”

And we all put those greenhouse gases into the atmosphere, and when you get a drought in Africa because of it, the African – poor Africans – are not paying for it. And I should say, I want to be very clear on one point … Actually, there’s this terrible feeling in the United States and many places that the problems of the world are the poor people. It’s those poor Africans that breed too much, uhh, they uh – they kill the bush meat … on and on, it’s somebody else – the big population and the big problems of the combination of population per capita consumption – it’s the aggregate consumption that ruins the environment. Of course, it’s the United States, Sweden, Switzerland, Italy, all those wonderful places, that have gotten the poor countries to pay the price. So if you think about what we have to do, what we among other things – we have to make sure that we get some equity in the world. That poor people get taken care of. You … think of poor people living in the slums of India or the slums of Africa – I live in one of the richest towns in the world: Palo Alto, California. And I carry bills in my pocket because there are people begging on the streets there. And somebody said it here I think already, but if you can’t even – maybe it was Peter – if you can’t take care of the people in your own society, when you live in a rich society, and so on, it tells us we really need very fundamental changes in our attitudes, our ethics, our morals, how we run the world.

Ehrlich finished on a “not cheery” note about “societal collapse.” He said people should consider “not just how you soften the collapse, and we hope by discussing that, we might even avoid the full collapse – but what do you do afterwards?”

“I hate to hear the term, you know we restore, or we rebuild,” said Ehrlich. “If you rebuild the kinda system we have today, all you’re doing is guaranteeing another collapse. In other words, the issue … to think about [is] how you design a world that is actually sustainable and has insurance built into it and sees to it that everybody is treated as properly as they possibly can be treated.”

“I think that’s a challenge for the kids,” he concluded. “I’d like to see everybody working on it starting in junior high school. How would you design, for instance, a money system for economics classes? As you all know, fractional reserve banking is how you generate your money and it absolutely requires growth. So how do you build a system that doesn’t have to grow forever?”

A pro-life population and demography expert, Steve Mosher of the Population Research Institute, told LifeSiteNews the Vatican shouldn't be surprised at what its invited speakers said at the conference.

“This is what you get if you invite secular humanists to speak at a Catholic conference,” said Mosher. “You get a secular humanist perspective, which is to say, if you think that human beings – men – are nothing but animals, then it’s perfectly alright to thin the herd on the pretense that there’s not enough in the way of resources to support the existing herd.”

Mosher blasted the Population Council's John Bongaarts for saying there is an “unmet need” for contraception during his talk at the Biological Extinction conference. He also criticized comments the Chancellor of the Pontifical Academy of Sciences and the Pontifical Academy of Social Sciences, Bishop Marcelo Sánchez Sorondo, made about procreation and fertility at the conference.

Sorondo said “we don’t know exactly” what the Church teaches on procreation and “education” will help women have one kid instead of seven.

“This is the Pontifical Academy of Science, and we worship someone who is the truth Himself,” Mosher told LifeSiteNews. “And so I think we have to be very careful to avoid being overly swayed by worldly views … we have to maintain a Trinitarian worldview. And it’s difficult in some of the sciences, because the sciences are dominated by people … who don’t believe in a creator. But nonetheless, if you’re going to come together to discuss these issues, you [have to] do it from a Trinitarian point of view” and the viewpoint “of true science,” not ideology or “money-driven science.”

This conference “takes us very far away from the views of both Pope John Paul II and the views of Pope Benedict,” said Mosher.

Pope Benedict said “that we must never forget that man is at the center of the environment, and if we’re protecting the environment we must protect men,” explained Mosher. “Where in that formulation can you have people come forward and argue that the population of the Earth should be rapidly reduced?”

He said it's “disturbing” to think about being unable to “differentiate” comments uttered at a Vatican conference “from a seminar at Stanford.”

“The light show on St. Peter’s façade was revolting enough, but to allow people who believe in this false gospel of radical environmentalism and radical population control and express … these ideas without being contradicted, without any hint of dispute, to have the Vatican itself provide a forum to propagate these falsehoods, it’s just – I mean I’m rarely lost for words, but words fail me,” he said. “I had a chance in South Africa to debate Paul Ehrlich years ago and he refused. I would have [been] delighted at the opportunity to debate at this forum in the Vatican, but I, and people with views like mine – which are to say, Catholic views, Trinitarian views – were not invited and I find that staggering as well.”