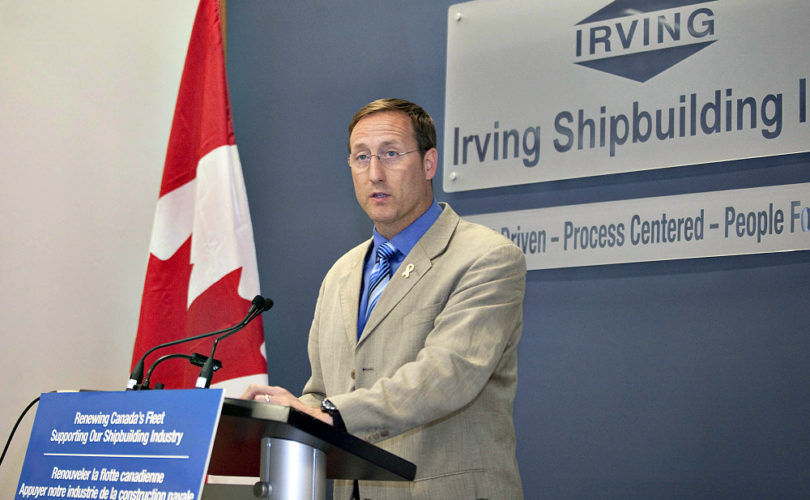 STELLARTON, Nova Scotia, May 29, 2015 (LifeSiteNews.com) – Peter MacKay, Canada’s pro-abortion justice minister for the past two years and former leader of the now-defunct Progressive Conservative Party, announced his retirement from federal politics Friday at a press conference in Nova Scotia.

“We won’t be sad to see him go,” said Mary Ellen Douglas of Campaign Life Coalition, which logs every MP’s vote on life issues and shows the strong pro-abortion voting record registered by the 49-year-old, who led the PC party into its historic merger with the Canadian Alliance Party in 2003.

Speculation began immediately that MacKay might intend to use his “retirement” to launch a leadership campaign in anticipation of Prime Minister Stephen Harper’s retirement before the 2019 election, whether he wins a majority in the election this October or not. MacKay himself dispelled this speculation, insisting he was leaving politics “for entirely personal reasons.”

MacKay went on to describe his devotion to his wife Nazanin Afshin-Jam, and his son Kian, and to announce his family’s expectation of a second child, a daughter, by year’s end. Though proud of his achievements and clearly happy with the leadership of Stephen Harper, who was on hand to provide MacKay a graceful introduction, he said that politics “makes it difficult to be a full and equal partner” in marriage and raising a family.

Fit, tall, oft-voted “Canada’s sexiest male” by the Hill Times, an independent Parliamentary newsletter, and lately married to a former beauty queen and human rights activist, MacKay declined to run against Harper for the leadership of the Conservative Party when it was formed in 2003 from the merger of the PCs, which he led at the time, and the much more numerous Canadian Alliance, which Harper led. The party they formed has governed Canada since 2006.

As foreign minister and then defence minister, MacKay was the point man for the Harper government’s controversial and hard-line positions in support of Israel and for military involvement in Afghanistan. As justice minister he championed victims rights.

Though a social conservative or “blue” Tory on most issues, according to Campaign Life Coalition’s scorecard, MacKay voted against nearly every measure that suggested restrictions on abortion. He voted against MP Stephen Woodworth’s motion to strike a committee that would have studied whether medical science sheds new light on when an unborn child becomes a human being; he voted against Bill C-510 in 2010, which would have protected women against coercion to have an abortion; he voted for the 2003 Reproductive Technologies Bill that opened the door to use of aborted fetal tissue for research.

Said Mary Ellen Douglas of Campaign Life Coalition, “He’s consistently voted on the other side. We wish him well in his future life, but we are not sad to see him go from Ottawa.”

But on euthanasia and assisted suicide, says Alex Schadenberg, the head of the Euthanasia Prevention Coalition, MacKay could not be faulted for his performance as justice minister since 2013, maintaining the government’s position that euthanasia is a homicide under the Criminal Code. “All I can say is: he held the line, he was always opposed to it. On abortion, I think he is one of those people with an eye to what his constituency wanted.”

Schadenberg also told LifeSiteNews he suspected MacKay was positioning himself for a possible leadership bid after Harper himself retires. “He is now free to work for the leadership without being seen as pressuring Harper.”

However, a Conservative insider who spoke with LifeSiteNews anonymously scoffed at the theory. Noting that recent polls suggest the Conservatives will be wiped out in the Maritimes, he said MacKay will hardly inspire support by abandoning the party just as it is kicked out of his own region.

As well, said the insider, MacKay would face a tough battle winning against the front-running leadership hopeful from Western Canada, Jason Kenney, the minister of defence and of multicultural affairs.

Kenney is credited with engineering the Conservatives’ success in winning over the increasingly important immigrant vote that predominates in the Greater Toronto Area. As well, Kenney is an ardent pro-lifer, as he demonstrated by his voting record and his attendance at the gala dinner following this month’s March for Life in Ottawa. The Tory insider, not a pro-lifer himself, nonetheless affirms, “Kenney would make a great leader.”