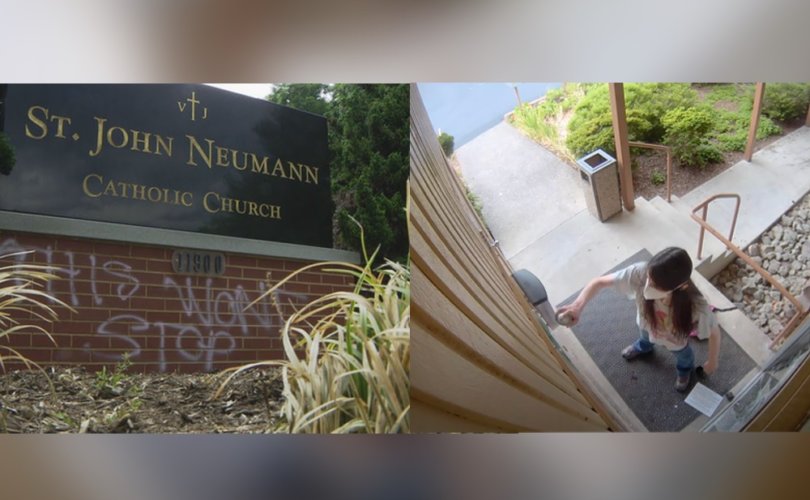 (LifeSiteNews) – Several Catholic churches were attacked in the days leading up to and in the wake of the Supreme Court’s ruling in Dobbs v. Jackson Women’s Health, which overturned Roe v. Wade, thus allowing states to pass their own abortion laws. The attacks range from Oregon to Philadelphia and involve vandalized signs and statues.

A statement from Fairfax County Police states that the vandalism was connected to Friday’s ruling. “We continue to have increased patrols at places of worship, connect with community and faith leaders, and are working with our regional law enforcement to determine who is responsible,” the statement said.

Pastor Father Joseph T. Brennan, OSFS responded to the attempted arson and vandalism in the parish bulletin by writing:

Apparently, these crimes were in response to the Supreme Court’s decision in Dobbs v. Jackson Women’s Health Organization which overturned the precedent set by Roe v. Wade. Regardless of where one stands on this issue, the President of the United States has strongly spoken against responding by using any violence. As a Catholic community of faith, we at St. John Neumann parish have strongly advocated for the respect and the dignity of all life from conception to natural death. We are also a welcoming faith community known for its hospitality.

St. John Naumann is located in the Diocese of Arlington.

St. Margaret’s Catholic Church in Buffalo was attacked between 10:00 p.m. Wednesday and 9:00 a.m. Thursday (before the Court’s June 24 ruling in Dobbs was announced). Several statues and garden pots were damaged. The investigation is ongoing.

A monument dedicated to honoring unborn babies killed in abortion at Holy Name Catholic Church was vandalized Friday night. The monument, which consists of a grotto of Mary holding the baby Jesus flanked by several tombstones dedicated to unborn babies, was covered with a gallon of red paint. Parishioners cleaned the monument Saturday morning with pressure washers, soap, and water.

Speaking to NOLA, a local news group, Father Eugene Jacques of Holy Name Church said that “What’s important for us is we’re going to pray for everybody in Mass today, even the people [who] did this.”

Louisiana has one of the strictest “trigger laws” in the country. Democrat governor John Bel Edwards signed two pro-life laws earlier this month, one that strengthened a pre-existing trigger law that was signed in 2006, and another last week that criminalized mail-order abortion pills. Louisiana’s last three abortion clinics closed Friday in the wake of the Dobbs decision.

All Saints Parish was vandalized in the wake of the Dobbs decision, with the sign in front of the church covered in graffiti: “If abortions aren’t safe, neither are you.” The message is identical with messages used by the radical pro-abortion terrorist group Jane’s Revenge. Also vandalized was Mother and Child Education Center, which suffered graffiti and broken windows, suffering about $10,000 in damages.

Speaking to Oregonlive, Ted Adams, assistant to Portland mayor Ted Wheeler, said that the attacks were “despicable” and proof that the city needed more police, reported The Catholic Sentinel.

St. Patrick’s parish was vandalized Saturday night with graffiti that reads “Abort the Church,” according to a tweet from Father Patrick Mary Briscoe, a priest who serves the parish. “Please pray for those who are afraid, who are suffering, for mothers who need our love and care, and for conversion of hearts and minds,” Briscoe tweeted.

Please pray for those who are afraid, who are suffering, for mothers who need our love and care, and for conversion of hearts and minds. pic.twitter.com/TiajbSfpvJ

St. Louise Catholic Church was vandalized early Tuesday morning. A masked vandal smashed a glass door and spray-painted the side of the building, video footage of the incident shows. The intruder “screamed profanities” at a woman who was alone in Eucharistic adoration and came out to investigate the commotion, CNA reported. She “ran back into the chapel. Terrified, she locked the door behind her and called the pastor, Father Gary Zender, while hiding behind a piano.”

“The attacker, who entered the church property around 9:30 a.m., also smashed a different glass door at the parish hall and defaced a statue of Our Lady, Undoer of Knots, Zender said,” CNA reported. “He estimated the damage at $10,000.”

Local police said that they arrested a 31-year-old “Bellevue resident on suspicion [of] a hate crime and assault after allegedly spray painting St. Louise Parish, smashing two doors and assaulting an employee. The suspect was arrested without incident.”

Officers arrested a 31yo Bellevue resident on suspicion off a hate crime and assault after allegedly spray painting St. Louise Parish, smashing two doors and assaulting an employee. The suspect was arrested without incident. pic.twitter.com/1UsDavNx08

Memo from the Archdiocese of Boston

The Archdiocese of Boston issued a memo Friday morning before the Supreme Court released its opinion on Dobbs, advising parishes of steps that could be taken to help protect themselves. The memo, which is similar in content to a memo released by the Diocese of Stockton in California, states that the Archdiocese was not made aware of any direct threats against churches.

“We would like to emphasize that there have been no direct threats received; however, we encourage all parishes and institutions to elevate the awareness and be prepared by taking the following precautions,” the memo states.

The precautions listed by the memo include asking local police for guidance and increased patrols during weekend masses, to assess locations and identify any doors that either cannot lock or are opened at certain times of day, and to invest in video surveillance where there is a risk of possible vandalism. The memo also advises the creation of a protocol “where possible” for screening visitors.

Earlier this month, the Department of Homeland Security (DHS) issued American bishops a memo warning them of danger to clergy and church property in the wake of the Dobbs ruling. Last Friday, DHS warned that terrorist activity could continue “for weeks” after the Dobbs ruling, stating that faith-based organizations could face an increase in attacks.

Shortly after a released draft opinion indicated that the Supreme Court was poised to overturn Roe, the radical pro-abortion group Ruth Sent Us, named for Justice Ruth Bader Ginsburg, threatened to “burn the Eucharist” as a protest against the Catholic Church’s unchangeable teaching on abortion. Catholic teaching states that the Eucharist is the literal body, blood, soul, and divinity of Jesus Christ.

“We promised to take increasingly drastic measures against oppressive infrastructures. Rest assured that we will, and those measures may not come in the form of something so easily cleaned up as fire and graffiti,” the extremist group threatened.

“From here forward, any anti-choice group who closes their doors, and stops operating will no longer be a target. But until you do, it’s open season, and we know where your operations are. The infrastructure of the enslavers will not survive.”