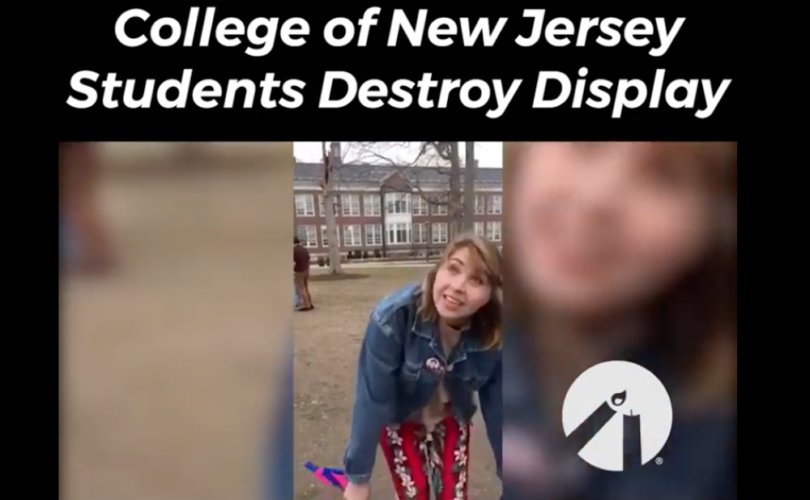 With permission from the Student Affairs office, the school’s Students for Life of America chapter had set up a “Graveyard of the Innocent” display on the campus grounds, the College Fix reports. It featured blue and pink flags symbolizing preborn boys and girls killed by abortion.

In the video, several students can be seen pulling the flags out of the ground and throwing them in a pile. One of the students has been identified as Courtney Woods, vice president of the campus chapter of pro-homosexual group PRISM. Students for Life believes several of the other vandals were PRISM members, as well.

“This is a graveyard for kids! Don’t you realize what you’re doing?” the SFLA member filming the incident challenged the vandals. Some replied that “they’re not kids, they’re fetuses,” and that the flags only represented “some cells that got flushed out.”

Another vandal looked into the camera while pulling up flags and said: “there are people on this campus who have gone through this experience, and seeing these flags is traumatic.” The pro-life student responded by asking why a reminder of “just a bundle of cells” would be traumatic. The pro-abortion student is not seen replying.

After uprooting all the flags, the vandals discussed what to do with them. Someone suggested throwing them in a trash can, to which the pro-lifer noted that “they’re not yours, that would be theft.” The vandal agreed to leave the pile there. The video ends with a vandal threatening to “take them out again” if Students for Life rebuilds the display.

Campus Reform adds that in a series of since-deleted tweets, one apparent student responds to the original pro-life display with “lol what the f*** is up with this school,” then proposes, “let’s steal the flags and plant flowers.” It is unknown whether the student participated in the vandalism.

“Our flag display was up for less than 24 hours and during that time there were at least six attempts of vandalism that we know of,” College of New Jersey Students for Life vice president Grace Gottschling said. “Our 1st Amendment Rights were ignored and our beliefs belittled.”

PRISM does not take an official position on abortion, and its president Andrew Fenwick emailed Students for Life to claim the incident “disheartened” him and was not “in any way encouraged or planned by PRISM.” He characterized Woods, the campus chapter’s vice president, only as an “individual PRISM member.”

A College of New Jersey spokesman confirmed that there would be a “formal discussion with all parties involved to determine what next steps are appropriate,” and that the school’s Dean of Students and Director of  Student Conduct and Dispute Resolution Services will meet with SFLA this week. The SFLA chapter also says it has identified the vandals and submitted the video to campus police.

“The vandalism at TCNJ is further proof that some students on college campuses cannot even fathom the idea that other people have free-speech rights,” Students for Life of America president Kristan Hawkins declared. “Despite the vandalism, TCNJ Students for Life are not letting this deter them from continuing to promote a culture of life on campus.”

Finally, SFLA notes that the day after the incident, the vandals temporarily erected their own display consisting of white and orange flags. It came with a sign declaring that the flags symbolized “the people here who believe you have the right to choose, to love, to protest,” and declaring “hate has no home at TCNJ.” But Students for Life had already reserved the space for both Thursday and Friday, so the pro-abortion display was soon taken down.