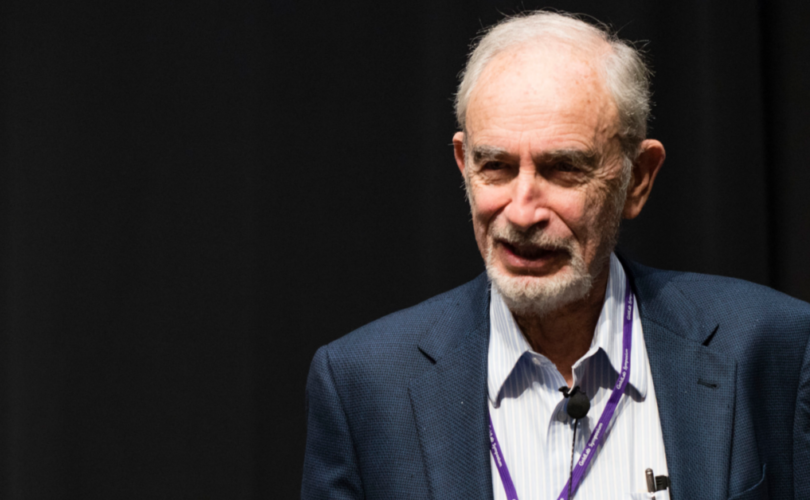 March 15, 2017 (LifeSiteNews) – Despite the “outrage and lies” of “right wing Catholic websites,” advocates of population control were treated with “fine hospitality” at a recent Vatican conference during which they were invited to speak, one of the pro-abortion presenters reported.

Paul Ehrlich, the undisputed father of the modern population control movement, trashed his critics in a blog post March 7.

“I was somewhat apprehensive about taking my invited place at the workshop on Biological Extinction of the Pontifical Academies of Science and Social Sciences at the end of February,” Ehrlich wrote in the post, titled Vatican Visit. “More than 10,000 people had signed petitions to get me (or us) excluded.”

Because of Ehrlich's long history of anti-Catholic advocacy, LifeSiteNews reported extensively on the event, and delivered a petition to the Vatican with over 10,000 signatures opposing it.

Maria Madise of Voice of the Family called it “scandalous” that Ehrlich was invited. The President of Women's Rights Without Frontiers, Reggie Littlejohn, said Ehrlich being invited “perplexed” her because “Ehrlich is anti-woman, anti-child, and ultimately, anti-humanity. It's his kind of thinking that gave rise to China's brutal One Child Policy.”

The Center for Family and Human Rights (C-FAM) and the Population Research Institute (PRI) also said the decision to invite Ehrlich was shocking.

Prolific Catholic blogger Father John Zuhlsdorf said the Vatican asking Ehrlich to speak at a conference was like asking “Sweeney Todd to cater your luncheon, [or] Jenna Jameson to preface your book on sacramental marriage, [or] Nero to head up the fire department, [or] Anthony Weiner to manage your social media, [or] Godfried Danneels to head your commission on abuse.”

Ehrlich wrote in his March 7 blog post that despite his concern about the opposition prior to the event, his “apprehension was unnecessary.”

“The view of the Academies, backed by the Vatican, was that 'all voices should be heard,'” according to Ehrlich. “The workshop, arranged by my old friends and colleagues Peter Raven and Partha Dasgupta, was one of the most productive and informative I have ever attended.”

“It was an assembly of stars,” he wrote. “The presidents of the two Academies, Werner Arber and Margaret Archer, and their Chancellor Msgr. Marcelo Sánchez Sarondo were open and friendly.”

Ehrlich wrote that all of the papers presented at the conference except for one were “excellent, as was most of the discussion.”

“There was essentially complete agreement that the drivers of the now-underway sixth mass extinction were human overpopulation, overconsumption by the rich, and inequity (poverty),” wrote Ehrlich.

At the conference, Ehrlich said, “the biggest problem we face is continual expansion of the human enterprise.”

“If you can’t take care of the [poor] people in your own society, when you live in a rich society, and so on, it tells us we really need very fundamental changes in our attitudes, our ethics, our morals, how we run the world,” he said.

The Catholic Church “has led the way in the battle against climate denial and long ago accepted the overwhelming evidence for evolution,” Ehrlich concluded. “In a civilization facing existential risks, it should be praised and supported for this attitude toward science.”

Prior to the conference, LifeSiteNews published a list of the most alarming things Ehrlich has said, including comparing human babies to garbage, suggesting forced abortion is acceptable under the U.S. Constitution, and suggesting sex-selective abortion might be a better fate than birth for baby girls.