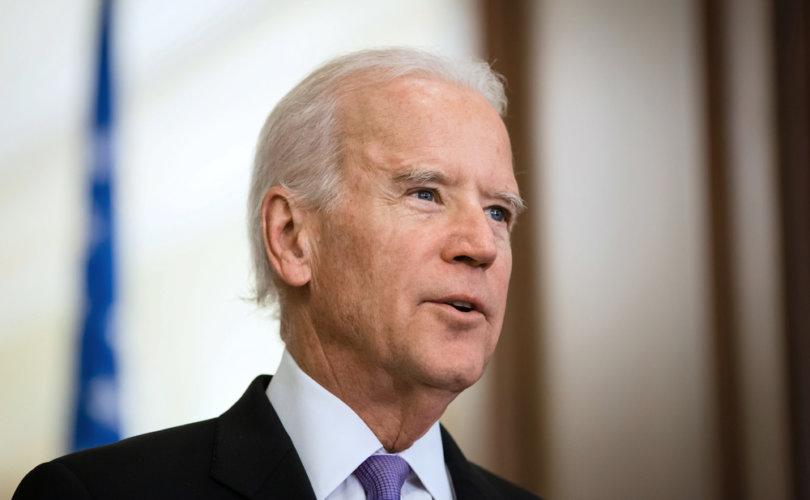 Biden’s invitation has sparked criticism because he supports the taxpayer-funded killing of embryonic human beings for research purposes.  He is also a vocal proponent of abortion, same-sex “marriage,” and the LGBT agenda, yet he flaunts his Catholic faith as an important part of his life.

As a Senator, Biden voted:

Biden has also spoken at events sponsored by the pro-LGBT group the Human Rights Campaign.

With Biden as its Vice President, the Obama administration has faced a slew of lawsuits from Catholic institutions that oppose the administration’s efforts to force them to fund contraception and life-ending drugs against their consciences.

The Pontifical Council for Culture and the Stem for Life Foundation, a U.S. organization that promotes ethical adult stem cell research, hosted the conference, titled “Cellular Horizons: How science, technology, information and communication will impact society.”

The conference focused on global efforts to fight cancer.

Pope Francis urged doctors and physicians to oppose “an economy of exclusion and inequality” that “victimizes people when the mechanism of profit prevails over the value of human life.”

In his speech, Biden discussed the theological virtues of faith, hope, and love, which he described as the “essence of religion,” and expressed his admiration for Pope Francis.  During his visit to the U.S., Pope Francis provided Biden and his family comfort in the aftermath of his son’s death from cancer, the vice president said.

According to published reports, Vice-President Joseph Biden, a Catholic, has joined Vatican officials in promoting health care for the poor, a noble idea to be sure. But I wonder if the pro-abortion Biden wants to include abortion and contraception in that health care he wants to provide for the poor. “Obamacare” certainly does. Just ask the Little Sisters of the Poor.