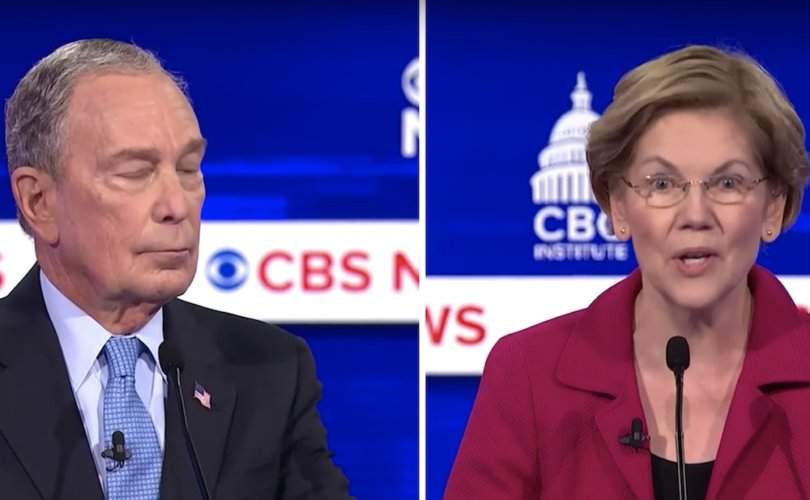 February 26, 2020 (LifeSiteNews) – In another series of bitter confrontations among the Democratic presidential contenders during a televised debate, Massachusetts Sen. Elizabeth Warren attacked former New York City Mayor Michael Bloomberg on grounds that raised numerous eyebrows, given her own stance on abortion.

“At least I didn’t have a boss who said to me, ‘Kill it,’ the way that Mayor Bloomberg (is) alleged to have said to one of his pregnant employees,” Warren said, according to a New York Post report.

“I never said that,” Bloomberg responded. He has previously denied the abortion remarks but admitted to making inapprporiate comments about women more generally. During Tuesday’s debate, however, he seemingly acknowledged having said something that, at the very least, could have been interpreted as suggesting an abortion. “I’m sorry if she heard, what she thought she heard, or whatever happened — I didn’t take any pleasure in that,” he said.

In response, Warren doubled down on her previous call for Bloomberg to “sign a blanket release (from the non-disclosure agreements accusers signed as a condition of their settlements) and let those women speak out so that they can tell their stories the way I can tell my story, without having to fear that they will be sued by a billionaire.”

While many have scrutinized Bloomberg over the allegation, pro-lifers found it curious to see Warren among them, in light of her own support for the legal power to “kill it” at virtually any point in pregnancy.

So let me get this straight….Elizabeth Warren is so offended by Michael Bloomberg’s suggestion that an employee have an abortion but she supports a woman’s right to ‘kill it’ at any point during the pregnancy….because that’s not offensive….at all. https://t.co/SU1sB1VWhU

As if killing babies actually matters to Elizabeth Warren and her pro-choice feminism. Ya right . Give me a break.

And she’s saying “kill it” now? Oh so you agree that abortion is murder?! Please explain, your radical views seem to be all over the place. https://t.co/wqCwBoOi41

Whoa whoa whoa. Warren just hit Bloomberg for saying “k*ll it” to a pregnant woman. Why? Doesn’t she agree?

Elizabeth Warren is a “Try Again and Kill It” Democrat. #BornAlive

Warren has called abortion safer than tonsillectomies and suggested that late-term abortions can be “act(s) of mercy” for disabled children, framed supporting abortion as necessary to being an “ally of women” and refuses to acknowledge any cutoff point for legal abortion, which she wants codified by federal law. In December, she said that if elected she intends to signal her solidarity with abortion-on-demand by wearing a “pink Planned Parenthood scarf” on inauguration day.