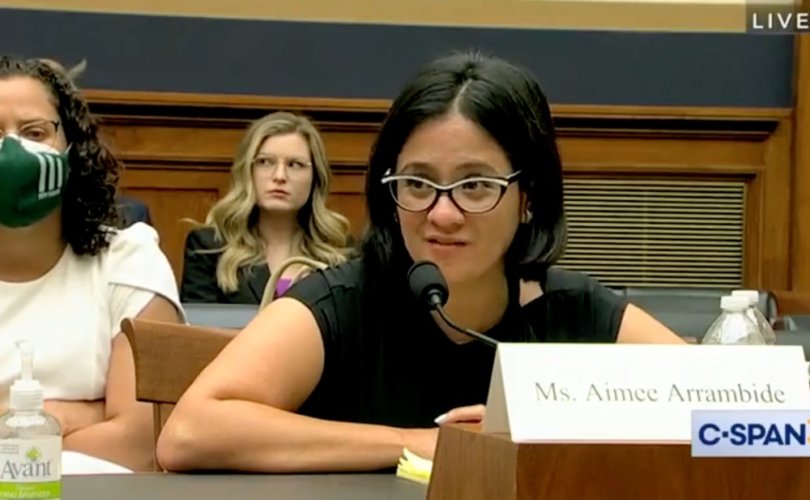 WASHINGTON, D.C. (LifeSiteNews) — A pro-abortion witness affirmed her adherence to the radical transgender ideology embedded in modern left-wing politics on Wednesday, telling a Republican lawmaker that men can get pregnant and have abortions.

— Article continues below Petition —
PETITION: Call on Biden to condemn violent pro-abortion rioters across America!
Show Petition Text
21356 have signed the petition.
Let's get to 22500!
Thank you for signing this petition!
Add your signature:
Show Petition Text

“What do you say a woman is?” Bishop asked during a House Judiciary Committee meeting focusing on “abortion rights.”

“I believe that everyone can identify for themselves,” Arrambide answered.

Bishop pressed the witness further, asking, “Do you believe then that men can become pregnant and have abortions?”

Rep. @jdanbishop: “Do you believe men can become pregnant and have abortions?”

In response to questions from Republican Rep. Mike Johnson of Louisiana, the pro-abortion activist continued to assert that she trusts “people to make decisions about their body” even in the case of extremely late-term abortions.

“So abortion should be allowed, then, by your definition, for any reason, for any purpose, at any stage, right?” Johnson asked.

“I trust people to make decisions about their body, and then when relevant, I think that they need to consult their medical practitioners, and not Congress,” Arrambide said.

Arrambide dodged the question, once again saying, “I trust people to determine what to do with their own bodies,” and adding, “Full stop” after Johnson reacted with an expression of disbelief.

Can’t get over this clip of @RepMikeJohnson leaving an abortion advocate absolutely speechless by simply asking for the distinction between a baby just before it’s born and when it is 2 years old. pic.twitter.com/13yy4qQV7B

Daily Wire podcaster and author Michael Knowles responded to Arrambide’s testimony in a May 18 tweet, noting that the professional pro-abortion advocate’s inability to defend the reality of abortion is due to the nature of abortion itself.

“This woman is a professional pro-abortion activist, and she can’t defend abortion against even the most basic criticism,” Knowles said. “It’s not her fault: Abortion is indefensible.”