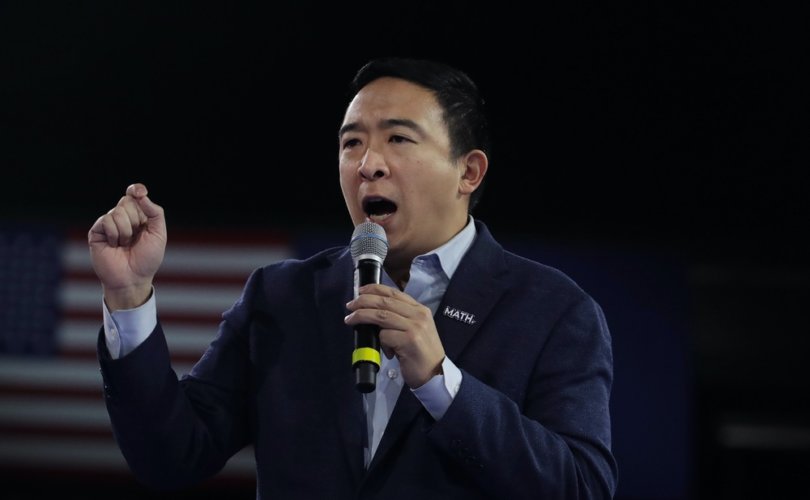 February 11, 2020 (LifeSiteNews) – Democrat presidential candidate Andrew Yang is just as far left on abortion as the rest of the 2020 primary field, but he finds himself at odds with pro-abortion activists this week for a recent rhetorical overture he made to voters who are more moderate on the issue.

During a candidate’s forum on the issue this weekend, the entrepreneur said Democrats “have to get back to the point where no one is suggesting that we be celebrating an abortion at any point in the pregnancy,” The Blaze reported. “There was a time in Democratic circles where we used to talk about it being something, like, that you don't like to see, but should be within the freedoms of the woman and the mother to decide.”

“There is a really important tone to set on this, where you don't just say, like, we're absolutist about it, though I have to say I am relatively absolutist about it on this,” Yang continued. “Like I think that it should be completely up to the woman and her doctor and the state should not be intervening all the way through pregnancy. But it's a tragedy to me if someone decides they don't want to have a child and they're on the fence and then maybe at some point later; it's a very difficult personal decision and it's something that we should be very, very sensitive to. I think that celebrating children, family, like these are universal human values and if we manage to lead on that and say that we also stand for women's reproductive rights, I believe we can bring Americans closer together on a really, really important personal issue.”

Various pro-abortion activists, commentators, and other figures responded with outrage, denying that anyone celebrates abortion and calling on Yang to drop out of the race for the offense of echoing “forced birth” rhetoric:

It is time for Yang to drop out. This take on abortion is completely disqualifying. Using this type of language is part of the forced birth movement. #notademocrat #AbortionIsARight #abortionishealthcare https://t.co/HSqJ0qpNow

Andrew Yang would be a bad president, and he might be a bad person, too. https://t.co/fVaSiXCM77

It's none of my business whether you celebrate your abortion, and wagging my finger if you do is obscene. A tragedy? Some abortions are the only way through a tragedy, or the only way to avert a tragedy.

Cool. So in summary, Yang is fine with safe and legal abortions, as long as women feel judged and ashamed while getting them.

Glad we've cleared that up. https://t.co/2zqJ7hKRcC

Every time a male candidate opens his mouth on abortion, childcare or “family values,” it underscores more deeply how much, after well over two centuries of America’s existence, we need a woman as president https://t.co/wdCv8IlcQy https://t.co/QrpAndvvQb

Counterpoint: no person should feel ashamed for getting an abortion, and part of eliminating that shame is removing the stigma. And part of removing the stigma is celebrating choice. Andrew Yang needs to talk to the repro community more about this. He's not listening fully. https://t.co/WsNo3FVRhJ

Abortion is an incredibly common human experience, one that deserves dignity and respect. You don’t get to lead the Democratic Party in 2020 if you belittle and demonize those who’ve had abortions and those who’ve defended and supported them.

In fact, there are many documented examples of politicians and activists celebrating abortion, such as New York officials lighting the One World Trade Center spire pink to commemorate the enactment of the so-called Reproductive Health Act (passage of which was met with thunderous applause in the state capitol), the Shout Your Abortion movement, various stunts from pop stars such as Miley Cyrus and Selena Gomez, and various events such as art galleries, bowling fundraisers, and parties to promote and normalize abortion.

Last fall, the group Unite for Reproductive and Gender Equity (URGE) erected “Abortion: You Do You” billboards meant to, in executive director Kimberly Inez McGuire’s own words, “celebrate that individual autonomy and abortion access.” In 2018, comedian Michelle Wolf performed a “Salute to Abortions” skit on her since-canceled Netflix show, complete with music, confetti, and the declaration “God bless abortions!” In 2011, a disturbing incident was filmed in Rockford, Illinois, where activists outside of an abortion facility cheered a pregnant mother entering the building to have her baby killed.

There is no sizable, organized pushback against such incidents among supporters of legal abortion, who generally allow them to go entirely unmentioned.

While Yang’s moderate messaging and friendly demeanor have won him a small handful of conservative and pro-life fans, a review of his public statements confirms he is just as extreme as his fellow Democrats.

Yang’s campaign website declares that “access to birth control” as well as to “safe and affordable abortion services” should “be provided to all Americans,” with state abortion laws “subject to oversight by a board of doctors.” His campaign told The New York Times in November that he favors codifying Roe v. Wade in federal law, has a pro-Roe litmus test for judicial nominees, would not regulate post-viability abortions, would federally fund abortions and Planned Parenthood at home and abroad, would force private insurers to fund abortion and contraception, would make contraceptives and abortifacients available over-the-counter, and would ban abstinence-only sex education.

During the same event where he dissented from “celebrating” abortion, Yang also declared that “abortion rights are economic rights.”