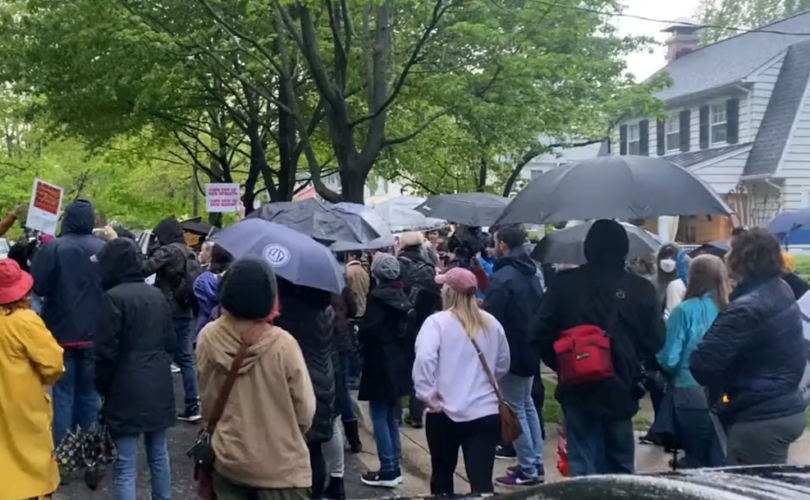 Breitbart has pointed out that the demonstrations, which have already targeted Chief Justice Roberts and Justice Kavanaugh and are being planned for the homes of the remaining conservative justices, violate federal law.

18 U.S. Code § 1507 on “picketing or parading” states that anyone with the “intent of influencing any judge … in the discharge of his duty, pickets or parades in or near … a building or residence occupied or used by such judge” shall be fined or imprisoned up to a year.

The pro-abortion group “Ruth Sent Us,” named after the late pro-abortion Supreme Court Justice Ruth Bader Ginsburg, recently published the addresses of what it called “extremist” conservative Supreme Court justices expected to help overturn Roe, ahead of a planned “walk-by” protest at each home on May 11.

The White House issued a statement Monday morning addressing the doxxing-induced protests, appearing to conditionally support the protests without addressing their legality.

Press Secretary Jen Psaki tweeted, “@POTUS strongly believes in the Constitutional right to protest. But that should never include violence, threats, or vandalism. Judges perform an incredibly important function in our society, and they must be able to do their jobs without concern for their personal safety.”

Psaki previously said she does not “have an official U.S. government position on where people protest.”

Chief Justice Roberts, who has indicated that he is “exploring ways to uphold” Mississippi’s 15-week abortion ban without overturning Roe, as Breitbart noted, and did not join the leaked draft Dobbs opinion, has been one of the first justices mobbed by pro-abortion activists.

Videos posted to Twitter show protestors chanting “Pro-life is a lie, you don’t care if people die” and “Keep abortion safe and legal” outside Roberts’ home. Pictures of hangers drawn in chalk can also be seen on the street, a reference to the claim of many pro-aborts that legal limits on abortion will lead women to resort to using hangers to perform their own abortions.

The crowd also chanted outside Roberts’ house, “The whole world is watching.”

Pro-aborts also descended upon Kavanuagh’s home after one of his neighbors reportedly organized a protest. Lacie Wooten-Holway, the woman who shares Kavanaugh’s Chevy Chase neighborhood, portrayed a reversal of Roe as a “doomsday” scenario, adding, “so I’m not going to be civil to that man at all.”

According to Breitbart, following the online publishing of the home addresses of the conservative justices, Alito and his family “have been moved to an undisclosed location for safety, according to interviews on Fox News and WMAL radio.”

“This protest looks like another blatant attempt to intimidate the judiciary and anyone who disagrees with a radical agenda pushed by partisan advocates,” said Sen. Chuck Grassley (R-Iowa) of the protests, according to The Hill.