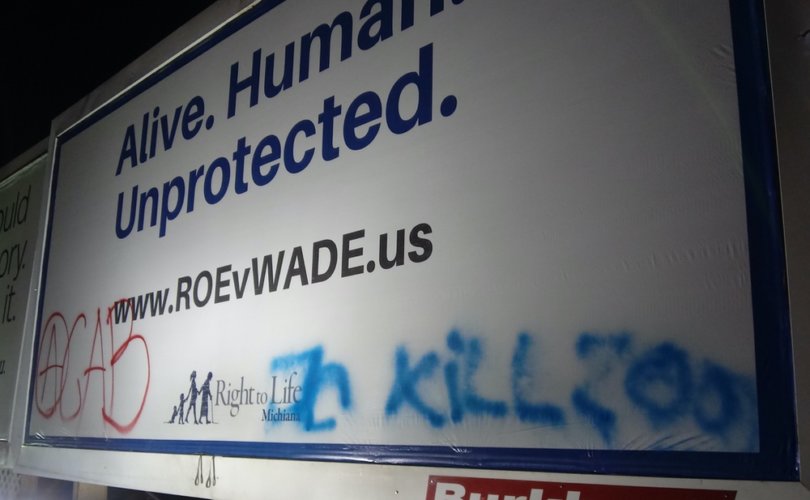 SOUTH BEND, Indiana, February 5, 2020 (LifeSiteNews) – An Indiana pro-life billboard educating the public about the deadly legacy of Roe v. Wade was vandalized this week – the third time in five months that a pro-life outdoor ad in the area has been vandalized.

The billboard was sponsored by Right to Life Michiana and featured a web address that directs people to the website of St. Joseph County Right to Life. It was vandalized with two different tags; one was anti-police acronym “ACAB” and the other was anti-life message “Kill 200.”

“This is concerning. The vandalism is escalating from simply hiding helpful resources to promoting violence,” said Jackie Appleman of Right to Life Michiana. “Unfortunately, this isn’t surprising because the abortion movement is intolerant to other views and promotes violence.”

Since the Supreme Court’s Roe v. Wade decision in 1973, more than 60 million human babies have been killed by abortion. This is more than all the American lives lost in war since the nation’s inception. The purpose of the Roe v. Wade billboard campaign is to educate the community about “the destruction of this immoral decision,” according to Right to Life Michiana.

“Nothing the abortion movement does is going to stop us,” said Outreach Manager Melanie Garcia. “Nothing’s going to stop us from being out there and educating the public on the value of life and violence of abortion.”