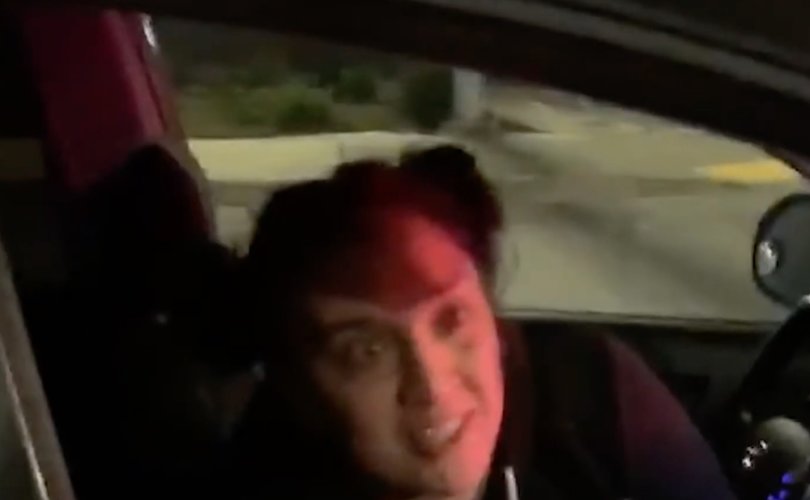 BELLINGHAM, Washington, March 9, 2020 (LifeSiteNews) – Abortion supporters threw a glass vial of liquid at pro-life students who were praying outside of an abortion facility on Saturday, yelled “Hail Satan,” and masturbated in a car towards them.

“Satan is the one true lord!” one abortion supporter says in a video released by Students for Life of America (SFLA).

Reacting to the news, SFLA president Kristan Hawkins said that the violence and ugliness on behalf of pro-abortion advocates cannot be tolerated.

“The threats and vitriol must be stopped,” said Hawkins. “Every day it seems like we hear of a new account of vandalism, threat of violence, or acts of intimidation towards peaceful pro-lifers.”

The student group targeted on Saturday were Whatcom Community College Students for Life, who were participating in 40 Days for Life.

“This kind of intimidation causes some [of] our volunteers to feel uneasy to sign up to pray for mothers and preborn children during a 40 Days for Life event. We are only 11 days in, and we have already been bullied and threatened to the point where our volunteers are nervous to go alone,” commented Lindsey. “But we will not back down because this just demonstrates how evil the abortion industry is. We will stand united together and not let the bullies stop us even though the violence of abortion is celebrated by increasingly violent people.”

This is not the first incident of violence at a Students for Life/40 Days for Life event, either. Recent instances of pro-abortion threats and violence include a bomb threat in Minnesota, a September death threat against Hawkins, and arson at Western Washington University.

“What happened Saturday shows us the worst of the worst of” the pro-abortion movement, observed Hawkins: “obscenity, Satan worship, and lewdness towards students.”

“Whatcom Students for Life bravely stood up against the threats of intimidation and the obscenities hurled at them by violent pro-choicers,” she said. “Such violence is always tragic, but more and more commonplace, especially in a time in which the Senate Minority Leader threatened two Supreme Court Justices for possibly being pro-life.”