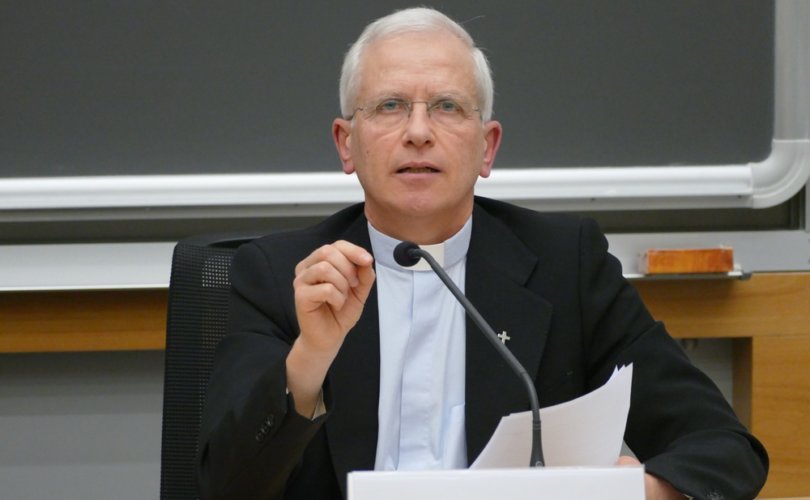 ROME, September 12, 2019 (LifeSiteNews) — In the latest incursion of the ecclesiastical culture of death into those institutions established by St. John Paul II, a notorious clerical proponent of artificial contraception and homosexual unions has officially been hired to teach at the Pontifical John Paul II Institute in Rome.

According to a new course list for the 2019-2020 academic year, published on Sept. 11, Italian moral theologian Father Maurizio Chiodi will teach a licentiate-level course titled “Theological ethics of life,” and a doctoral seminar called “Conscience and discernment. Text and context of Chapter 8 of Amoris Laetitia.”

Fr. Chiodi has used the controversial chapter 8 of Pope Francis’s summary document on the family to justify the use of artificial contraception and to argue for the moral goodness of homosexual relationships.

In 2016, Fr. Chiodi delivered a lecture at a pontifical university in Rome saying there are “circumstances — I refer to Amoris Laetitia, Chapter 8 — that precisely for the sake of responsibility, require contraception.”

When “natural methods are impossible or unfeasible, other forms of responsibility need to be found,” he argued. In such circumstances, Chiodi said, “an artificial method for the regulation of births could be recognized as an act of responsibility that is carried out, not in order to radically reject the gift of a child, but because in those situations responsibility calls the couple and the family to other forms of welcome and hospitality.”

More recently, in a July 2019 interview with Avvenire, published after the mid-summer “purge” of the JPII Institute in Rome, Chiodi suggested on the basis of Amoris Laetitia that sexual acts within a homosexual relationship can be good, at least in certain circumstances.

Fr. Chiodi continued: “It is clear that, within a historical perspective, everyone is asked not only what is possible for them, but also what is possible for them at a given time in their lives. From this point of view, it seems to me that it is difficult — indeed impossible — to give pre-packaged answers, as if all the practical answers could be deduced immediately from an anthropological theory.”

The Italian moral theologian added: “I believe that the relationships of homosexual couples present gaps and undeniable differences that prevent them from being equated with heterosexual couples, annulling their diversity. Nevertheless, the moral task concerns actual possibilities, that is, the possible good, which considers the actual history of a subject.”

One day after the interview, LifeSiteNews confirmed that Fr. Chiodi had been invited to teach at the restyled institute by its new Chancellor, Archbishop Vincenzo Paglia.

Then, on Sept. 4, after the normal summer hiatus in Rome, the Vatican’s L’Osservatore Romano featured an article by Fr. Chiodi on the “renewal” of the John Paul II Institute, titled: “The Tradition reinterpreted in the Present Time.”

Fr. Chiodi is not the only controversial professor to be hired at the new John Paul II Institute. According to the new course listing, Fr. Pier Davide Guenzi, another clerical proponent of homosexual unions, will teach a doctoral level course on “The idea of natural law in the Bible,” and a course titled “Anthropology and ethics of birth.” The bibliography for the latter course includes a text by Fr. Maurizio Chiodi.

In a February 2019 interview with Avvenire, Fr. Guenzi, who is president of the Association of Moral Theologians and a colleague of Chiodi at the Northern University of Italy in Milan, argued on the basis of Amoris Laetitia that homosexual relationships can be morally good.

“Urged on by the experiences of homosexual believers,” he said, “today we are invited to understand how … the bond between man and woman does not exhaust all human forms of expression, even from the affective point of view.”

While ample room in the 2019-2020 course list has been given to courses and seminars taught by Chiodi and Guenzi, bedrock courses such as the one on fundamental moral theology taught by respected moral theologian and former JPII Institute President Msgr. Livio Melina, and several in special moral theology, have been eliminated.

While Benedict XVI has openly expressed his “solidarity” with Msgr. Melina and promised his prayer, Pope Francis has chosen to remain silent as Archbishop Paglia carries out the “purge” of the Institute founded by Pope John Paul II.