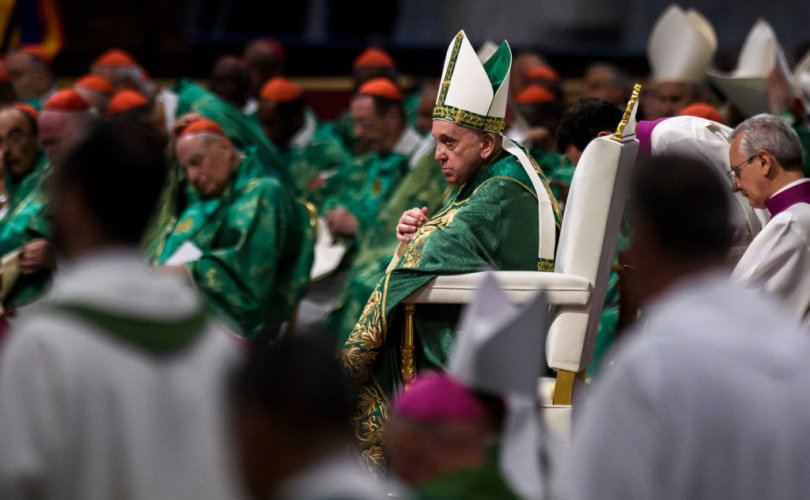 VATICAN CITY (LifeSiteNews) — A number of controversial figures supporting contraception and opposing the traditional Mass have been announced as the “experts” responsible for drawing up the key document which will guide the next stage of the Synod on Synodality.

At a press conference held in the Vatican Friday to discuss the next stages of Pope Francis’ multi-year Synod on Synodality, a document was distributed outlining the updates to the process. Among its pages were the names of the “experts” responsible for drawing up the document for the Continental stage of the Synod, which will be the working document or instrumentum laboris. Based on the summaries submitted from dioceses around the world, this document will be published in October this year and will guide the discussion taking place at bishops’ conferences over the next several months.

This document, and the discussions born from it, will then be the basis of the October 2023 Synod of Bishops in Rome when the bishops will assess a second version of the instrumentum laboris.

The Synodal process has already raised concerns among faithful Catholics who fear it could be used as a process to permit non-Catholic teachings and practices to become widely practiced and de facto accepted. Such fears are already being highlighted in a number of the local, diocesan synodal reports and Vatican’s synod resources.

The list of “experts” responsible for drafting the working document will not alleviate fears already raised by traditional Catholics, as the experts include Austen Ivereigh, the controversial papal biographer and promoter of same-sex civil unions, and Fr. Philippe Bordeyne, the pro-contraception head of John Paul II Institute of Marriage and Family. A number of the other “experts” are noted for their opposition to the traditional Mass or ardent promotion of Pope Francis’ view of “synodality.”

With doubts surrounding Catholic teaching on homosexuality and contraception currently widely spread throughout proponents of the Synod, it remains to be seen what the “experts” will propose in the instrumentum laboris.

Perhaps one of the most notable is the inclusion of Austen Ivereigh, who has found favor with Pope Francis through his biographies of the pope, the second entitled: “Wounded Shepherd: Pope Francis and His Struggle to Convert the Catholic Church.”

Ivereigh was a senior advisor to Westminster’s Cardinal Cormac Murphy-O’Connor – a prelate who was a leading member of the notorious St. Gallen Mafia and who played a key role in electing Pope Francis. Ivereigh, who remains unmarried, resigned his post with the cardinal in 2006 after admitting to two relationships: one in 1989 which resulted in abortion and another more recent affair which resulted in the mother having a miscarriage.

He denied manipulating or forcing the woman he had relations with in 1989 to have an abortion but admitted to paying for half of the abortion costs.

Commenting on Ivereigh’s inclusion among the “experts,” U.K. catechist Deacon Nick Donnelly told LifeSiteNews that it “is alarming.”

“Ivereigh is a professional Catholic who has been aligned with those promoting dissent throughout his career,” said Donnelly. “He was the press secretary of Cardinal Murphy-O’Connor of Westminster, a leading member of the Saint Gallen Mafia that clandestinely opposed the pontificates of John Paul II and Benedict XVI.”

Donnelly highlighted that Ivereigh, “as one of the founders of the U.K. media group Catholic Voices, supported civil unions for homosexual persons, contrary to the CDF directive of 2003.”

Since Pope Francis’ accession, he has been outspoken in his attacks against faithful Catholics who oppose the pontificate’s neo-modernism. In January, Ivereigh penned an article justifying Pope Francis’ merciless treatment of traditional Catholics, who he characterised as so wickedly corrupt as to be undeserving of the condescension of Bergoglio’s dialogue.

“Ivereigh’s involvement in the synodal process confirms suspicions that this consultation is a sham with a predetermined outcome to illegitimately change the doctrine and discipline of the Church,” added Donnelly.

Somewhat buried in briefing on next phase of synod is novelty that in Jan-Mar 2023 regional assemblies of the People of God, i.e. not just bishops but of laity, religious, etc. will “re-read” fruits of synod so far. In Europe it will be in Prague in Feb, others tba. Details: pic.twitter.com/xKT4n0Hy3y

Joining Ivereigh is Monsignor Philippe Bordeyne, the Dean of the Pontifical John Paul II Theological Institute for the Sciences of Marriage and the Family. LifeSite has provided detailed coverage of Msgr. Bordeyne, noting last year how he is a proponent of Amoris Laetitia, a critic of Humanae vitae, and a defender of a more welcoming approach to homosexual partners.

in Bordeyne’s eyes, contraception can not only be regarded as “licit” from a moral point of view, but as a “medicine,” a “technology” that can be “humanized” because Catholic couples should love each other twice as much when using it. This is a contradiction of Church teaching and an inversion of values on a monumental scale.

Opining on Bordeyne’s move to the John Paul II institute, French philosopher and author Thibaud Collin described it as a “real and true revolution” which heralded the imminent rejection of Humanae Vitae.

“The appointment as manager of a figure like Philippe Bordeyne confirms that the John Paul II Institute, in full hemorrhage of students, should for the sake of intellectual honesty change its name,” he wrote. “It could be called, for example, the ‘Amoris Laetitia’ Institute.”

— Article continues below Petition —
PETITION: We won't give any money to liberal bishops who attack the Faith
Show Petition Text
11461 have signed the petition.
Let's get to 12500!
Thank you for signing this petition!
Add your signature:
Show Petition Text

Theologian advising the CDF with strong support for ‘synodality’

Another of the “experts” is Monsignor Piero Coda, the Secretary of the Pontifical International Theological Commission which advises the Congregation for the Doctrine of the Faith. Coda has a long history of promoting synodality at the Vatican, describing the current event as “the most important ecclesial event since the Second Vatican Council.”

He highlighted Vatican II as bringing about a key change in the Church, prior to which “a pyramidal, hierarchical vision prevailed mainly,” which “often prevented all the energies of the Spirit present in the People of God from being valued.”

Speaking to L’Osservatore Romano last year, he referenced a “great impetus to the renewal of the theological content and language” coming from Francis, praising “a disruptive creative energy” which was now “being released” in the Church.

Vatican regulars and opponents of Tradition

Coda is joined by another individual known in the Vatican, Father David McCallum, S.J., who serves as the executive director of the Program for Discerning Leadership – a program which “provides leadership formation for senior Vatican officials and major superiors of religious orders in Rome.”

Archbishop Timothy Costelloe, the president of the Australian Bishops’ Conference and Archbishop of Perth, is another name in the “experts” line-up. Last autumn, Costelloe shocked Australian Catholics when he oversaw an indigenous pagan ritual at the beginning of the 5th Australian Plenary Council’s Opening Mass. The ceremony – reminiscent of the recent smudging ceremony Pope Francis attended in Canada – used smoke “to cleanse the bad spirits away from the area,” with Costelloe taking part in the ritual “cleansing.”

In the last number of years, Costello has been enacting a number of policies restricting a local, thriving Latin Mass community in the archdiocese, severely impacting the community – which had built up since 2008 – by making them “homeless,” seemingly against the directives of his predecessor.

Another notable member of the document’s drafting team is Rafael Luciani, a Latin American theologian who is very public about his support of the current pontificate’s ideology. Interviewed by the dissident National Catholic Reporter last year, Luciani praised “synodality” as retrieving “a more dynamic and inclusive model of being and acting ecclesially,” arguing that “we need … a fresher model of being church, imagining and building new structures that reflect a more synodal model and that involve the laity much more in decision-making processes.”