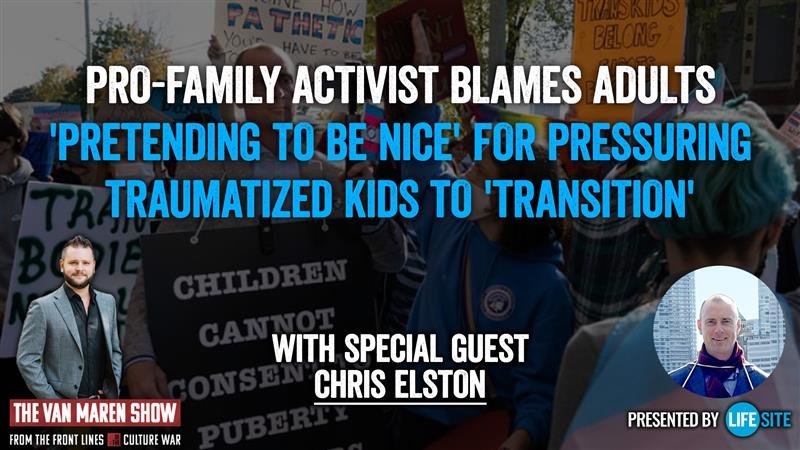 (LifeSiteNews) — Chris Elston, an activist who opposes “gender transitioning,” joined Jonathon on this week’s episode of The Van Maren Show for a discussion on what makes children really believe they’re the opposite sex.

Elston’s approach to activism involves going out with signs — e.g., “Children Cannot Consent to Puberty Blockers” — and talking to everyday people. He says more than 90 percent of those he encounters agree with his message, and his goal is to continue increasing awareness because pro-transgender activists are a very outspoken and well-funded minority.

“It’s not going to impact anyone like it does a parent when you talk about all this harm that’s coming to kids,” he said. “And these parents need to understand that their own children are not immune to this ideology. It’s getting taught in schools. It’s all over social media.”

Elston wants parents to understand that the overwhelming majority of children with gender dysphoria eventually grow out of it. He also makes it clear that children who claim to be the opposite sex don’t always suffer from gender dysphoria.

“Almost half of these kids are on the autism spectrum,” he said. “ADHD is super common. Trauma, abuse, sexual abuse, and in a lot of cases it’s not gender dysphoria at all. It’s body dysmorphia. They just hate their body, so they hate parts of their bodies.”

Transgender ideology itself, Elston adds, is particularly pernicious not just because it’s grounded in lies. It also indoctrinates children into rejecting their parents and sets them up for further emotional and mental health issues down the road.

“[These kids] who have cut off their parents and who are now suicidal because they are females in their 20s, going bald, have a deep voice, can’t undo this irreversible damage done all because they were simply affirmed as a child by fools pretending to just be nice to these kids,” he said. “But these fools didn’t have the courage to simply say the truth and say, ‘It’s OK, honey, if you don’t feel like you’re fitting in. It’s OK that puberty is a tough time. It’s tough for all of us. We simply need to grow up and these feelings are going to go away.'”