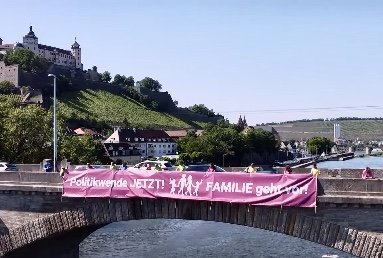 WÜRZBURG, Germany, June 29, 2020 (LifeSiteNews) – Well-known German pro-family advocate Gabriele Kuby spelled out this past weekend at a conference the numerous issues that many families, especially their children, are facing today, from divorce and fatherlessness to gender ideology and government policies that harm the traditional family.

“It is indeed a huge problem in our society that fathers are absent,” she said. “It is proven that children who grow up without a father who has the task of setting boundaries, giving orientation, being firm, having courage, making the child brave – if all this is missing, which the father can do much better than the mother, if all this is missing, the chances that the child will become delinquent, have mental disorders, behavioral problems, etc., take drugs, drop out of school, are much higher.”

The trained sociologist repeatedly referred to scientific research, which, Kuby said, proves “what everyone knows in their hearts.” American sociology professor Mark Regnerus, for instance, studied whether situations in which children grow up with two men or two women as “parents” are as healthy as the traditional family.

“It has disadvantages for children if they don’t experience this triangulation, as the word is called, this triangle of father, mother, child, but only two fathers or only two mothers,” Kuby pointed out.

Kuby made her remarks during a panel discussion last Sunday, which was streamed by pro-family organization “Familie geht vor!” (Family first!), uniting numerous other groups supporting the family. Originally, “Familie geht vor!” had planned to have an outdoor event with thousands of families in Würzburg in the heart of Germany. Due to the coronavirus pandemic, the event was mainly held online.

On the question of divorce, Kuby continued, “There is no doubt at all that divorces are a great burden on children and that they are basically a lifelong burden.

“A divorce is for a child … a constant drama, because there is no more stability,” she explained. “They have to go through new combinations again and again. The partner marries again, separates again, there is an unmanageable system of relationships, and the child has to go through it again and again, and approve of it.”

Kuby said, “It is not acceptable for a society to say that the emotions and the desires and the passions and the suffering, which also exists in marriages, of course – that this is the only thing we are guided by. And the children have to submit without complaining.”

According to Kuby, who supported her statements by referencing several studies, children and young people generally long to have a family, as well as faithfulness in their relationships. “This longing cannot be eradicated in the hearts of the people,” she commented. “This is the good news, and we can build upon it.”

Kuby also criticized the daycare system, where working parents place their children, sometimes only at a few months old, as incredibly stressful. “The children get sick from it,” she pointed out. However, the system does not benefit parents, either, Kuby said. Parents are “exhausted from their jobs … coming to the daycare, receive this poor little worm, and then they are supposed to spend quality time with the children.”

The German government, the pro-family advocate explained, heavily supports parents who put their children in the daycare system early on. “I am in favor of freedom of choice,” Kuby said, “but we cannot choose if we don’t have the material conditions among which we can choose at all. And if the daycare is supported, supported, supported, with 1,000 euros a month, and mothers receive 120 euros for retirement, then there is no freedom of choice.”

The sociologist talked about the unseen consequences of the daycare system. According to studies, up to one-third of the young generation are ill in one way or another, with acute illnesses turning into chronic conditions. Even from an economic point of view, the cost of the daycare system, if everything is factored in, far exceeds the cost of not having mothers in the workforce a few weeks after their babies are born.

In the end, Kuby briefly talked about gender ideology, pointing out that it has been imposed on countries by the United Nations, the World Health Organization, and the European Union.

Richter lamented the loss of a parenting culture. “We hunger to experience: How does family work? How do we do it? We have already forgotten how to do it. Our instincts are already gone. I experience many parents simply on a hamster wheel, working through all these activities.”

“We don’t even have a feeling for it anymore, and we also lose this knowledge of what the children really need. They need to bond, and the way children bond in early childhood is not compatible with a professional activity of the woman who is absent, then.”

Bischoff emphasized that after his move to a small town in Bavaria, the elderly living on their street are incredibly happy about having kids around. His neighbors said they even turned off the television to listen to the kids playing.

The organization “Familie geht vor!” consists of 15 different groups and several individuals advocating for the protection of marriage and the family, the right of parents to educate their children, the right of children to their one mother and their one father, and financial justice for families. The organization opposes any indoctrination by homosexuality and gender ideology.

Hedwig von Beverfoerde, a speaker for “Familie geht vor!” and leader of “Demo für Alle,” another pro-family group, said, “Anti-family ideas continue to spread and are gradually being implemented politically – pushed by powerful lobby groups and the media. In contrast, we demand a political turnaround in favor of the family. To achieve this goal, we need to fly the flag effectively in the public eye.”

While it was not possible to have families from across Germany come to Würzburg, several activists were present in the city nonetheless, trying to get people to support the cause of the family.