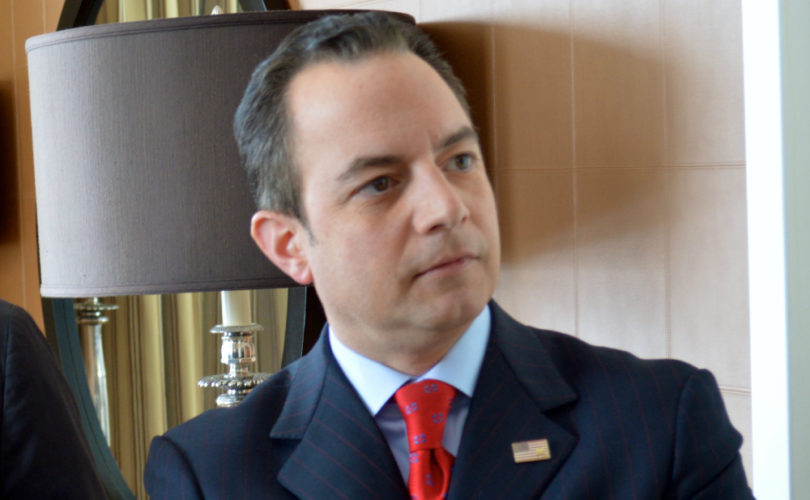 One pro-life leader lauded Priebus for stating that he has the pro-life cause “woven in my heart,” and Family Research Council president Tony Perkins praised the outgoing RNC chief for “revitaliz[ing] the GOP by returning the party to its conservative principles as is evidenced by the GOP’s solidly conservative platform.”

Both Priebus and Bannon are reassuring choices. https://t.co/6k80dyWL3U

With Bannon as chief strategist, the revolution continues. And that is good.

Of the two men, Bannon drew much more ire from liberal activists and media critics, who sought to portray him as a “white nationalist” racist and anti-Semite, based on Breitbart’s reporting and readership. But conservative writer David Horowitz, who is Jewish, shot back against at the Left’s post-Trump “bizarre hysteria,” which he said has made Bannon “the straw man of the hour:”

I have known Steve Bannon for many years. This is a good man. He does not have an Anti-Semitic bone in his body. In his new position as Chief Strategist in the Trump White House, Bannon is the strongest assurance that people who love this country can have in America’s future, the strongest assurance that America is in the hands of people who will give this country a chance to restore itself and defend itself against its enemies at home and abroad.

On the other side, Ben Shapiro, author and founder of the conservative site Daily Wire, gave voice to the widespread resentment among social conservatives that, during the GOP primary, “Bannon manipulated Breitbart News into a Cruz-bashing Trump propaganda outlet.” Shapiro also criticized Bannon and Breitbart for including the “white nationalist” voices that some have begun calling “alt-right” conservatives.

But Breitbart News itself touted the praise that veteran conservative leaders like direct-mail pioneer Richard Viguerie have for Bannon. Viguerie is quoted saying that Bannon “will do more than balance” the mainstream Republicans likely to join the Trump White House. It is the GOP social conservatives’ fear of “RINO” (“Republican In Name Only”) penetration of the Trump administration that has so many cheering for Bannon as a longtime “street fighter” foe of Republican moderates.

Fox News reports that Priebus said of Bannon: “He was a force for good on the campaign. … I haven't seen any of these things that people are crying out about. … It's a good team, it works.”

Among Bannon’ strongest critics is the far-left Southern Poverty Law Center, which is loathed by conservatives of various stripes for spuriously labeling pro-family groups like American Family Association “hate groups.”

Marjorie Dannenfelser, president of the pro-life organization Susan B. Anthony List, heaped praise upon Priebus for his pro-life credentials:

Personnel is policy, and President-elect Donald Trump has once again solidified his commitment to the pro-life cause by naming Reince Priebus as his White House Chief of Staff. I first got to know Reince when I interviewed all the candidates for RNC chairman on the issue of Life. He articulated that the pro-life cause “is woven in my heart, it's something I believe in.”

In 2014, Priebus led the RNC as it officially participated in the March for Life for the first time ever in the Party's history. I was proud to march side by side with him in solidarity with hundreds of thousands of pro-life Americans, and because of his leadership SBA List presented him with its Distinguished Leader Award in 2015. Under his RNC tenure, the GOP has passed several groundbreaking pro-life resolutions, and ratified the strongest pro-life platform in the Party's history at the 2016 convention. I look forward to working together with Reince Priebus to implement President-elect Trump's pro-life agenda.

However, Priebus is not without his critics. Some Tea Party leaders criticized him as a “Washington insider.” Ed Martin, president of Phyllis Schlafly’s Eagle Forum Fund, recalled Priebus’ and the RNC’s “Autopsy for the Republican Party,” which attempted to assess what went wrong with Mitt Romney’s failed 2012 presidential bid. Martin quoted an article by the late Schlafly dated March 27, 2013, that reads in part:

The Autopsy included a lot of chatter about ‘growth’ and ‘opportunity,’ plus 30 mentions of the need to be more ‘inclusive,’ but that warm and fuzzy invitational language didn’t extend to those who want to do something so daring as to nominate conservative candidates who aren’t afraid to talk about the right to life and traditional marriage …

The Autopsy fails to encourage a commitment to traditional Republican principles, such as marriage and military superiority, which are all clearly enunciated in the national Republican Platform adopted in Tampa last year. Some have forgotten that Ronald Reagan advised us to run on a platform of “bold colors with no pastel shades.”