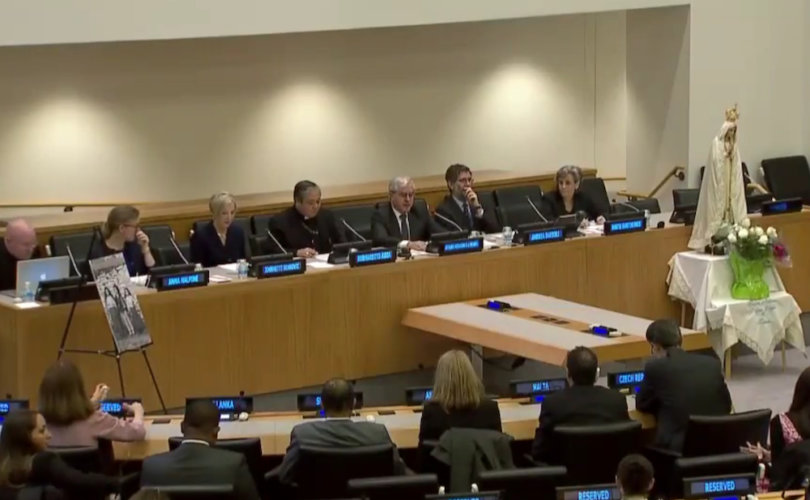 UNITED NATIONS, New York, May 12, 2017 (LifeSiteNews) — The United Nations must pay attention to “children in the womb,” a pro-life advocate told a UN official at a Friday panel on Fatima.

Stefano Gennarini’s comment to Marta Santos Pais, UN special representative for the secretary-general on violence against children, triggered a burst of spontaneous applause from the 550-plus people packing the auditorium.

“So my plea especially to Marta Santos is that let’s pay attention to also children in the womb,” said Gennarini, who is with the Center for Family and Human Rights (C-Fam).

“They also cry, they also feel pain, their heart is beating. We also need to pay attention to them, and cry for them.”

The Portuguese Santos Pais was one of several panelists at the Fatima event, co-sponsored by the UN Holy See and Portugal missions.

It marked May 13, the day the Virgin Mary first appeared to three shepherd children in Fatima, Portugal, in 1917.

On Saturday, Pope Francis will be in Fatima to canonize two of the three visionaries, Jacinta and Francisco Marto, who were seven and nine years of age when Our Lady appeared to them and their cousin, Lucia Santos.

Over six monthly apparitions, she asked the children to fast and pray for the conversion of sinners, and foretold catastrophic events, including the Russian Bolshevik revolution and World War II.

Johnnette Benkovic of Women of Grace on EWTN was also on the panel, which discussed the “enduring relevance” of Fatima’s “message of peace.”

Benkovic mentioned Mother Teresa when explaining the “genius of women” to bring peace.

“I also want to thank Johnnette for bringing in Mother Teresa,” Gennarini said in the question period.

Mother Teresa “spoke of a powerful message of peace,” he said.

“She would always say, including here at the United Nations, that the greater destroyer of peace in the world today is abortion.”

In her talk, Santos Pais lauded the UN’s Sustainable Development Goals but didn’t mention these include the promotion of “sexual and reproductive health and rights.”

In order to free children from violence, it was necessary “to have safe, inclusive, relevant and empowering quality education,” and to invest in “creating protection services and institutions and awareness in society that can help to enhance in achieving such a goal,” Santos Pais said.

Gennarini spoke about the importance of Fatima for those in pro-life apostolate.

“The last we learnt about the message of Fatima from Sister Lucia was in a letter handwritten to Cardinal [Carlo] Caffarra,” which is in the Vatican archives, he said.

Sr. Lucia wrote “that the final battle between the Lord and the reign of Satan will be about marriage and the family.”

Lucia added, “encouraging us all, don’t be afraid,” Gennarini  said. “Because anyone who works for the sanctity of marriage and the family will alway be fought and opposed in every way, because this is the decisive issue.”

Her letter “concludes, however, Our Lady has already crushed its head,” Gennarini said.

“I just thought this was a very encouraging message for all of us.”