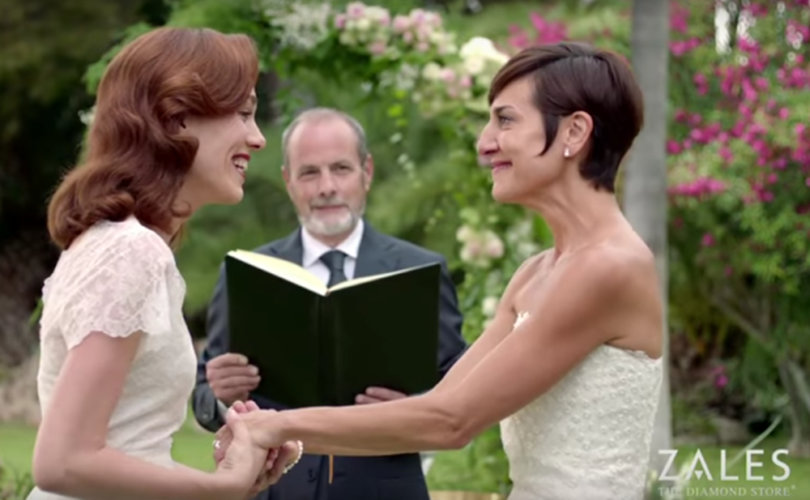 November 28, 2016 (LifeSiteNews) — The pro-family group One Million Moms is calling on its followers to urge Zales Jewelers to get out of the homosexual “marriage” business and to stop “normalizing sin” by pulling its commercial featuring a lesbian “wedding.”

One Million Moms (OMM), a division of American Family Association, is asking Zales to “remain neutral in the culture war.” You can view Zales’ homosexual “Love and Pride” LGBTQ collection HERE.

OMM said in a statement:

“Zales Jewelers should be ashamed of attempting to normalize sin by featuring two women getting married in their latest commercial. It shows two women in wedding gowns exchanging vows and wedding bands. Zales is promoting same-sex ‘marriage’ and their new “Love and Pride” Collection. The “Love and Pride” wedding band collection, designed for the LGBTQ community with rainbow and matching bands, is “promoting Equality, Diversity, and Unity” and ‘celebrate their Love with Pride’ as stated on their website.

“Zales is using public airwaves to subject families to the decay of morals and values, and belittle the sanctity of marriage in an attempt to redefine marriage. Even though homosexuality is unnatural, this advertisement is pushing the LGBTQ agenda. An even greater concern is that the commercial is airing when children are likely watching television.”

It appears that Zales has strayed far from its more wholesome origins in 1924 in Wichita Falls, Texas. The ad in question shows several male-female couples — and one lesbian couple (each in wedding dresses) — getting “married” in what would otherwise be a normal ceremony. OMM said the ad “has aired during family viewing time such as football games and prime-time shows.”

One Million Moms is also encouraging its followers to continue boycotting Target stores, due in part to the retail giant’s “transgender” restroom policy allowing men and women to use opposite-sex restrooms and changing rooms. More than a million people have signed AFA’s petition to boycott Target, which has affected its bottom line.