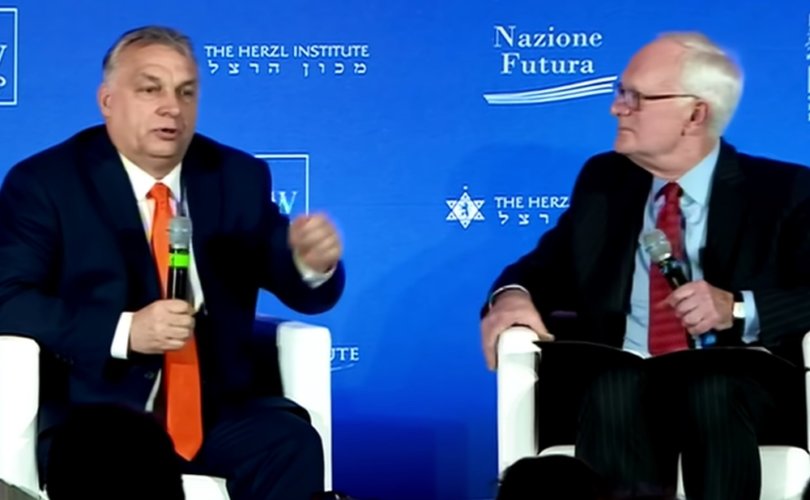 February 11, 2020 (LifeSiteNews) – Hungarian Prime Minister, Viktor Orbán, told a conservative conference in Rome last week that “the universal Catholic approach” is the only one “which appreciates and accepts national sovereignty.”

Orbán made his comments during an address given to the National Conservativism Conference in Rome on February 4. In a wide-ranging speech, he spoke about his core anti-Marxist political principles, the impact of Muslim migration to Europe, the reasons for Hungary’s economic success and the relationship between national identity and conservative politics.

Orbán has said in the past that “Christianity is Europe's last hope”. He has a strong history of promoting pro-family policies in Hungary and has not been afraid to stand-up to anti-life globalists such as George Soros.

In his speech last week, Orbán highlighted the roles played by former US President Ronald Reagan and Pope John Paul II in overcoming the Soviet Union and defending the nations of Central Europe.

Orbán said that his generation in Hungary considered Reagan as “the liberator of our personal life”. He said that Reagan had “changed the world” by changing his strategy during the Cold War from one where “the target was not to win, just to peacefully coexist”, to one that can be summarized by the sentence: “We win, they lose.” Orbán said that Reagan’s change in strategy resulted in “the captive nations”, such as Hungary, becoming “free again.”

“Without Ronald Reagan,” he said, “there would have been no chance to push the Russians, the Soviet Union out of Central Europe and to get rid of communism.”

Although himself a Calvinist, he also singled out Pope John Paul II for his role in defending people in Central European nations from the Soviets. “We never considered the Holy Father as a Catholic leader of the Vatican,” he said. “We always considered him as the biggest defender of Central European countries on the world stage, whatever their religious background.”

Orbán explained that as young men he and his friends had not wished or intended to enter politics, but that they did so in 1988 because they realized that the Soviet Union’s structure and the communist regime was not strong enough to survive, and so they thought “now this is the right moment to do something.”

They founded, in his words, a “radical anti-communist” party, which initially had an upper age limit of 35, due to what Orbán describes as the older generation’s tendency to “make some compromises on communist thinking and communist politics.” That upper age limit for members was later removed.

He says that from its founding, his party was not just anti-communist in terms of national independence against the Soviet Union, but that they stood “against the communist way of thinking, the Marxists way of thinking which is still going on, you know.”

“The liberal professors and politicians argue by using different words but meaning the same thing, you know, as the Marxists speak,” he added. “That is the reason why we feel that we are still the same anti-communist radical politicians as we were 30 years ago, fighting the same battle. That is the point.”

A Europe of sovereign nations

Orbán explained that in his view there are two competing views of Europe. One he identified as “federalist, empire-oriented approach” which wants to “build Europe from above” and which “wouldn’t like to have sovereign states.”

The other vision, the vision he insists upon, is what he describes as “building Europe from the bottom”, which he says means “respecting national sovereignty and finding a way for sovereign nations to cooperate in order to find the common interest of the European nations.”

He describes Hungary as a “Christian democracy” and says that Hungary has chosen “Christian liberty” instead of “liberal freedom.”

“It is very unique, nobody likes it outside Hungary,” he says. “The liberal press is always attacking us, making jokes of us, but it works. And the people vote for it again and again and again. This is my approach, and that’s the reason why I believe in Christian democracy.”

Interestingly, Orbán noted the significance of what he calls “the universal Catholic approach” in shaping his political thinking. He said that in building up sovereign nations “we have to resist the attempts to build an empire” and that “the universal Catholic approach” is “the only one which appreciates and accepts national sovereignty. It is a global idea but considers sovereign states valuable.”

The reality of Muslim migration in Europe

Orbán explained that in Hungary they have “Muslim migrants that amount to zero. So we don’t have any.”

He contrasted this with the demographic make-up of western European nations, saying that “it is pure mathematics to understand where the western countries will develop in terms of demography and composition of their societies.”

“Mathematics is a very severe thing,” he continued. “It is obvious that they will create, will develop or evolve a society which will be a composition of a big Muslim community which is growing and a Christian community which is decreasing. That is how the Western countries will look like, whether we like it or not. It is not a wish, it is not a critique, it is a description, you know, of what is going on, not just because of the migration crisis in 2015 but because of the previous 30 years as they understood the whole issue of migration, and because of the poor performance of families, in terms of reproduction of their nations in many countries.”

He said that, as a result of this, many European countries are seeing “a new type of society consisting of a decreasing Christian element and an increasing Muslim element.”

Orbán said that it was not his job to convince other nations to adopt different immigration policies, but stated his hope that other nations would not attempt to “force us to follow the same track.”

He observed that “the migration issue is a good cause for Christian democrats and national conservatives to explain again to the people what is at stake, what is really important, and how we imagine the future.”

He said that because of the starkly different approach being taken between liberal democracies in western Europe and Christian democracies in central and eastern Europe that there was a real possibility that “in 20 years’ time Europe will show a different picture on the Western part, on a civilizational basis, and on the Eastern part” and that would mean it would become “difficult to answer how we can cooperate if we became so different.”

Leading the fight against “mainstream liberalism”

When asked directly by his interviewer about Hungary’s “pro-natalist policy” and whether this meant he had “serious or big ambitions?” Orbán initially responded briefly, simply saying “Don’t worry.”

When pressed further he said the role that Hungary has been playing of leading the “fight against the liberal mainstream is not the job of small countries.” He said that the simple reason they have played that role is “because there is nobody else” but said that he hopes that bigger countries, such as Italy or Spain, “will take the same flag and take the role away from us, or join us in leading that fight.”

LifeSite spoke today with Dr. Imre Téglásy, leader of Human Life International (HLI) in Hungary and one of the abortion survivors featured in the new pro-life ad “Faces of Choice” which premiered at the recent March for Life and was blocked from being aired during the recent Super Bowl.

Téglásy told LifeSite that, in his view, “Viktor Orbán is the greatest politician of the last three decades in Hungary.”

He said Orbán has “recognized the challenge of this crisis caused by the “demographic winter,” which means that Europe is underpopulated due to parents refusing to have families or making certain that they do not have a family by means of contraception and abortion.

Téglásy noted that when Orbán came to power the fertility rate was tragically low in Hungary (1.28 children per family) and that this meant “the soon extinction of the whole nation.”  Téglásy said that Orbán has initiated “lots of incentives to promote the idea of ‘Making Families Great again.’”

After an age of feminist liberation, Orbán’s government was courageous enough to make women free, as well as affirming them in their God-given vocation to become mothers and glorious with their children.