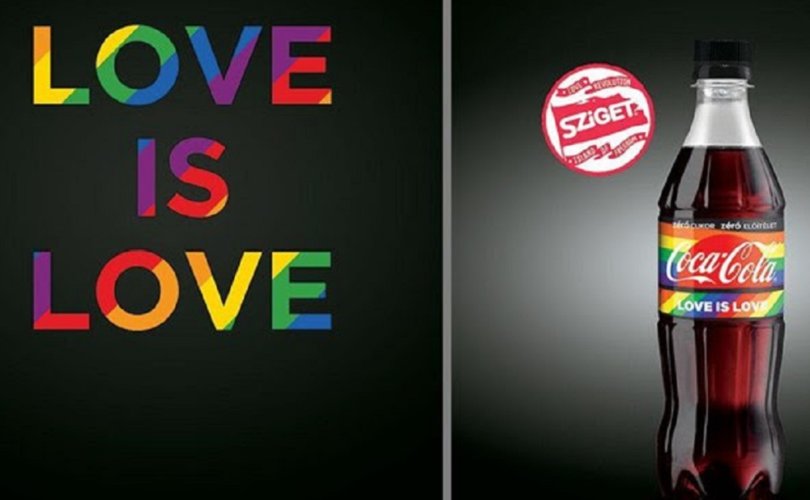 BUDAPEST, August 19, 2019 (LifeSiteNews) — Advocates for marriage and family in Budapest, Hungary, netted an apparent partial victory this week, a report says, after pushing back against controversial pro-LGBT advertisements placed in public locations throughout the Hungarian capital by multinational corporation Coca-Cola.

Provocative and suggestive photos of same-sex couples closely sharing a Coke, along with rainbow-themed advertising stating, “Love is love” and containing slogans such as “Zero Sugar, Zero Prejudice,” were displayed in Coca-Cola ads beginning earlier this month in train stations and at bus stops in Budapest.

The ad campaign coincided with the week-long Sziget music festival, held each year in early August in northern Budapest and expected to draw more than half a million people.

A petition established August 2 by CitizenGO Hungary went viral, according to the petition platform’s associated online family advocacy site HazteOir, and had more than 41,000 signatures by press time. It came amid varied individual calls to boycott Coke for the ads.

The partial win came in the form of Coke replacing the posters containing same-sex couples with the LGBT-affirming “Love is love” campaign, the report said.

This was a “semi-victory,” said Eszter Zaymus, CitizenGO campaign director for Hungary.

Zaymus urged continuing with a boycott of the Coca-Cola brand, the HazteOir report said, since “they are not stopping the display of messages that promote homosexuality.”

LifeSiteNews inquired Coca-Cola for confirmation of the corporation’s amending of its Budapest LGBT campaign and for comment on the matter and did not hear back by press time.

The CitizenGO petition said Hungary protects the institution of marriage as being between a man and a woman and also that the family is fundamental to the nation’s survival.

It urged the mayor of Budapest and other authorities “to keep the phenomenon of homosexual lobbying within limits so as not to jeopardize public morals” and expressed particular concern over the exposure of young people to the campaign.

The petition called for withdrawal of Coke’s LGBT ads because “[t]he homosexual content advertised on the posters threatens public morals, as homosexual relationships run counter to natural moral law, and the family as the basis for the nation’s survival.”

It also touched on the right of parents to determine when and how to teach children about certain human relationships.

“Just as a young person or child under the age of 18 cannot enter the tobacco shops, they will be warned on television if the content is not intended for children,” it said. “This allows parents to turn off the broadcast.”

“Walking around the city, however,” the petition continued, “will make it impossible for them to protect their children from content that is [imposing] homosexuality.”

On August 4, Boldog István, deputy speaker for Fidesz, the political party of Hungarian prime minister Viktor Orbán, called for a boycott of Coca-Cola.

“I reject the Coca Cola poster campaign,” Orbán said on Facebook. “Until your provocative posters are removed from Hungary, I will not drink your products. This is what I ask everyone.”

A Church Militant (C.M.) report included video of conservative citizens pushing back against the campaign with leaflets and stickers questioning, in light of the “Love is love” LGBT campaign, whether acceptance of pedophilia would be the next step.

The conservative party Mi Hazánk (Our Country) also conducted a demonstration outside the company’s headquarters in Dunaharaszti on August 13, the C.M. report said, calling for a boycott and dumping Coca-Cola onto the ground.

Hungary’s government has been supportive of the family and marriage in policy.

In May, speaker of the Hungarian Parliament László Kövér stirred controversy by equating adoption by gay couples with pedophilia, C.M. reports.

Orbán’s chief of staff, Gergely Gulyás, said when asked to comment on to Kövér’s remarks:

I can only find a parallel in one aspect: In both cases [pedophilia and adoption by LGBT couples], the interests of the child remain in the background and the focus is on the interests of the adopters who are, by the way, incapable of having a child of their own. I think this is factually correct.

Budapest’s public transport company BKV had declined to get involved in the Coca-Cola LGBT ad controversy, issuing a statement that said third parties were responsible for their use of its advertising space in the public spaces involved.

Coke had issued a statement standing by its LGBT campaign in the initial days of calls for a boycott, CNN reports.

“The Coca-Cola Company strives for diversity, inclusion and equality in our business, and we support these rights in society as well,” a company representative said in the statement. “As a long-standing supporter of the LGBTQI community, we believe everyone has the right to love the person they choose. The campaign currently running in Hungary reflects these values.”