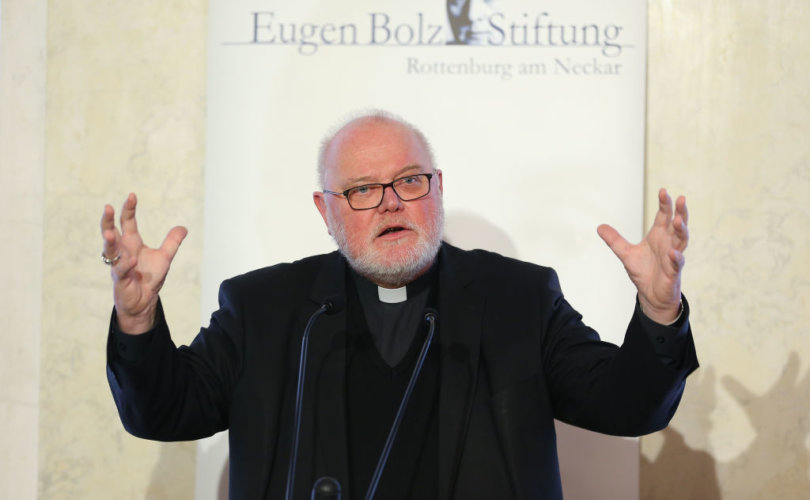 Editor's note: The following address was given by LifeSiteNews’ editor-in-chief  John-Henry Westen at the Acies ordinata prayer and protest event in Munich, Germany on January 18, 2020.

January 21, 2020 (LifeSiteNews) – Your Eminence, Cardinal Reinhard Marx, with respect and love for your office as a bishop and cardinal, as a pastor called to feed the flock of Christ, it is with great sorrow that I must now speak very strongly to you. I do this as a father of young children, as a member of the lay faithful whose love and concern for his own children and those of others does not allow me to keep silent. On too many occasions recently we have lacked the charity and courage necessary to speak challenging words to our pastors, so that worse evils might be avoided. And so I say….

Cardinal Marx, in the words of St. Paul, you have blood on your hands.

Cardinal Reinhard Marx you have shown yourself to be a wolf, like those prophesied by the Apostle Paul who come to devour the sheep by speaking twisted things and drawing away disciples after them. (Acts 20:29-30) In his letter to the Corinthians, St Paul called pastors like you false apostles, deceitful workmen, disguising yourself as an apostle of Christ. (2 Corinthians 11:13)

Your false teaching on abortion, adultery and homosexual acts have perverted a whole generation of Catholic young people. Many of them now go on to practice abominable acts which cry out to heaven for vengeance, which will imperil their souls and make them suffer in their bodies too, all because you want to twist the truth of Christ for your own benefit.

You want to rub shoulders with the elite of this world. You talk about helping the poor and yet you spent over 20 million US dollars renovating your residences in Munich and Rome. You speak of care for those with homosexual orientation yet you encourage the very behaviours that you know lead to AIDS and other deadly diseases and worse than that to the loss of eternal salvation. Their blood is on your hands.

How dare you give a blessing to acts which harm people in their bodies and souls?

You are a false prophet like those warned against by St. Peter the first Pope. He said those like you would secretly bring in destructive heresies and that many would follow your sensuality and blaspheme the way of truth. (2 Peter 2:1-2)

Repent of your evil for the fire of hell awaits you. Our Lord warned you that it would be better for you that a millstone be tied about your neck and you be thrown into the sea. (Mark 9:42)

How dare you call yourself a Catholic. You have said you don’t want to be a subsidiary of Rome and that Germany would follow its own so-called synodal path. You know full well there is one body and Spirit in the Church, there is only one Lord, one faith and one baptism because there is one God and Father of us all. (Eph. 4:4-6)

How dare you profess to be a faithful follower of Christ, when you reject His plan for human sexuality and attempt to bring the spirit of fornication into the Church?

All of your brothers in the clergy in Germany should know that in following your heresy they are betraying Christ. Let all the faithful clergy in Germany reject your heresies and fight the good fight and keep the true faith so that the righteous Judge will reward them. (2 Tim 4:7)

You continue to support and give Holy Communion to Catholic politicians who support abortion, yet when a faithful Catholic stops giving you money from income tax then you refuse them the sacraments.

You have presented people with a false Christ and a false gospel. We reject it, and cling to the One, Holy Catholic and Apostolic Church which preaches sound doctrine in season and out of season, even when it goes against what the world wants to hear. (2 Tim 4:2)

And yet even now after all the harm that you’ve caused our beloved Church and our children we hope and pray for your conversion. You still have time to return to the way of Christ before meeting the just judge. (1 Pet 4:17-18)

Cardinal Marx, hear now the words of Christ: Repent, and believe in the Gospel! The true Gospel.

Until you do repent however, we will urge Catholics to shun you and ignore your teaching. Luther used horrible words to falsely describe the epistle of St. James calling it ‘not worthy of an apostle’ but those words with all their horror describe perfectly your actions.