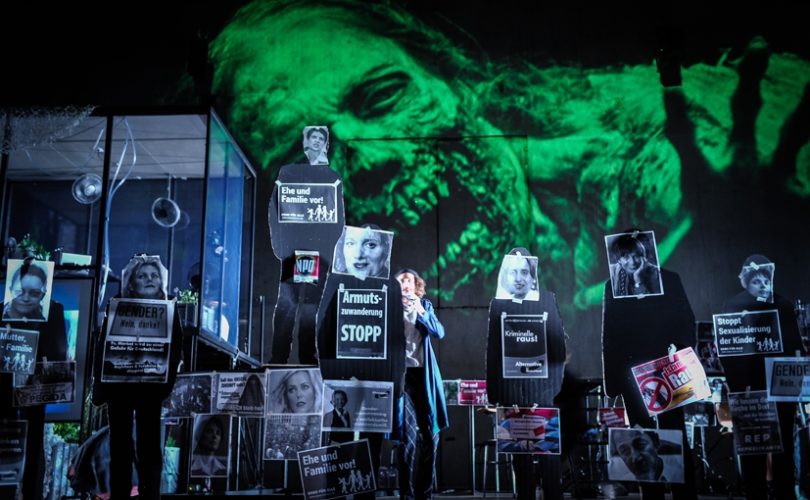 A shot from the play "Fear," by homosexual Falk Richter.

BERLIN, November 20, 2015 (LifeSiteNews) — Five defenders of marriage and family in Germany were portrayed in a Berlin theater last month as zombies that can only die by receiving a bullet to the head. Within hours of the premiere, one of the women portrayed had her vehicle torched and destroyed by arsonists. A week after that, another woman portrayed also had her vehicle torched, with the fire spreading to her pro-family business, gutting it completely.

“The battle for life and the family is moving to a new stage, as attacks start to shift from verbal to physical,” said Gabriele Kuby, one of the women portrayed in the play, to LifeSiteNews.

On October 24, Berlin theater Schaubühne premiered “Fear,” a play by homosexual Falk Richter that literally demonizes what he calls “proponents of simplistic world views” who advocate for defining what it “means to be a man, a woman or a family…in the most one- dimensional terms.”

In “Fear,” actors appear on stage wearing facial blowups of pro-family activists taped to their heads. They read portions of speeches given by the people they represent, which are then mocked and derided. At various points in the play, the pro-family activists are portrayed as Nazis as well as zombies risen from the grave. At another point, actors viciously poke out the eyes from the images of the protagonists, leaving gaping black sockets.

“The battle for life and the family is moving to a new stage, as attacks start to shift from verbal to physical.”

An actor tells the audience at one point: “The zombie dies only when you shoot directly into his brain and his brain dies. That's the only way. The zombie seeks world domination. The zombie is directed against the survival of humanity. He is the undead.”

Germany’s homosexual magazine Männer said the title of the play is meant to ridicule those who fear to embrace the changing moral and cultural landscape where homosexuality, transgenderism, and multiculturalism is all the rage. “[Their views] are nothing else but homophobia,” a writer in the magazine stated.

Hours after the premiere, on October 25 near midnight, pro-family politician Beatrix von Storch became the first victim of an arson attack on her car.

Then, one week later, arsonists torched the van of traditional-family advocate Hedwig von Beverfoerde. The fire spread to the nearby headquarters of her family’s business, completely destroying it.

Von Beverfoerde connected the attack to the Berlin Theater.

“It’s striking that this insidious attack from the extreme left-wing milieu happened only a few days after the premiere of the play ‘Fear’ at the Schaubühne in Berlin,” she posted on Facebook November 2.

Von Beverfoerde said she would not be so easily dissuaded from continuing her demonstrations on behalf of protecting children’s innocence.

“Demo For All cannot be burned down. Our commitment to marriage and family is unchanged,” she said.

When German Catholic blogger and philosopher Dr. Josef Bordat reported and commented on the arson attacks, he received several death threats, forcing him to suspend his blog out of fear of assault.

“Their ready use of force seems virtually limitless. The complete, even physical, destruction of their enemy is the goal they want to achieve,” Bordat wrote on Facebook.

But the play’s director called it “absurd” for people to make a connection between the play and the subsequent acts of violence against the individuals it depicts, stating in an opinion piece posted on the theater’s website earlier this month that the production merely “explores in a satirical way what are the right-wing nationalist and religious fundamentalist currents in today's Germany.”

But “gender ideology” critic Gabriele Kuby thinks otherwise. “The entire play is simply a mad incitement to hatred and violence,” she told LifeSiteNews. “We are portrayed as zombies and as dangerous, hateful Nazis. People are told how to shoot zombies in the head. And now there is physical violence — putting cars on fire — against people working to protect the family,” she said.

Kuby said that lawyers are investigating the theater for possible charges involving slander. In the meantime, “Fear” is scheduled to run again in January.