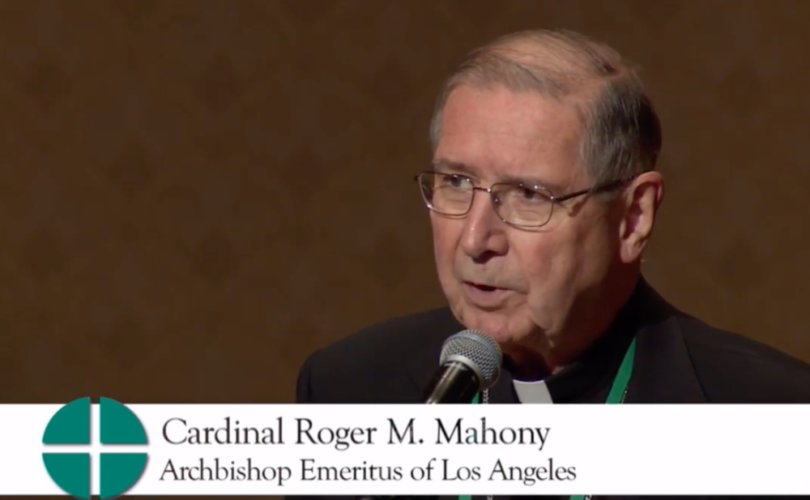 LAKE CHARLES, Louisiana, February 4, 2019 (LifeSiteNews) – A pro-family organization has launched a petition asking Cardinal Roger Mahony, infamous for covering up child sexual abuse by his clergy, to withdraw as a speaker at the upcoming Los Angeles Religious Education Congress.

The retired archbishop is invited to speak at the Catholic conference that is taking place March 22-24. The topic of his March 23rd address will be “Connecting Junior High and High School Students with the Volatile Immigration Issues.”

The Ruth Institute, an inter-faith pro-family organization combatting the Sexual Revolution and clerical sex abuse, launched the petition at CitizenGo. The petition currently has over 650 signatures.

Dr. Jennifer Roback Morse, the president of the Ruth Institute, told LifeSiteNews that Mahony represents what's wrong with the church's handling of the abuse crisis and should not be addressing Catholic conferences, no matter how pious his topic might be.

“I don't care if he's teaching children the Hail Mary. The subject of his talk is not the issue. He's a symbol of all the wrong things and he shouldn't be there,” she said.

Morse said the petition was inspired by a combination of issues.

“The clergy sex abuse issue has been gnawing at me all summer, and then there’s Mahoney’s history, and the L.A. Religious Education Congress – all coming together,” she said.

Cardinal Mahony and the L.A. Archdiocese have been embroiled in a scandal for years surrounding the cover-up of clerical sexual abuse and transfer of abusers to other locations. The archdiocese has been forced to pay out $600 million in settlements.

Morse is concerned for the effect Cardinal Mahony’s appearance at the Conference will have on survivors of clerical sexual abuse.

“People who have suffered childhood sexual abuse are triggered,” she said.  “They are triggered by a person like Mahony.”

“It is so utterly clueless to give such a guy a platform,” she continued.  “It’s not like this Congress has to have him. What are they even thinking?”

Morse said that the immediate inspiration, however, was Catholic writer Joseph Sciambra’s article, which was republished by LifeSiteNews, about Mahony’s appearance at the 2019 conference.

“You know, this has got to stop,” said Morse.

The scandal arising from revelations of Mahoney’s bad management when he oversaw the archdiocese led Archbishop Jose Gomez to relieve the Cardinal of all administrative and public duties in 2013. Nevertheless, the Cardinal has accepted invitations to speak – and then rescinded after vociferous protest from outraged Catholics.

“We all thought Archbishop Gomez asked him not to appear publicly,” Morse said. “This has happened on two other occasions, and he didn’t appear.”

Whether Cardinal Mahony withdraws of his own volition or is disinvited is not the point.

“If he wants to save face by saying he doesn’t want to come, that’s fine with me,” Morse stated. “He should have the common sense and decency to see that his presence there is an affront to survivors of sexual abuse.”

Withdrawing, she said, “is a classy thing that he should do.”

In a press release, Dr. Morse concluded: “Your Eminence, with all due respect to your office, show some class. Stay home from the Religious Education Congress. Your presence will be hurtful to people who have already suffered enough.”

The Ruth Institute is a global non-profit organization dedicated to fighting the Sexual Revolution and helping survivors to heal. It defends the family at home and in the public square and equips others to do the same.

The petition asking Cardinal Mahony to withdraw from the L.A. Congress can be found here.