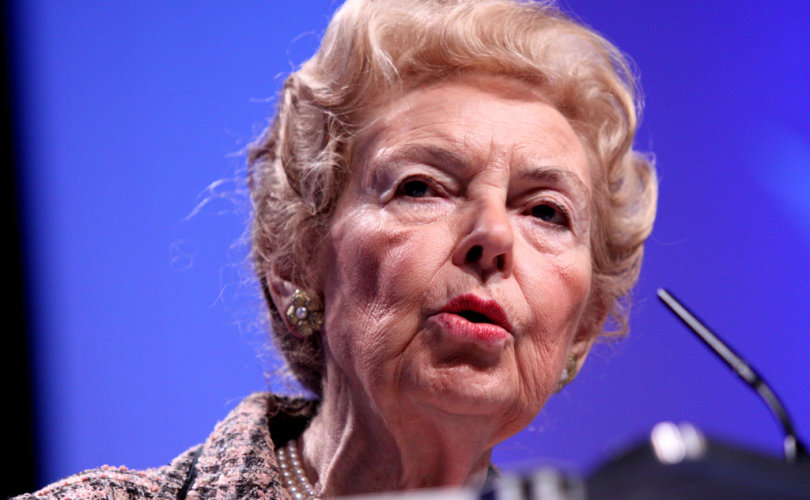 September 6, 2016 (LifeSiteNews) — Pro-life and pro-family activist Phyllis Schlafly, who prevented the passage of the misleadingly-named Equal Rights Amendment (ERA) in the 1970s and 1980s and founded Eagle Forum, died Monday at 92.

Schlafly was one of the pioneers of the modern pro-life and pro-family movements. She organized a successful political movement against the ERA when it seemed inevitable that the constitutional amendment, which likely would have forced women to enlist in the draft and enshrined abortion into the Constitution, would pass.

Schlafly died of cancer in her St. Louis, Missouri, home surrounded by her family.

“Phyllis is the reason the Republican Party is a pro-life party,” said Kristan Hawkins, the President of Students for Life of America. Schlafly “inspired millions to the fight against abortion and the disastrous Equal Rights Amendment which would have made abortion a constitutional right.”

“Phyllis Schlafly will be remembered for her courageous leadership in the face of seemingly insurmountable odds,” said Tony Perkins, president of the Family Research Council. “With the political establishment, the media, and academia all arrayed against her, she organized a grassroots movement that not only stopped the Equal Rights Amendment (ERA) but became the foundation for the pro-life, pro-family movement we have today.”

Her most recent notable action was endorsing Donald Trump for president. “We've been following the losers for so long — now we've got a guy who's going to lead us to victory,” Schlafly said in March.

“I was honored to spend time with her during this campaign as she waged one more great battle for national sovereignty,” Trump said in a statement.

Schlafly was the author of 27 books, including A Choice, Not an Echo, The Flipside of Feminism: What Conservative Women Know — and Men Can’t Say, and No Higher Power: Obama’s War on Religious Freedom.