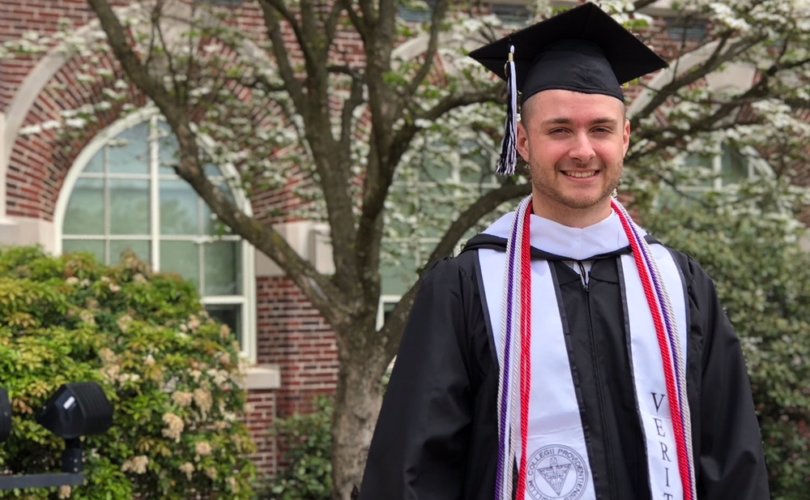 PROVIDENCE, Rhode Island, May 23, 2018 (LifeSiteNews) – The student who was threatened with rape for articulating Catholic teaching on marriage at Providence College graduated this weekend, and was then banned from campus and served a restraining order. This happened after he reported to the school being threatened with murder and subsequently confronted an administrator about her inaction.

“First rape, now death,” the now-graduate, Michael Smalanskas, told LifeSiteNews. His being banned from campus means he is losing wages because he can no longer report to work at the on-campus Barnes and Noble, where he planned to continue working this summer.

The school’s Vice President of Student Affairs, Kristine Goodwin, obtained a restraining order against Smalanskas. The two have a history – it was Goodwin who encouraged students to participate in a march against “homophobia” after Smalanskas put up a bulletin board defending marriage.

Goodwin now claims Smalanskas “glared at me for 5-10 seconds” after exiting “the line for communion” during the school’s commencement Mass on May 19. According to her official statement, she views that, and the following, as threatening:

“He is significantly larger and younger than me and he has, on multiple occasions, used his physical stance, glaring eye contact, and verbal confrontations to impose fear,” she claims.

Goodwin admits Smalanskas has never actually threatened her. But when Smalanskas spoke with her about her inaction, “he seemed out of control” and Goodwin thinks he “lacked any judgement about the scene he created…While his words were not expressly threatening his actions toward me have escalated quickly.”

Smalanskas, who is getting married on campus in July, is allowed on campus for wedding-related business, but must give two to three days’ notice so that Goodwin can work from home when he is there.

Providence College (PC) is run by the Dominican order’s Province of St. Joseph.

“A civil restraining order was issued by the court after Mr. Smalanskas’ unacceptable conduct toward a member of our community on campus this past weekend,” Steven Maurano, PC’s Associate Vice President for Public Affairs, Community & Government Relations, told LifeSiteNews. “Because of the serious nature of his actions, the College has restricted his access to campus.”

LifeSiteNews asked what the unacceptable behavior was, to which Maurano responded, “A court would not issue a civil restraining order, nor would a college restrict someone’s access to campus, without sufficient cause.”

Smalanskas: Student threatened to ‘stab’ and ‘murder’ me for supporting man-woman marriage

Smalanskas told LifeSiteNews that the latest drama with the school began to unfold on the evening of Thursday, May 17. Smalanskas and his fiancée were at Providence College’s senior formal at Foxwoods Casino in Connecticut. Because they’d bought tickets late, they were seated with people they didn’t know.

One of their tablemates pulled Smalanskas aside to talk to him about the bulletin board incident, he told LifeSiteNews. Then another student who wasn’t originally at their table “immediately launched into threatening to murder me.”

“The word choice was ‘murder’…he persistently asked for my home address because” he said he wanted to “find me after graduation and stab me.”

By means of this email, you are being made aware that a threat was made against my life at the senior formal last evening at Foxwoods Casino in connection with the bulletin board incident. A student told me that he wanted to murder me for putting up the poster about marriage. An internal report has been filed with Public Safety and I have advised them to pursue an external criminal report with the proper jurisdiction.

Let me make myself clear: the College has had every opportunity to stop and prevent this kind of behavior, which has included rape threats and now murder threats. Your inaction throughout this incident has ennobled students to act this way. Every one of you is personally responsible for creating this environment.

The two students involved in this matter have been identified and I demand that they be barred from walking at our commencement exercises.

On behalf of everyone on this message I am responding to your email to acknowledge receipt and to assure you that Public Safety is, as you know, investigating your report.  My understanding is that Director Kanadanian offered to escort you to meet with the appropriate law enforcement authority in order to file a report, but that you prefer that he send the report.  I have also been told that a no contact directive was issued. Once completed Public Safety will forward the report to the Office of Community Standards for review. In the meantime, if I or others can be of assistance please do not hesitate to let us know.

Veneris did not respond to a request for comment by press time.

The school “ignored” the report of a murder threat and there were “no consequences for those guys,” Smalanskas told LifeSiteNews.

After commencement Mass, a confrontation that snowballed

Both Smalanskas and Goodwin agree that after the commencement Mass on May 19, Smalanskas said to Goodwin something to the effect of “you should be ashamed of yourself. They threatened to rape and murder me and you did nothing.”

Smalanskas almost wasn’t allowed to walk at the May 20 graduation ceremony over this, but was permitted to after the school assigned Goodwin a personal bodyguard for the duration of the day. Providence College ordered Smalanskas to make no contact with Goodwin.

“I was also informed there would be non-uniformed officers in place ready to haul me out if I pulled anything,” Smalanskas told LifeSiteNews.

In her request for a restraining order, Goodwin outlined two encounters with Smalanskas that she says prove a pattern of animosity toward her:

Incident one: During the commencement mass as Mr. Smalanskas exited the line for communion he stopped approximately 10 feet away from me and glared at me for 5-8 seconds. He was visibly angry and stared at me causing me to feel surprised, uncomfortable, and afraid as to what he might do next. I was afraid enough to tell my colleague next to me and ask my husband to meet me to escort me after mass . I was afraid and intimidated because of his facial expression, the length of his stare, and the venue[ . One witness, a faculty member, reported “I am still shaken by his anger and hate yesterday.”

Incident two: As I exited mass it appeared that Mr. Smalanskas was waiting for me. As soon as he spotted me he began yelling my name louder and louder. He yelled something to the effect “You should be ashamed of yourself Kristine Goodwin, Kristine Goodwin – they threatened to rape and murder me and you did nothing Kristine Goodwin.” The area was very crowded and I had a difficult time getting away from him through the crowd. He got louder and louder either by walking closer and following me or yelling louder. I was more fearful for my physical safety than I have ever been. He seemed out of control and lacked any judgement about the scene he created. I went to a secure location and called for help. While his words were not expressly threatening his actions toward me have escalated quickly.

It was these accounts, combined with the rest of Goodwin’s statement (available in the PDF below), that allowed her to receive a civil restraining order against Smalanskas and get him barred from campus after graduation.

“It’s ridiculous to think that making eye contact with somebody on the way back from Communion and simply expressing that her inaction [is a] disgrace would constitute those kinds of penalties,” said Smalanskas.

“The great…irony here is that I was actually threatened with credible threats of rape and murder, and [Goodwin] personally said, you know, the college will process this later, but she claims falsely that she is threatened” and then “gets a bodyguard, gets a no-contact order, gets a restraining order, and then bars me from campus.”

“It seems that this has to be revenge,” he said. It’s “clear” that she has demonstrated “a pattern of revenge behavior” against me.

Smalanskas will have to go to a court hearing in 10 days “and that is my opportunity to give my side and let the court determine if they’ll extend [the restraining order] or drop it.”

Goodwin also wrote that she is afraid because Smalanskas’s father “has access to weapons.”

“She leaves it there but fails to mention he has this access because he is an officer of the law and has been for 32 years with a spotless record,” Smalanskas responded.

It was Goodwin’s decision “to wait until after graduation to investigate Michael’s allegation that a fellow senior had threatened to murder him for his support of traditional marriage,” said Dr. Giuseppe Butera, an associate professor of philosophy at PC. “This after Michael had already been threatened with rape a few months earlier. And she feels threatened because he called her a disgrace for refusing to lift a finger to protect him?”

“That is the very definition of chutzpah and it is shameful,” he told LifeSiteNews. “It is also profoundly unjust and it reflects poorly on Fr. Shanley’s administration. As my plain-spoken Calabrian father would say, ‘the fish stinks from the head down.’”

Smalanskas wouldn’t say whether he would pursue legal action against Goodwin or Providence College. He said his main concern right now is that he is being prevented from going to work and therefore not receiving pay he had anticipated.

“The whole thing is so bizarre,” he said.

A representative from Father Shanley’s office did not respond to a request for comment on this story.

The Rhode Island Center for Freedom and Prosperity is setting up a legal defense fund for Smalanskas through freedomfy, a conservative crowdfunding site, he said.

Below are scans of Providence College’s banning of Smalanskas from campus and the restraining order, which is accompained by Kristine Goodwin’s handwritten statement.