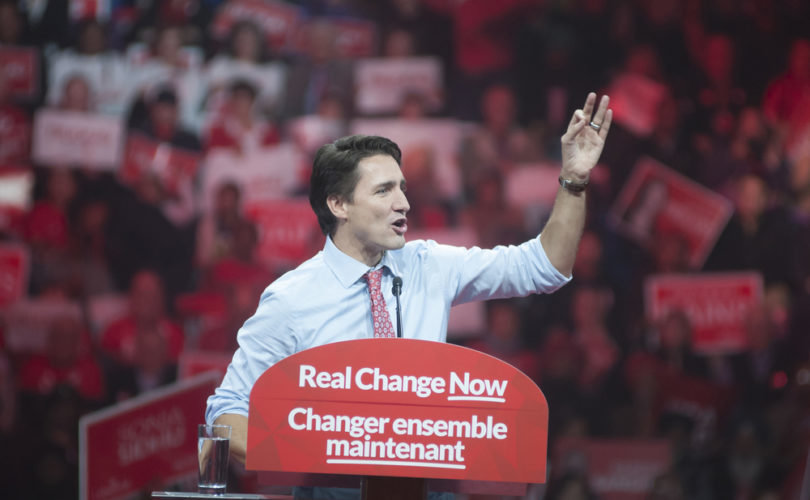 The Liberal summer jobs abortion attestation is, in effect, a “dry run” for such a move, says Gwen Landolt, vice-president of REAL Women of Canada.

If the Liberals don’t experience “serious political fall-out” and “get away with the summer job program, and cutting out faith-based groups as they are now, I think that will serve as encouragement to proceed further,” Landolt told LifeSiteNews.

The House votes Monday on a Conservative motion opposing the attestation, and while “not perfect,” the motion should be supported to stop the Trudeau government from going further down this road, she said.

Landolt noted in a March 13 alert to supporters that the Liberals ran on a promise to review tax-exempt status faith-based institutions and organizations, but didn’t disclose a September 2016 report on the matter.

However, on January 30, a special Senate committee, consisting of four Liberal/Independent senators, and three Conservative, was formed with a mandate to review the charitable sector of the Income Tax Act.

It’s chaired by Independent Senator Terry Mercer, who introduced the motion to form the committee. Mercer is also the former director of fundraising for the Liberal Party of Canada, Landolt noted.

According to her calculations, the Liberals stand to “gain billions of dollars in taxes” if they remove the tax-exempt status from religious and faith-based groups.

“I think this is deliberately set up, because the Liberals see this tax-exempt status to these groups as a loss of their tax money, and they want the money,” Landolt said.

And while the Trudeau Liberals would not at first “go so far as to remove tax-exempt status from churches per se,” Landolt is “almost certain” the senate committee is “going to change the eligibility of groups to receive a tax exempt status.”

And those dropped will be religious-based groups that the government deems “crazy,”she said.

Moreover, the Liberals have the cultural wind at their back. For centuries, the “church, faith, was uppermost, crucial, critical in society,” but for the “past 50 years, it’s been denigrated,” noted Landolt.

“It is argued today that the advancement of religion is no longer a charitable objective,” she told LifeSiteNews. “That’s something new in history.”

With their adoption of the summer job abortion attestation, and their refusal to drop it in the face of widespread and protracted backlash, the Trudeau Liberals show they neither respect nor understand religious faith, Landolt said.

Others have been warning that faith-based groups could lose their charitable tax status, the Catholic Register reported.

The Abortion Rights Coalition of Canada is lobbying that charities that oppose abortion should not receive charitable status, Bussey points out on the CCCC website.

Since the Liberals are “highly attuned to the demands of the pro-abortion community,” this has got to be taken seriously,” wrote Bussey.

“This forms part of the reasoning which compels CCCC and other religious groups to push back against the CSJ attestation requirement. In short, the attestation is but the thin edge of the wedge.”

“We could be in for a major problem with charitable status in this country and ripping the carpet out from so many vulnerable people who depend on charities and their good work,” Raitt told the House March 1 during the debate on the Conservative motion.

It asks the House to agree that “organizations that engage in non-political non-activist work…be able to access Canada Summer Jobs funding regardless of their private convictions and regardless of whether or not they choose to sign the application attestation.”

A number of pro-family groups have been urging supporters to lobby Liberal and NDP MPs to vote for the motion.

Landolt says the Liberals will likely whip the vote, and the motion will be defeated. But the vote will be an “invaluable” public record of “MPs views on the discriminatory Summer Jobs Program.”

And, she notes, “undoubtedly, the Trudeau government will vigorously deny that it has any intention of removing the tax-exempt status from churches and other faith-based organizations. We will see.”