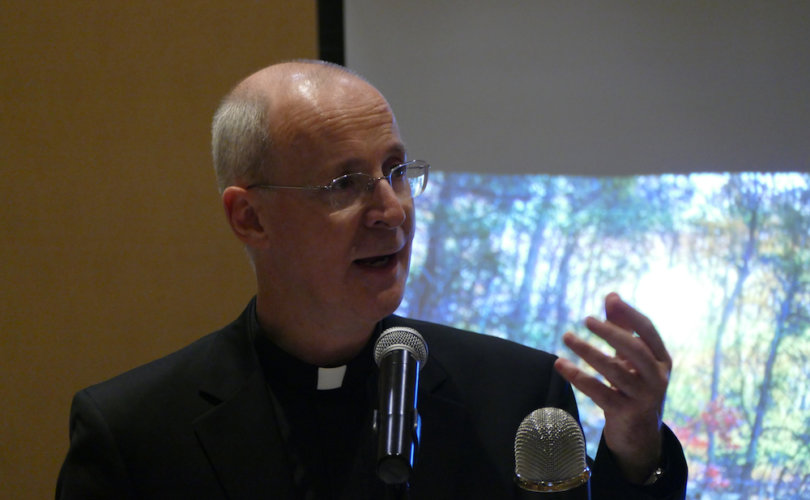 Update: This story has been refocused on Cardinal Wuerl's decision to host Fr. Martin's talk, rather than the content of the talk, which could be open to interpretation. For a description of the talk, see the report (here) by the Archdiocese of Washington's newspaper, Catholic Standard.

Father Martin led an hour of reflection on the Seven Last Words of Jesus at the Cathedral of St. Matthew the Apostle in Washington, the Archdiocese of Washington’s newspaper reported. The talk was followed by the Liturgy of the Lord's Passion, with Cardinal Wuerl presiding.

The editor-at-large for Jesuit America magazine, Father Martin is a frequent promoter of LGBT issues on his prominent social media accounts and in other media.

Pope Francis recently appointed the Jesuit as one of 13 consultants of the Secretariat for Communications.

While Cardinal Wuerl has taken some strong stands for life and marriage, he has also made confusing remarks about the sacrament of marriage and the reception of the Eucharist. He made firm statements in line with Church teaching in the wake of the Obergefell gay “marriage” ruling, but has also made comments implying a softening of Church teaching on homosexuality.

Father Martin’s Good Friday appearance was advertised in the Cathedral of St. Matthew News and Events webpage. He tweeted an invitation to the liturgy, as well as a tweet of “thanks to @Cardinal Wuerl for inviting me to preach.”

Father Martin added the following day on his Facebook page that he was honored by the invitation from Cardinal Wuerl to preach the Seven Last Words liturgy.

In conflict with Church teaching on homosexuality

In February after President Trump reversed the Obama-era edict imposing “transgender” bathroom access in public schools, Father Martin tweeted numerous times support for allowing gender-confused children into the bathroom of the opposite sex.

The priest, who has some 100K Twitter followers, attempted to justify the stance by implying it was one Jesus would take.

In response, he lamented “the level of hatred around homosexuality.”

And he bypassed the Church’s teaching on homosexual activity in selectively stating, “The Catholic church [sic] must do a much better job of teaching what the Catechism says: that we should treat our LGBT brothers and sisters with 'respect, sensitivity and compassion.'”

Specifically regarding homosexuality, Church teaching says that while homosexuals must not be subject to “unjust discrimination,” homosexual tendencies are disordered and gravely immoral when acted upon.

During the 2014 Vatican Extraordinary Synod on the Family, Father Martin posted on Facebook a call to pray for “an end to the kind of language, especially within our church, that may lead to hatred for, rejection of, or violence against gays.”

The post was accompanied by an image of “The Passion of Matthew Shepherd.” Shepherd was the young homosexual man from Wyoming killed brutally in a drug deal gone bad whose story has been exploited by activists to advocate LGBT issues.

In 2012, Father Martin posted an America article from an openly gay priest endeavoring to justify how Catholics could vote against a marriage protection amendment under consideration there at the time.

“Comments will be monitored closely and anything that is mean-spirited will be deleted,” he warned.

Father Martin expressed to a workshop audience at the 2005 LA Religious Education Conference that more open role models of gay priests were needed.

“ … if only there were more public models of gay priests,” he said. “In the absence of any healthy gay priests for Catholics to reflect on publicly, and with the only examples being notorious pedophiles, the stereotype of the gay priest as child abuser only deepens.”

Putting it in print

In his new book titled Building A Bridge: How the Catholic Church and the LGBT Community Can Enter into a Relationship of Respect, Compassion, and Sensitivity, Father Martin argues that Catholic Church employees shouldn't be fired for contravening Church teaching by espousing homosexual acts or openly professing homosexuality.

He accepted an award last year from the pro-homosexual group New Ways Ministry, which has been condemned by the Congregation for the Doctrine of the Faith (CDF) and the U.S. Conference of Catholic Bishops.

During his speech before homosexual activists, Father Martin said the Church should embrace homosexuality’s “special gifts.”

He also praised a 17-year-old for “coming out” on a retreat, and likened sexual tendencies to race and age. Father Martin said the Catholic Church must “lay to rest” its language about the “objectively disordered” nature of homosexual inclinations and acts.

Father Martin claimed that the Catechism’s language is “needlessly cruel” and “needlessly hurtful” because it says “that one of the deepest parts of a person — the part that gives and receives love — is ‘disordered’ in itself.”