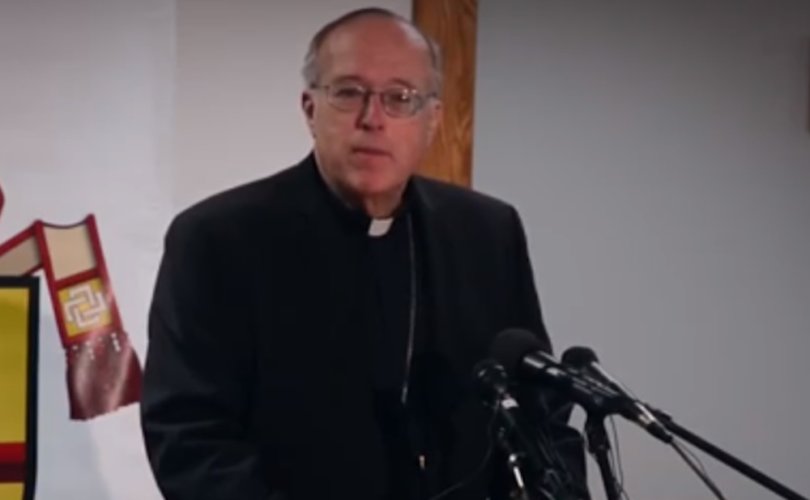 October 17, 2018 (Lepanto Institute) – On October 10, LifeSiteNews reported on one of the listening sessions held by Bp. McElroy at Our Lady of Grace Church in San Diego. During this session, one attendee was chastized because of the concern she expressed over “an openly homosexual man 'running the show'” at St. John the Evangelist parish. According to LifeSite:

After the woman alleged that the parish of St John the Evangelist had an openly homosexual man “running the show,” the Bishop cut her off, saying, “Alright, you've gone far enough now. You're not going to stand here and disparage an employee of the diocese. You can leave if you're going to do that. The other things you can say – you cannot attack an employee of the diocese[.] … I owe it to the employees of the Archdiocese [sic] not to let those calumnies be said.”

In a comment on the article, the woman in question said that the guards at the event rushed her and tried to haul her out.

The openly homosexual man identified as “running the show” at St. John the Evangelist is Aaron Bianco. According to a September bulletin for the parish, Bianco is the Pastoral Associate and runs the Young Adults & Pastoral Outreach ministry.

In 2015, Dignity USA quoted from a Wall Street Journal article on Facebook (which you can access only through a paid subscription), indicating that Bp. McElroy was fully aware of Bianco's homosexuality and assured him that his diocesan job is secure. Given that Bp. McElroy was aware of Bianco's homosexuality, it is unclear what he meant when he said that he would not “let those calumnies be said.”

LifeSiteNews, Joseph Sciambra and Church Militant have already written extensively about Bianco's pro-homosexual activism and his connection to the heretical Call to Action. But concerned Catholics from the San Diego diocese have contacted the Lepanto Institute claiming that Bianco is in a same-sex “marriage.” What follows is the result of the Lepanto Institute's investigation into this claim.

In 2017, the San Diego District Attorney's Office acknowledged Aaron Bianco as a “Citizen of Courage” for keeping his cool when a deranged man entered the offices of St. John the Evangelist parish and threatened to kill a priest. The DA's office interviewed Bianco for this acknowledgement and to recount the ordeal.

At the end of the video (4:06), after explaining what happened, Bianco expressed the thoughts that run through his head and says, “I thought of my husband.” As he says this, an image of Bianco and another man flashes on the screen.

Another image of the same man appears at the 3:58 mark, when Bianco says, “I have a mom who lives with us.”

According to public records obtained by the Lepanto Institute, Aaron Alexander Bianco formerly went under the name Aaron Alexander Smith, indicating that he took on his homosexual partner's last name. Page 14 of this report indicates that Aaron Bianco lives with Joseph Bianco in a condominium just 20 minutes from St. John the Evangelist.

Apparently, Aaron Bianco has been with Joseph for quite some time. In 2010, both Aaron Alexander Smith and Joseph Vincent Bianco were sued in small claims court by Maricela Macias.

Given that Bianco is in a self-admitted homosexual “marriage,” it is the supreme height of irony that St. John the Evangelist parish identifies him as the point of contact for couples preparing for marriage.

Bianco is currently listed as a lecturer at the University of San Diego, which is supposed to be a Catholic university. Bianco is also identified as a speaker at the upcoming Santa Clara Faith Formation Conference, taking place November 29-December 01. Bianco's bio says that he is a “professor of Theology at the University of San Diego and is the coordinator for LGBT Ministry for the Diocese of San Diego.” He is slated to give two presentations. The first one, titled “Gender Identity and the Catholic Church, What educators and administrators should know,” is described as follows:

Gender identity and transgender issues have become hot topics. How does the Gospel teach us to serve young Catholics on their journeys? How are we called to be loving in the midst of challenging theological questions? In this session, I'll share experiences and offer theological reflections to inform a pastoral approach for students who question their gender identity.

The second presentation is titled, “Let's talk about Gender Identity in our parishes,” and is described as follows:

How can we as catechist and lay leaders bring the compassion that Pope Francis is speaking about when it comes to gender identity in our parishes. This session will focus on real examples of ways Catholic parishes and schools have dealt with gender identity and how can we learn from these examples.

We asked in the beginning what could possibly be “disparaging” or “calumnious” about identifying Aaron Bianco as being an openly homosexual man, as Bp. McElroy claimed as he tossed a concerned Catholic out of one of his listening sessions. It is clear that Bianco is not only an openly practicing homosexual, but in a self-admitted homosexual relationship he calls a “marriage.” What else is clear is that on at least two different occasions, Bp. McElroy personally defended this man as an employee of the diocese of San Diego.

Regardless of the reasons, the simple fact of the matter is that same-sex so-called “marriage” is strictly forbidden in the Catholic Church, and as such, Aaron Bianco has no business being employed by a parish, the diocese or a Catholic university. And yet, he is employed by all three. It is unconscionable for Bp. McElroy to defend employing an individual for work within the Catholic Church when this individual's very life is a testimony against the very core of her most basic moral teachings. What makes it worse is that Aaron Bianco is acting as a representative of the Catholic Church as an “outreach minister” and a “pastoral associate.” And worst of all, his role as a so-called diocesan coordinator for LGBT Ministry is a hypocritical mockery of the Church he represents. It is absolutely impossible for someone living in a mockery of Christian marriage to lead people with same-sex attraction in accord with Catholic teaching. Even if he mouths the Church's teachings, his own example is a stark contradiction to those very teachings.

The Lepanto Institute has created a petition, asking Bp. McElroy to terminate the employment of Aaron Bianco for causing scandal to the faithful through his gross disregard of Catholic moral teaching while acting as a representative of the Catholic Church.

Please sign the petition at the link here, and ask as many Catholics as you know to sign it as well.