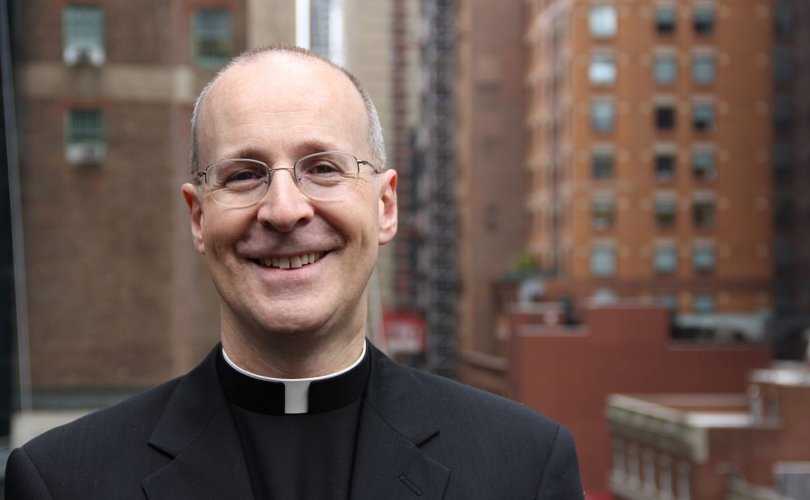 WASHINGTON, D.C., September 12, 2017 (LifeSiteNews) – A faithful Catholic lay apostolate was suspended by Twitter last week after Vatican adviser Father James Martin complained about a tweet that teasingly stated the pro-gay Jesuit had been bested in a theological debate on the social media platform.

Father Martin claims that a Catholic Vote tweet urged violence against him and reported CV to Twitter, resulting in the group’s suspension.

“Enough,” the Jesuit tweeted. “When you urge violence against me, even in a supposedly joking way, you cross the line. You’ve been reported to Twitter. Enough.”

The now-deleted tweet to which he was replying said, “And then this Dominican showed up and started beating @JamesMartinSJ like a rented mule. The crowd went wild.”

Father Martin did not respond to LifeSiteNews’ inquiry about his perception of the tweet or specifics of how additional reaction has played out.

Catholic Vote confirmed for LifeSiteNews the group was suspended from Twitter for 12 hours as a result of the priest’s complaint.

CV disputes Father Martin’s assertion that the tweet called for violence and says the high-profile priest was just trying to shut them down.

“Any reasonable person would realize that the tweet in question was a figure of speech,” CV communications director Joshua Mercer told LifeSiteNews. “If someone were to say he totally burned him, should we call the fire department?”

“To suggest that our tweet was an incitement to violence is total garbage and can't be taken seriously,” Mercer said. “That Fr. Jim Martin called on Twitter to suspend our account over a figure of speech suggests that he's not really interested in building bridges, but in shutting people down.”

Mercer’s reference to building bridges stems from the title of Father Martin’s latest book that calls for dialogue between the Catholic Church and LGBT-identifying Catholics.

The book, based in part upon an award he received last fall for the Vatican-censured, dissident New Ways Ministry homosexual advocacy group, also calls for the Church to change its Catechism language in regard to Catholics who experience or act upon same-sex attraction or gender confusion to be more welcoming.

It also calls for an end to firing employees of Catholic institutions who publicly dissent from Church teaching on sexual morality — even though that is an established expectation of Catholic employees.

Reaction to Father Martin getting Catholic Vote kicked off Twitter included C-Fam President Austin Ruse calling the Jesuit out for his handling of the CV tweet.

Ruse charged Father Martin with bearing false witness against Catholic Vote, and in doing so propelled the debate into high gear.

“@jamesmartinsj 's response to a figure of speech is so pansified. I do believe he's out of the closet,” Ruse said in the now-deleted tweet.

“He reacted like a snowflake would,” Ruse told LifeSiteNews. “He took something that bothered him and he ran to teacher for protection.”

Father Martin typically doesn’t respond on social media to criticism he receives. His followers do, though, on his behalf, often harshly and without deterrence from him.

Ruse’s response, as with Catholic Vote’s tweet, did generate reaction from the celebrity priest.

The narrative in Father Martin’s response was that Ruse called him a pansy outright when Ruse’s response referenced the priest’s reporting CV to Twitter and the way in which he did so as “pansified.”

Father Martin also called attention on Twitter to the fact Ruse writes a column for Crisis Magazine and is a member of two Catholic fraternal organizations. And he took the opportunity to say Ruse’s tweet was example of hatred and evidence that real homophobia is alive in “high echelons” of the Church.

“Insults like “pansy” are what LGBT people hear, even from Catholics (a columnist @Crisis) Hatred strengthen my desire to advocate for them,” he tweeted, and, “The man who uses the word “pansy” on Twitter is both a Knight of Malta and of the Holy Sepulchre. So homophobia exists in high echelons.”

Significant back and forth was ongoing on social media in the days after the Twitter suspension. Ruse insisted throughout that Father Martin slandered Catholic Vote, lying in the process, and that Father Martin lied about the specifics of Ruse’s response.

Ruse repeatedly challenged the priest on this and also his approach to homosexuality and the Church. Father Martin’s response began and ended with his claim of CV’s purported encouragement of violence and assertion that Ruse used a homophobic slur against him, and that this was a “teachable moment” on homophobia in the Church.

Ruse drew the expected extreme pushback from the Jesuit’s followers, but also had one or two critics on his side saying he was insufficiently charitable in his choice of language.

Ruse told LifeSiteNews regarding the use of politically incorrect speech in the debate that different people use different language in the fight and that some aren’t willing to take the gloves off.

“You’ve got to tell home truths about what these people are doing,” he said.

Ruse stressed that the real issue is Father Martin’s lie about both Catholic Vote and his response – and more so that Father Martin consistently does so about the issue of homosexuality and the Church changing its teaching in that regard.

“He lies to thousands of young men and women about their condition in life,” Ruse stated. “And he’s leading those men and women to perdition.”

He maintains the real matter is the Jesuit priest leading people astray in matters of faith and morals.

“I don’t regret characterizing Father Martin as a liar or saying that he acted like a snowflake,” Ruse told LifeSiteNews. “The opportunity it has afforded us is to show he’s a liar on a much larger issue.”

The Twitter suspension came amid growing concern that big tech and media companies led by progressives are censoring conservative, pro-life and other traditional or faith-related voices.

Twitter suppressed Live Action’s pro-life ads this past summer because they were critical of Planned Parenthood or showed images of unborn children in the womb. Last month, Twitter banned an ad for a book titled “One Man One Woman: God’s Original Design for Marriage” because the ad violated Twitter’s “Hate” policy.

Twitter’s suspension of Catholic Vote also reflects a growing concern that dissenters from Church teaching are more emboldened to speak out during the Pope Francis pontificate.

Pope Francis appointed Father Martin as a consultor to the Vatican's Secretariat for Communications in April.

The Jesuit is one of 13 consultants chosen from across the world to advise the Vatican on its communications operations.

The pope had created the new dicastery in June 2015, consolidating all of the Vatican’s communications entities under one department. The secretariat is responsible for several Vatican communication offices, including Holy See Press Office, Vatican Radio, the Holy See's website and the pope's Twitter account @Pontifex.

Father Martin has been an advocate for LGBT issues for some time, vocally affirming those who experience and act upon LGBT inclinations.

He has been criticized for misleading people by giving the impression that Church teaching on homosexuality may change in the future – when that is not a possibility. And he has sparked controversy for neglecting to speak the truths taught by the Church to individuals who act upon LGBT inclinations and commit sexual sins while doing so.

He has tweeted support for gender-confused persons to have access to restrooms of the opposite sex and criticism for those who spoke out against the Obergefell v. Hodges decision legalizing gay “marriage.”

Editor-at-large for Jesuit-run America Magazine, Father Martin is continually given a speaking platform in Catholic venues and uses his extremely large high-profile social media accounts to champion his stances.