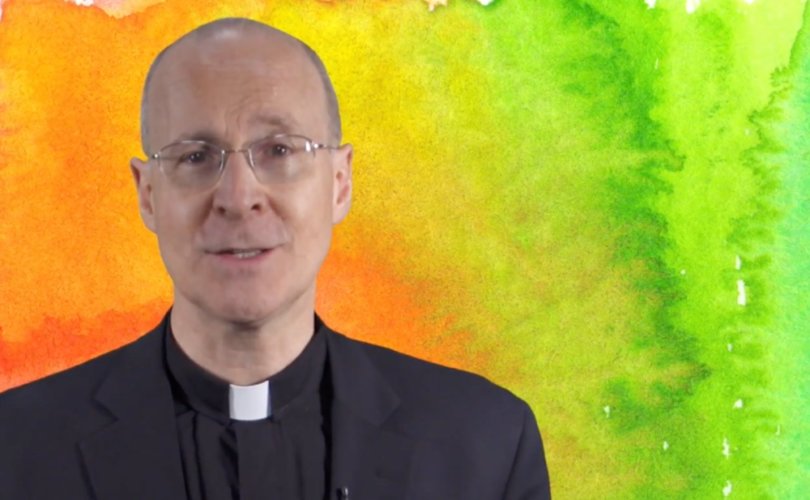 NEW YORK, August 16, 2018 (LifeSiteNews) – Vatican advisor and pro-homosexual Jesuit priest Fr. James Martin claimed in an interview that homosexual sex-abuse of seminarians is not “rampant” in the Church.

Commenting on revelations that ex-Cardinal Theodore McCarrick had groomed and sexually molested young seminarians, PBS anchorman John Yang asked the Jesuit priest if this kind of abuse was a problem in the Church.

“Do you think there is more to this in the Church with adult seminarians?” Yang asked.

“No, I don’t,” said Fr. Martin. “I think that Cardinal McCarrick’s case is really extraordinary. The idea that he would have a house on the Jersey Shore and…bring people there. I think that’s very unusual.”

“I think, as in any organization, there are abuses of power and even improper sexual advances,” the priest continued. “But I don’t think that this is rampant, and I think his case is really kind of an outlier.”

Martin’s assertion is contested by researchers such as Father Dariusz Oko who in 2013 exposed a gay network of homosexual priests and bishops in the Church. These have not only abused seminarians, teenagers, and children, but have created a “mafia” of powerful clerics who protect the abusers and ensure their advancement in the Church’s ranks.

Oko told LifeSiteNews in July that McCarrick is merely the “tip of the iceberg” and that up to 50 percent of U.S. bishops have “homosexual inclinations.”

Schmitz was referring to only a few of the scandals involving the sexual abuse of Roman Catholic seminarians that have come to light in recent years.  Marciel Maciel, the founder of the Legion of Christ, abused several children and adults, including seminarians, over decades. Cardinal Keith O’Brien allegedly tried to embrace a frightened seminarian in his office during his stint as rector in the late 1970s. Fifty seminarians in Honduras wrote a letter to their formators this past July complaining about a homosexual network in their seminary, a group allegedly protected by Francis-insider Cardinal Maradiaga. In Ireland, three former seminarians have come forward to detail psychological abuse they suffered at the famous foundation of St. Patrick’s College, Maynooth. One alleged that he had been the subject of unwanted homosexual advances.

The extent of abuse of seminarians in the U.S. is only beginning to be grasped. On August 1, a former seminarian named Peter Mitchell reported that sexual advances had been made to him by a former Lincoln archdiocese vocations director, the late Monsignor Kalin. (Like McCarrick, Monsignor Kalin also allegedly brought young favorites to a beach house on the Jersey Shore.)  Later this month, a former seminarian named John Monaco detailed unwanted homosexual advances and homosexual acts he witnessed in two East Coast seminaries: St. John’s in Brighton, Massachusetts and St. Charles Borromeo seminary in Wynnewood, Pennsylvania.

Martin is the editor-in-chief of America magazine and the author of several books, including Building a Bridge: How the Catholic Church and the LGBT community can enter into a relationship of respect, compassion, and sensitivity. He uses his large social media platform to promote homosexuality and lobby the Church to change its teachings on homosexuality. The Jesuit was appointed to be a Vatican communications consultant in 2017. Before that, he had already begun to rise to fame as one of the most vocal supporters of homosexuality in the Church.

Earlier in the PBS News interview, which took place in mid-July, Yang asked Martin to account for the swift action that took place to remove McCarrick from ministry once a credible allegation of abusing an altar boy had been made versus long inaction to allegations “about adult seminarians.”

“I’m not a lawyer, but I think one is technically illegal,” said Martin. “It’s a crime and I think that sort of puts into place the reforms of the Dallas Charter, in which someone is immediately removed. And I suppose these other things, these accusations took a while to be unearthed.”

Nevertheless, Martin told Yang that “allegations” about adults were a “very serious matter.”

“It’s not only a grave crime against somebody’s person, right?  It’s an abuse, an emotional abuse, sometimes a physical abuse. It’s also sinful, and it’s also breaking the promise of celibacy you have as a priest, so in multiple ways it is wrong.”

He said it was “mystifying” to him that McCarrick, with his decades-long history of abuse, was at the forefront of the Church’s new policies guarding against it.“