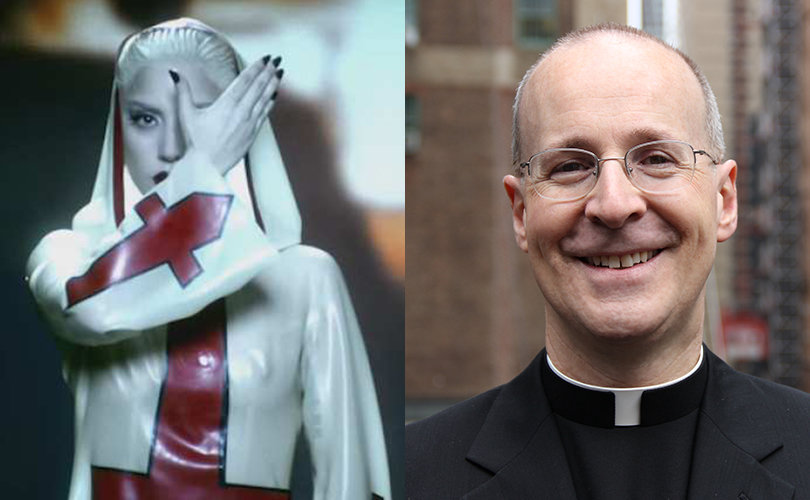 July 6, 2017 (LifeSiteNews) – Jesuit Father James Martin, who Pope Francis recently made a consultant to the Vatican, said on Good Morning America that he likes the “born this way” message of Lady Gaga.

The song “Born This Way” is widely used as an anthem for the LGBT lobby. It features lyrics like “No matter gay, straight, or bi / Lesbian, transgendered life / I'm on the right track baby / I was born to survive” and “a different lover is not a sin.”

“I was born this way” is repeated about 30 times throughout the song.

“In your book Building a Bridge, you start with this psalm: 'You knit me together in my mother’s womb. I praise you, for I am fearfully and wonderfully made,'” ABC's Dan Harris said to Martin. “Some of my colleagues here at GMA noticed there's some similarity here to Lady Gaga's 'Born This Way.'”

“I think she got it from the psalm, probably not the other way around…A little theology there,” Martin laughed.

“But you like the message she's spreading?” asked Harris.

“Oh, I do!” replied Martin. “I mean, you know, the sort of shorthand I saw on a bumper sticker once is God doesn't make crap, basically…We are fearfully and wonderfully made. We're all beloved children of God and I think that's one of the prime messages I'm trying to get across in this book to LGBT people.”

Martin said “Pope Francis” and the fact that “more and more Catholics” are coming out as homosexual are “signs of change” within the Church. He told Harris that he thinks being nice to the Catholic Church is “a very bitter pill” for the gay community to swallow.

“I'm very clear in the book the onus is on the church because it’s the institutional church that has marginalized the LGBT community, not the other way around,” he said.

Harris noted “some conservative Catholics were not happy with” Martin's new book.

“What kind of pushback did you get from those corners?” he asked.

“Well, unfortunately, a lot of people are against the whole topic of welcoming LGBT Catholics – they think it's…caving in, which I think is ridiculous,” said Martin. “All I'm calling for in the book is respect, sensitivity, and compassion, which is part of the catechism.”

Martin only partially cites the Catechism and even advocates changing some of the language it uses.

“Basing itself on Sacred Scripture, which presents homosexual acts as acts of grave depravity, tradition has always declared that 'homosexual acts are intrinsically disordered,” the Catechism says (CCC 2357). “They are contrary to the natural law. They close the sexual act to the gift of life. They do not proceed from a genuine affective and sexual complementarity. Under no circumstances can they be approved.”

The “inclination, which is objectively disordered, constitutes for most of them a trial,” the Catechism says of same-sex desire (CCC 2358). It doesn't label people – only attractions and actions – disordered.

People with same-sex attraction “are called to fulfill God's will in their lives and, if they are Christians, to unite to the sacrifice of the Lord's Cross the difficulties they may encounter from their condition,” the Catechism continues. “Homosexual persons are called to chastity. By the virtues of self-mastery that teach them inner freedom, at times by the support of disinterested friendship, by prayer and sacramental grace, they can and should gradually and resolutely approach Christian perfection” (CCC 2358 – 2359).

Martin has said he doesn't think one of the “deepest parts of a person,” the part that “gives and receives love,” should be labeled “disordered.”

Catholic apologist Michael Voris, who himself was active in the gay lifestyle before coming back to the Church, responded to Martin by saying that not all sexual acts are acts of love, and not all acts of love are necessarily sexual.

Fr. Martin wants to make homosexuality out to be just a different thing with its own order, that we must respect and have compassion for. When he keeps talking about compassion and care and respect, he deliberately blurs the line between the person with same-sex attraction and the sexual acts. He blurs a further distinction between sexual acts and giving and receiving love.

One need not have to engage in sexual acts to love another, and likewise, just because a person does engage in sexual acts, does not mean they love. But see, to bring forth these critical distinctions would completely destroy Martin’s position; and he knows it. That’s why he lets them just hang there in the ether.

He diabolically twists “objectively disordered” into “differently ordered” and leaves unchallenged the assumption that one must engage in sexual acts if the person loves. This kind of evil on the part of a priest can only merit Hell, if unrepented…if he died unrepentant of this gross calumny against the Faith, how could he possibly hope for salvation?

None of this said to be mean and all those stupid charges. It’s said out of a terrible concern for his soul. No Catholic could ever want or hope for another person to be damned, much less a priest. Especially a priest. St. Teresa of Avila said that when she was shown Hell, she could distinguish which souls were those of priests because of the intense agony they felt in their hands — the horrible burning where the holy oils had been administered to them on the day of their ordination.